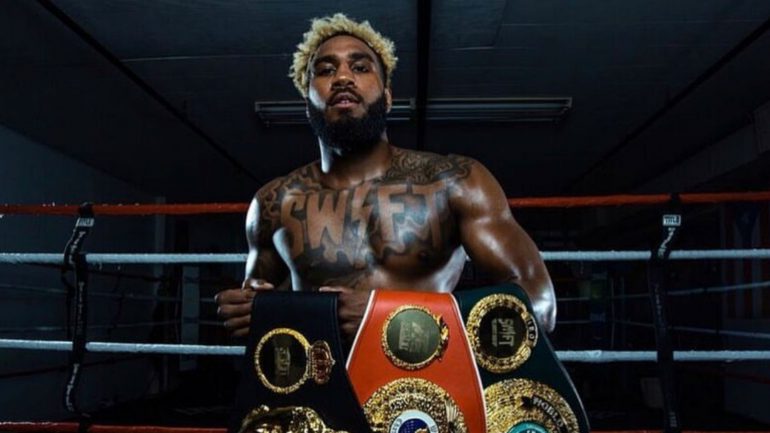 11
May
by Sporting News

During the four-belt era, there has never been an undisputed champion at 154 pounds. The closest the division came was in November 2004 when Winky Wright defeated Shane Mosley to add the WBA (Super), WBC titles to his IBF belt and become the first and only three-belt titlist.

As things currently stand, 28-year-old Jarrett Hurd is at the top of the mountain as the unified junior middleweight champion. Hurd won the vacant IBF title in February 2017 by ninth-round TKO over current WBC titleholder Tony Harrison. Then he gained the WBA (super) belt in one of 2018’s best fights, beating Erislandy Lara by majority decision. All that’s left for Hurd is the WBO championship, currently held by Jaime Munguia and the WBC strap that’s right now around the waist of Harrison.

Hurd (23-0, 16 KOs), who puts his two pieces of hardware on the line Saturday night against Julian Williams (8 p.m. ET, Fox), wants to make history and hold all four belts simultaneously but isn’t going to wait forever to get the opportunity to do so.

“I definitely want to be undisputed,” Hurd told Sporting News on a conference call last week. “It all depends because I’m such a big junior middleweight. Every fight is getting more and more difficult to make the weight.

“Even though I came in underweight and was 152 when I fought against Welborn, it’s just that I’m putting on more weight in between fights and even though I’m making it, to me I don’t think it’s healthy to be dropping that amount of weight for a fight. Even though I’m light, I still feel strong. I want to wait for the WBO after I win the WBC, but if the opportunity isn’t presented to me, I’ll move up.”

After the Lara fight, things were heading towards a title unification showdown this year between Hurd and then-WBC champion Jermell Charlo. Hurd completed his end of the bargain, returning to the ring in December after having shoulder surgery to score a fourth-round knockout of Jason Welborn. Charlo just had to complete his end of the bargain against Harrison at the end of December.

Harrison threw a monkey wrench into those plans by winning a controversial decision to win the belt. They will meet once again on June 23. For Hurd, the desire to face Charlo is no longer the central focus. Now, it’s just about getting one step closer to his goal.

“There was a wrench in the plans when Jermell Charlo took a loss,” Hurd said. “A fight with him I don’t think about no more because he’s still got to get past Harrison the second time. I’m not more focused on fighting him. I’m more focused on getting (the) WBC (belt). So if he (Charlo) does win, I’ll be looking forward to fighting him, and if Harrison wins, I’ll be looking forward to fighting Harrison, too.”

This weekend’s clash with Williams is an essential home game for Hurd. The fight which takes place at the Eaglebank Arena in Fairfax, Va. is just under a 29-mile drive from his home in Accokeek, Md. When the proposition of fighting in his proverbial backyard was brought up as a possibility, “Swift” didn’t hesitate to get a chance and do what many fighters dream of being able to do and continue his quest towards history.

“It was my hometown, so it was everything,” Hurd said. “To win the world title was great. It was always a goal of mine to become a world champion, but I accomplished that two times. I just wanted to defend it in my hometown. So to be able to get this opportunity to bring it back here is special. Now we’re able to get things down with the EagleBank Arena in Fairfax. Virginia is good enough so I’m just happy that people that couldn’t make it out to the fight that was in other states can make it to this.”