Tom Loeffler: ‘GGG versus Canelo is the biggest fight in the middleweight division’ 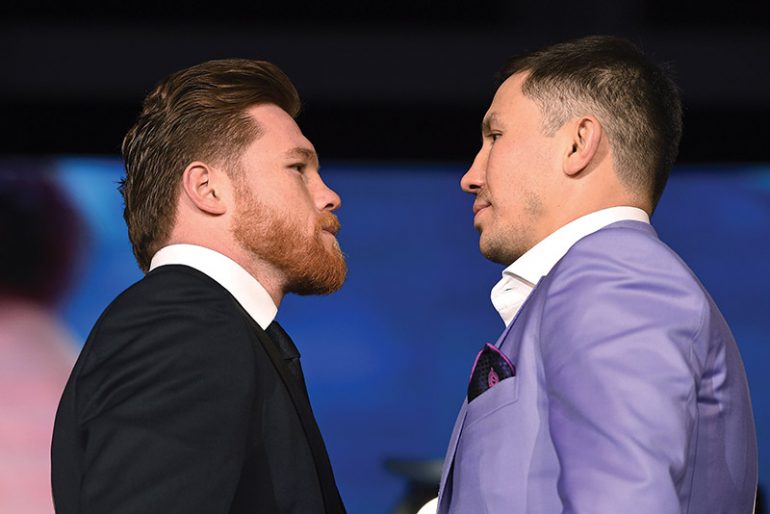 Canelo (left) and Golovkin. (Photo by Kevork Djansezian/Getty Images)
06
May
by Michael Woods

The Canelo vs. Jacobs match was more an advertisement of skills than the contained fury many had hoped for.

No, it was nothing close to Marvelous Marvin Hagler vs. Thomas Hearns, and shame on any of us who thought that might occur. But I don’t think we should be harshly punished for being hopeful. Maybe we should adjust our thinking ahead of these mega-fights, and perhaps adjust what sort of filters we are employing, be as discerning as possible when pondering what type of fight will actually play out.

Regardless, it was interesting to see storylines play out early Sunday morning, into Sunday day and beyond.

One element of coverage that stood out was Gennady Golovkin’s post-fight take. He said on air, then Tweeted, that he was disappointed by the scrap. Looked like a sparring match to him. Some agreed, and some folks took issue with that. Looked to me like people were pretty split on how they viewed that hot take. 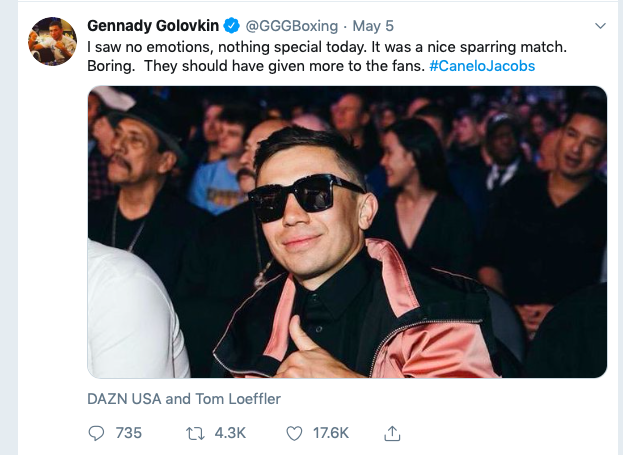 Tom Loeffler, who works to promote Golovkin, checked in with The Ring. He didn’t disagree with his guy, “(Declaring that GGG’s take on Canelo-Jacobs being labelled petty) was unnecessary as it was a boring fight compared to GGG fight with Jacobs and both Canelo fights.”

Then, this… lots of fight fans on social media came out and said they’d prefer to see more unification, and have Canelo, now holder of The Ring, WBC, WBA and IBF 160 titles, fight WBO titleholder Demetrius Andrade. That surprised me and had me pondering why so many folks seem to NOT want a third GGG bout.

The first was solid, the second was better and one would assume that a third would be a good to watch – at worst – bout.

We know how these styles mesh and we also know that this version of Golovkin might be even more interesting in a leadup to a third clash. I’m not sure how many of the folks who are lobbying for a Canelo vs. Andrade clash have seen much of Andrade in action. He is very skilled and very risk averse. Put his fighting style against Canelo, who is also very skilled and not a severe risk taker, and I’d be surprised if we had more dramatic moments in that bout than we did in the Canelo vs. Jacobs match. (Part of that lack of drama has to do, arguably, with Canelo’s tremendous chin. Man doesn’t get even half buzzed off of shots that would wobble most guys.)

So, what does Loeffler think of that call for Canelo-Andrade, over Canelo-GGG 3?

“GGG versus Canelo is the biggest fight in the middleweight division and the fight that the fans want to see,” Loeffler told me. “There is unfinished business between the two as most fans and media thought that GGG won the first fight and should still be the champion after the second fight.”

What say you, Ring readers?

You want that one champ in the division, a total title consolidation bout next? Or would you rather have the more “known” quality of another Canelo vs. GGG scrap?