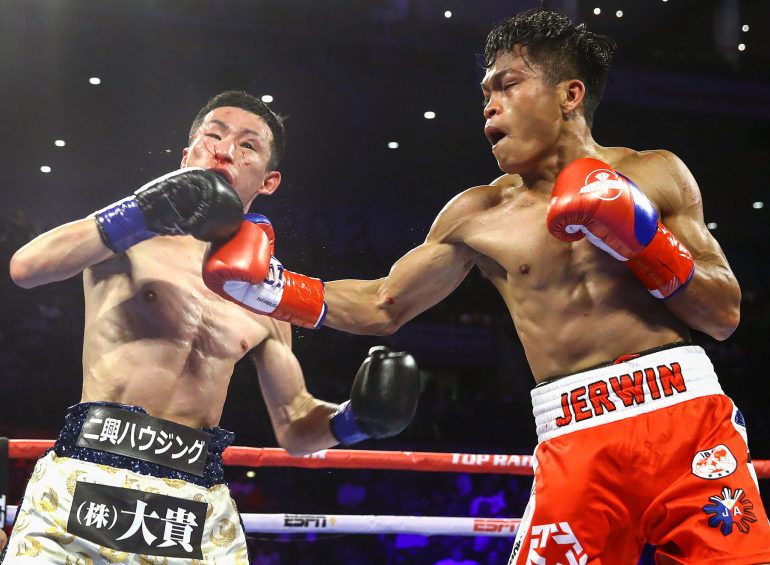 Photo by Mikey Williams/Top Rank
06
May
by Ryan Songalia

It was a new day dawning for Team Ancajas when the sun rose over Northern California on Sunday morning. Matchmaker Sean Gibbons wasn’t looking at his fighter Jerwin Ancajas as the owner of a 31-1-2 (21 knockouts) record, or viewing his reign as IBF junior bantamweight title from the totality of seven defenses. He sees Ancajas’ record as 1-0, putting behind him a pair of fights that had taken the luster off his title reign and raised questions about how high the Filipino’s ceiling was.

“Boxing is very forgiving. Nobody gives a shit about what you did the other [30-plus fights]. All they care about is what you did last night,” said Gibbons the day after Ancajas broke out of a slump, thanks in part to an accommodating style from mandatory challenger Ryuichi Funai (31-8, 24 KOs).

“His style really helped because he comes in and he really wants to exchange punches,” said Ancajas, describing the tall, upright aggressor from Japan, whom he stopped one second into the seventh round in Stockton, Calif.

The Ancajas team knew there was a cloud hanging over his title reign stemming from a dip in form against Jonas Sultan, and more starkly, a draw against Alejandro Santiago in the fight prior. Gibbons described a pre-fight meeting with boxers turned ESPN commentators Timothy Bradley and Andre Ward as “tense” as they critiqued Ancajas’ recent performances, but Gibbons argued that you’re not always going to look good against every opponent, even if you win.

“Wasn’t a lot that he did wrong except he got a little excited and swung a few for the fences that would have left homeboy’s head back in Tokyo,” said Gibbons. 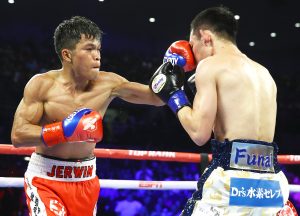 The feedback Gibbons was most interested in came from promoter Bob Arum, who had expressed disappointment after Ancajas’ last two outings but was once again enthusiastic about the 27-year-old Filipino after the Funai victory.

“Bob’s great because it doesn’t take that much to get him back on the bandwagon,” said Gibbons.

The name Arum threw out for Ancajas’ next defense was Andrew Moloney, the 28-year-old Australian with a 19-0 (12 KOs) record who is coming off an eighth round KO of Miguel Gonzalez in Chile. Ancajas says he’s seen him a few times on YouTube, and Gibbons likes the matchup, but Moloney’s manager Tony Tolj tells The Ring that they’re heading down the WBA route (the Gonzalez fight was a WBA title eliminator) and waiting for the Kal Yafai-Norbelto Jimenez title fight to play out on the Joshua-Ruiz undercard next month in New York.

“I heard,” Tolj said, regarding reports, “but it is not happening.”

Juan Francisco Estrada, the division’s new champion after defeating Srisaket Sor Rungvisai in their rematch, remains the ultimate target, though Gibbons admits it’s a tough fight to make with the Mexican over at DAZN. Even with the loss, Sor Rungvisai would still be an attractive fight to make because of how he’d mesh with Ancajas.

“Jerwin with Sor Rungvisai, I still think is tremendous because of the Asian style, the flat-footed [approach]. Estrada would be very difficult because Estrada for a Mexican boxes very well, in and out. But I still rate Jerwin in the top 3 of the champions out there,” said Gibbons, who adds that he has his eye on third rated Alexandru Marin (17-0, 11 KOs), a Romanian now based in Maryland who faces Luis Concepcion on the Jarrett Hurd-Julian Williams card next week.

“I hope I will fight them,” Ancajas said of Estrada and Sor Rungvisai.

Gibbons expects Ancajas to return to the ring in October, and says he’d like Ancajas’ next opponent to be someone who makes “Pretty Boy” look a bit prettier for TV.

“I’m looking for anybody that wants to rumble, that wants to come and fight, that’s what we want to go with until we can get that signature marquee fight over the next 6-to-8 months,” said Gibbons.

In the meantime, Ancajas will be spending the rest of the week as a tourist, and is expected to take a trip down to Las Vegas before flying back to the Philippines on the 12th.