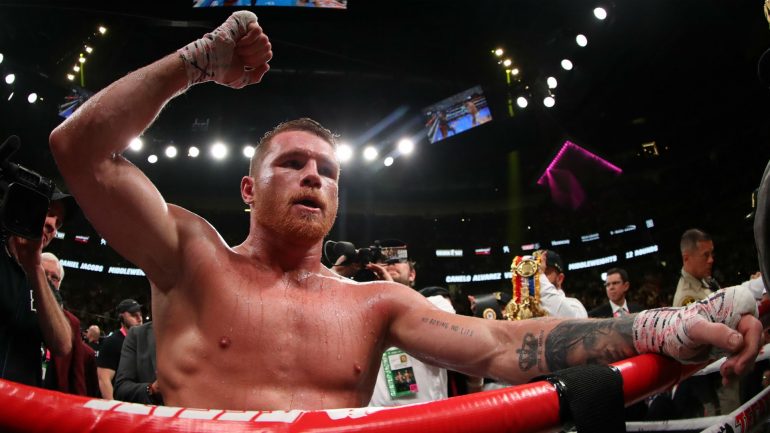 Oscar De La Hoya says Saul “Canelo” Alvarez has yet to discuss his next moves, but suggested potential options include fights with Sergey Kovalev, Callum Smith or a third installment against Gennady Golovkin.

Canelo added the IBF middleweight title to his WBA and WBC belts with a unanimous points win over Daniel Jacobs in Las Vegas on Saturday.

In the immediate aftermath, the Mexican hinted he would be open to another meeting with GGG, having defeated the Kazakh last September following a contentious draw between the pair the previous year.

“I mean who fights Golovkin back to back and then Jacobs?” De La Hoya said. “We haven’t spoken about his next fights. He has lots of options. For now, we’ll enjoy the victory and within time we’ll see what’s next.

“There’s lots of options for him. Callum Smith, Kovalev at 175 [lbs]. He has lots of options. One thing about Canelo is he never shies away from a challenge. Canelo’s wish is to unify all the belts. Canelo has expressed interest in fighting in Wembley Stadium in England [or] Dallas. A trilogy with GGG is also possible.”

CANELO VS. JACOBS: Missed the fight? Watch the full replay on DAZN

On the win over Jacobs, De La Hoya added: “What a beautiful weekend for Cinco de Mayo. Our champion won in what was a close and difficult fight.

“Now let’s celebrate this Cinco de Mayo. It was a wonderful fight. Jacobs is an amazing champion. I had Canelo winning by two or three points. Jacobs is a warrior. We are pleased.”