Gray Matter: Who’s next for a Canelo Alvarez lottery win? 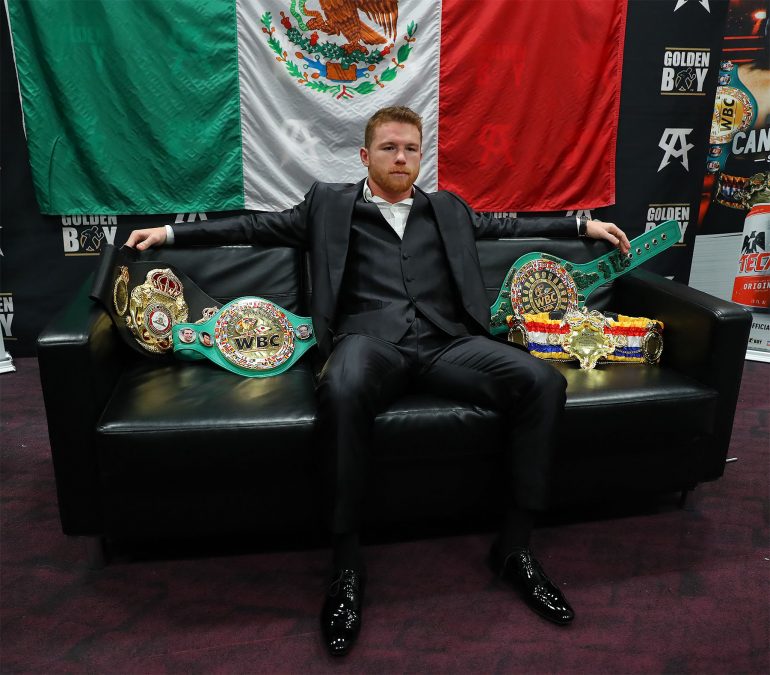 Canelo poses with his many middleweight world titles, including the Ring Magazine championship belt, after his unanimous decision over Daniel Jacobs. Who's next for the champ?
05
May
by Tom Gray

So what did we learn before, during and after Canelo Alvarez’s 12 round unanimous decision over Daniel Jacobs on Saturday?

Well, first up, we know that Jacobs can afford to lose $1 million after he failed to make the contractually agreed 170-pound second weigh-in limit early on Saturday morning. Team Canelo had stipulated that “The Miracle Man” would have to front $250,000 per pound or up to $1 million and, at 173.6, this looks like a seven-figure infringement.

Secondly, we know that Canelo and Jacobs are terrific prizefighters but we knew that coming in. Canelo’s performance during the early sessions was as good as it gets and there were times when he looked levels above. However, for Jacobs to adjust as well as he did at the midway point and bank a few rounds is a mark of his overall quality and fighting guts. He just needed to make his move a lot sooner.

Right now, however, it’s all about Canelo. His next assignment is likely to take place on Sept. 14, although there are so many options available for the pound-for-pound star that he might very well alter his dance card. Potential opponents from 154 to 168 pounds are circling like sharks, hoping to dethrone the 28-year-old from Guadalajara and score a career-high payday in the process.

Here we look at seven potential opponents – some more realistic than others – and give them a score out of 10 in terms of how likely they are to hit the jackpot.

It’s not happening, is it? First of all, last night’s fight wasn’t the classic middleweight encounter some had expected. There were cameos of brilliance from both men, but the action was never sustained, and some of the crowd at the T-Mobile Arena were actually booing as the seconds ticked away in the final round. Also, if Jacobs had won, then his decision to ignore the rehydration clause would have been a masterstroke. As is stands, Team Canelo wouldn’t trust him for a sequel. No, if Jacobs wants back into the Canelo sweepstakes, he’ll have to come through the side door. And there aren’t many options available right now.

Yes, we’ve seen it twice but we’d sign up for the trilogy in a heartbeat. Canelo fought the fight of his life to defeat GGG by majority decision in their September 2018 rematch and scoop up Ring, WBC and WBA middleweight titles. It was arguably a career-best performance, but many fans remain unconvinced about the Mexican’s superiority. Make no mistake, Canelo is aware of that and a chance to rubberstamp his dominance over the hard-hitting Kazakhstani will be very tempting. This is still the biggest middleweight bout available and both fighters have signed lucrative deals with DAZN who would love to get it made. First, GGG has a minor speedbump named Steve Rolls to contend with on June 8.

If Andrade didn’t have the only middleweight title belt Canelo doesn’t have, then the likelihood of this fight taking place would be 1/10. Who the hell needs a crafty, strong, unbeaten southpaw who is lacking in star power? Andrade has his own parking space at the Who Needs Him Club, but that piece of WBO hardware might be his saving grace. Canelo is desperate to become undisputed champion at 160 pounds and the event is very marketable on that basis. Is it as big as GGG III? No, but it’s big enough for both fighters to earn bumper paydays and make history. First, Andrade must get past Maciej Sulecki on June 29.

Jacobs dwarfed Canelo but this would be something else entirely. Canelo might actually develop neck pain from looking upwards. Smith, The Ring and WBA super middleweight champion, is 6-foot-3-inches tall and a massive 168-pounder. The unbeaten Englishman is desperate to secure the biggest fights available and has even expressed interest in moving north to light heavyweight. However, if Canelo comes to the negotiating table, you can bet Smith will punch down walls to join him. The only sticking point is location because Team Smith may try to lure Canelo to the U.K. for such a showdown. If he took the fight, Canelo would have the chance to become a three-weight Ring Magazine champion. Smith is currently scheduled to appear on the Anthony Joshua-Andy Ruiz Jr. card on June 1.

Stylistically, Saunders may present more problems for Canelo than any other fighter between 154 and 168 pounds. He’s quick, elusive, fleet of foot, naturally gifted and he’s a southpaw. With that said, the enigmatic Englishman shot himself in the foot late last year when he was forced to relinquish the WBO middleweight title. Saunders had signed on to face Andrade but that title defense fell through when he tested positive for oxilofrine, a stimulant on VADA’s banned list but not UKAD’s (while out of competition). Saunders insists a nasal spray was responsible for the failed test but his career has taken a huge hit regardless. He returns against Shefat Isufi at 168 pounds on May 18 and a Canelo fight looks further away than ever right now.

“Zurdo” has been at world level for over three years but has yet to cash in. The WBO super middleweight titleholder has an attractive unbeaten record of 40 fights with 26 knockouts and if that’s not good enough, he’s Mexican. An all-Mexican showdown with Canelo on Sept. 14 would be an enormous event but, as is the case with some of the other fighters on this list, there are issues. Ramirez is signed with Top Rank and is therefore showcased on ESPN+. Golden Boy Promotions and Top Rank have worked together in the past to secure big events, most recently with the Jorge Linares-Vasiliy Lomachenko lightweight championship, but that fight took place before streaming networks came into prominence. Ramirez has mentioned Canelo’s name more than once, but this is a tough fight to make.

Like Ramirez, Munguia would be one part of an all-Mexican showdown. Even better, there are no political issues preventing a Canelo clash because he’s signed with Golden Boy Promotions. Better still, Munguia likes to fight face-first and Canelo would have the chance to turn a spectacular performance. Munguia, current holder of the WBO junior middleweight title, is coming off a less than stellar points win over Australia-based Irishman Dennis Hogan, but that performance might have been down to lack of motivation. A Canelo fight is as big as it gets and, at only 22 years of age, a loss would not be the end of the world. A win – however unlikely – would be career-defining and life-changing.