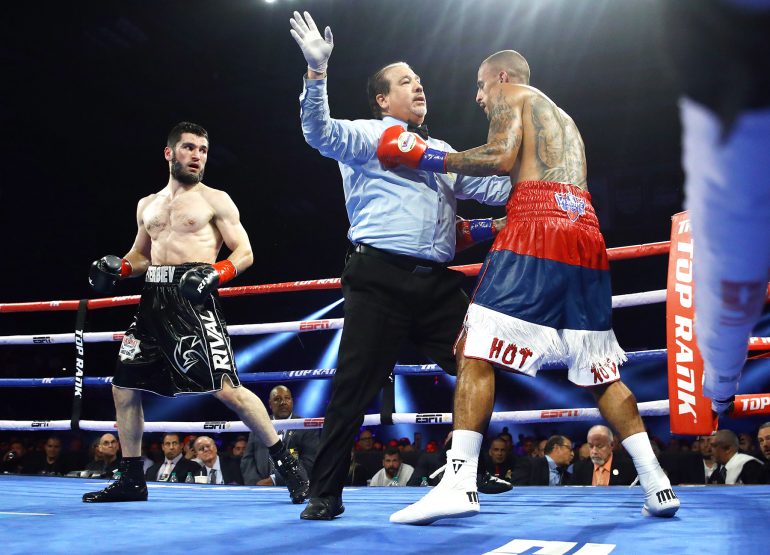 There was to be no warm-up, feel-out rounds for Artur Beterbiev and Radivoje Kalajdzic in Stockton, Calif.

The two closed the show Saturday night at the Stockton Arena with a fun brawl, with Beterbiev retaining his IBF light heavyweight title for the second time with a fifth round stoppage. Beterbiev (14-0, 14 knockouts) compelled the ref Dan Stell to waive the bout off just 13 seconds into the round after forcing “Hot Rod” Kalajdzic (24-2, 17 KOs) to the ropes and landing with both hands.

The ref stops the fight after @ABeterbiev proves to be too much for Kalajdzic. The world champ retains his belt with a TKO victory!!#BeterbievHotRod pic.twitter.com/oos50omeHq

The fight was all action from the outset with both men swinging and landing. The aggression from Beterbiev forced Kalajdzic to fight back as furiously, and he landed a few right hands and left hooks to back Beterbiev off in spots, but it was the superior power of the Montreal-based Russian that separated the two.

“I worked very hard for this fight. I went 100 percent in the gym. Maybe one day I’ll show my boxing skills,” said Beterbiev. “I want unification fights. It doesn’t matter who it is.”

The only knockdown of the fight came in the third, when Beterbiev forced Kalajdzic to momentarily touch the canvas from a left hook along the ropes.

Beating Kalajdzic makes a bit of a statement in the division, considering that the Bosnian’s lone prior defeat was a split decision loss to Marcus Browne that many felt he deserved the victory in. The 34-year-old Beterbiev won the title in 2017 against Enrico Koelling and didn’t make a defense until nearly a year later, when he stopped Callum Johnson.

After signing a deal with Top Rank, which has a platform with ESPN and ESPN+, Beterbiev would figure to have the dates needed to stay busy.

While there were two world title fights on the card, the true main event for the over-10,000 announced in attendance at the Stockton Arena was Gabriel Flores Jr., who scored his first KO in seven fights with a third round starching of Eduardo Pereira dos Reis.

The crowd cheered enthusiastically for the 19-year-old hometown hero, and cranked it up another notch when he put Reis on his back with a single left hook, ending the fight at the 1:14 mark. Flores, fighting at junior lightweight, was signed by Top Rank at age 16 and has shown to be a big local draw in Northern California before even stepping past the six-round level.