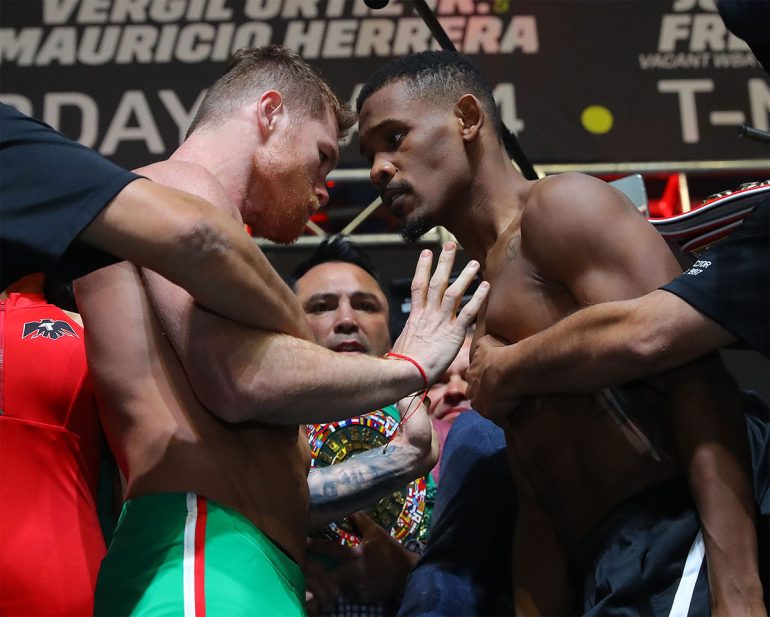 04
May
by Michael Woods

The weigh-in featured eff bombs and heightened drama, because the combatants showed their teeth and some feistiness which whetted appetites after a mellow and (overly?) polite lead-up to the middleweight unification clash.

Then, the morning of the bout continued the theme, with drama stemming from the mandated 8 am PT weigh in for Daniel Jacobs and Canelo Alvarez.

The Canelo crew had language inserted into the contract which capped the morning of weight at 170 pounds, or ten pounds over the middleweight max.

Daniel Jacobs blew the Saturday morning check. Jacobs weighed 173.6 pounds, Golden Boy Promotions CEO Oscar De La Hoya told ESPN. Contractually he was supposed to be 170. Now he faces a fine of $250k per pound but the fight is on. Canelo Alvarez was 169… https://t.co/oIMp7hKhN8

The weigh-in occurred this morning…and no word dropped about what the Mexican hitter and the Brooklyn pugilist weighed.

Silence spoke…what was going on?

Hours later, we saw that ESPN’s Dan Rafael got word that Jacobs weighed 173.6.

Jacobs was 3.6 pounds over, and he’d have to pay a fine to the other side as a result. That penalty fee was reported as $250,000 by several A side media…

… but the day before, Jacobs had told Marcos Villegas that the penalty was $100,000 a pound.

Word also dropped that ounces were being rounded up to pounds…so Jacobs would be paying the full freight on that fourth portion of a pound.

No one would go on the record from Team Canelo or Jacobs, we assume because the contract stipulated no one share with the masses specifics about the clause.

What this all means is still up for debate…If Jacobs wins, and his size and strength prove to be pillars of his success, then this gambit will be seen as a smart strategy. And if he loses, and has to pony up a fat fee, then this play will be looked upon as being perhaps too clever by half.

Regardless, Jacobs is able to eat and drink to his heart and gut’s delight, and there is no mandated weigh-in after the morning session. So Danny could be a cruiserweight, weight wise, if he so chose, when he steps to the line at T-Mobile in a few hours.

Sergio Mora will help call the bouts and this main event on DAZN. What does he think? Smart or stupid move, outside looking in, by Jacobs?

“Smart,” Mora told me hours before the scrap. “He did it on purpose.” So, smart win or lose? “Win of course, yes! Lose, a million squandered. Goes 12 rounds? Worth it.”

Another episode of this strange sport, theater of the unexpected…There will be more clarity after it gets sorted properly in that ring.