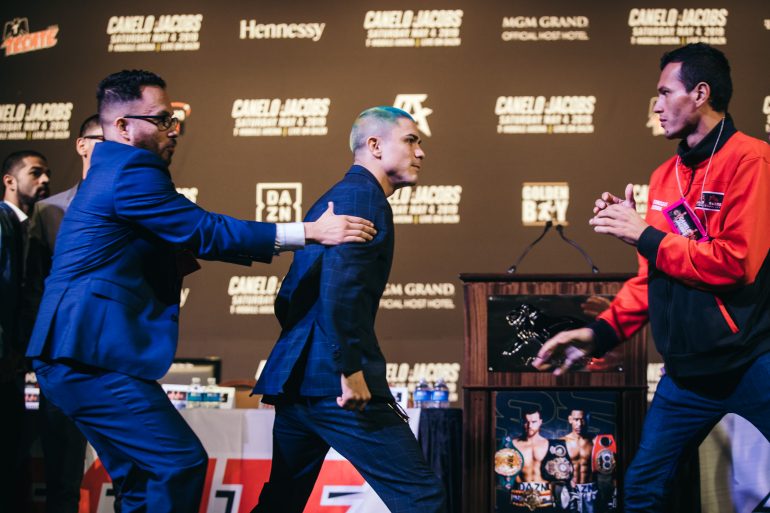 Things got heated at Thursday's press conference when Joseph Diaz and Freddy Fonseca faced off. Photo by Amanda Westcott/DAZN
03
May
by Francisco Salazar

LAS VEGAS – Joseph ‘JoJo’ Diaz has a new look and it is one where many in boxing are not used to seeing.

Bleached hair, shoving back at his opponent at Thursday’s press-conference, and a back-and-forth verbal exchange with IBF junior lightweight titleholder Tevin Farmer are just some of the things Diaz has done over the last couple of days.

The new-look Diaz has been as adamant about fighting the best as he has been frustrated that none of the world titleholders at 130 pounds are scheduled to fight him anytime soon. For now, Diaz will stay busy while an opportunity at a big-money fight or a world title shot comes.

Diaz will stay busy Saturday night when he squares off against Freddy Fonseca at the T-Mobile Arena. The 10-round bout will be part of the four-bout DAZN telecast (9 p.m. ET/ 6 p.m. PT), which will be headlined by the middleweight unification fight between Canelo Alvarez and Daniel Jacobs.

In his last bout on Feb. 9, the southpaw Diaz defeated Charles Huerta by unanimous decision in a clash of Mexican-Americans that reside in Southern California.

One of the interesting highlights that occurred this past week for Diaz occurred on Thursday before the press-conference for Saturday’s undercard began. Diaz and Farmer engaged in a heated exchange, which was carried over from Twitter weeks before, before finally being separated by security and their handlers.

Diaz also appeared with bleached hair, which included a bright array of colors.

“Everyone says I have a snow-cone head now, but it’s all good,” quipped Diaz.

Diaz (28-1, 14 knockouts), who grew up in the Los Angeles suburb of South El Monte, has also been more assertive as of late, including his exchanges with Fonseca, who resides in Nicaragua. At Thursday’s press conference, during the traditional stare-down, Fonseca placed his fist under Diaz’s chin, prompting Diaz to shove him away.

“I really feel this way. I am on a whole different level,” said Diaz, who is managed by Ralph Heredia. “Last year I had two chances to (become) world Champion, but I didn’t get it. It is my ultimate goal to be a champion and I am ready. I feel a lot stronger at this weight class. Freddy tried to flinch at me and scare me (Tuesday), but I am a beast and I will show him that. Believe that.” 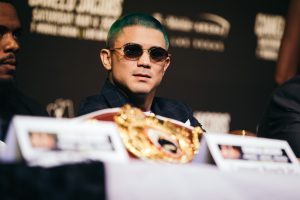 The title remained with Rojas as Diaz failed to make weight for the fight.

Fonseca (26-2-1, 17 KOs), who resides in Managua, Nicaragua, has not lost in over four years, but he has fought mediocre opposition. Fonseca might bare the frustrations Diaz has carried over the last several weeks.

“I’m going to go out there and showcase that I’m the next superstar in boxing. Freddy is going to go home sad with a couple black eyes. I’m very, very focused. I’ve been training my ass off.”

“2018, I dealt with a lot of adversity. My dream is to become a world champion, and 2018 really hurt my heart. I was really at rock bottom. Just being focused and having good family supporting me through the rough times, it really meant a lot to me, it made me more motivated, it made me more into a savage and into a beast. I’ve been training my ass off and I’m very determined to turn into a champion by the end of the year. Come May 4th, I’m going to show you that I’m the real deal.”

Diaz would like to follow through on a world title later this year. He has enlisted the help of trainer Joel Diaz and has traveled to Indio, California to receive sparring at Diaz’s gym.

There are a number of possibilities for Diaz, including Tevin Farmer or the winner of the Masayuki Ito-Jamel Herring fight for the WBO title. Fighting at 130 pounds has given Diaz a new purpose, one where he hopes will lead to a world title belt.

”I am a lot stronger. I am more confident in my abilities now than I was before. Now I am on a different level. I am on that elite level, the level with guys like Tevin Farmer. I am ready. And this guy Freddy is good but he is not on my level and I am going to prove that on Saturday. Underestimate me with this hair color, it’s cool, because I will see him Saturday and show him who I am in the ring.”