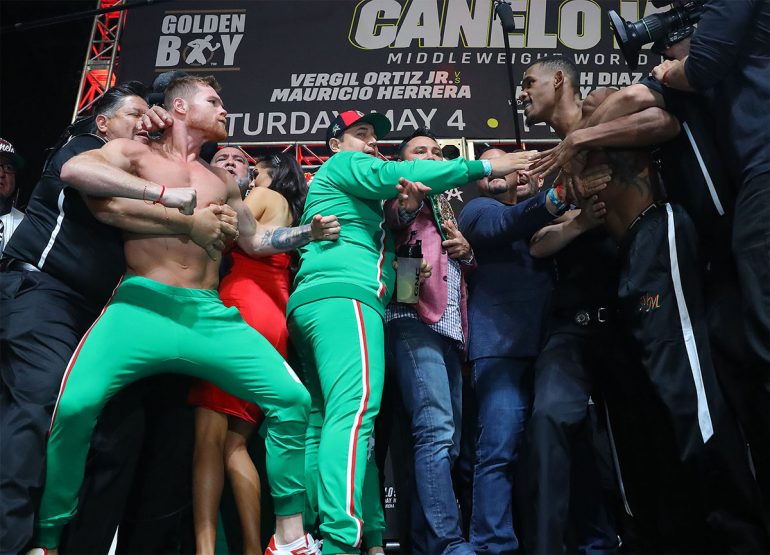 LAS VEGAS – The middleweight unification fight Canelo Alvarez and Daniel Jacobs looked like it was going to start one day early.

After making weight for their anticipated clash Saturday night at the T-Mobile Arena, Alvarez and Jacobs had to be separated after the traditional face-off following Friday’s weigh-in almost turned into a fracas between the two.

As both fighters faced off on stage before a packed T-Mobile Arena, where the weigh-in took place, both leaned their foreheads on each other for a few seconds before Alvarez shoved Jacobs, who shoved Alvarez back. Both fighters were quickly restrained and pulled away by their respective handlers.

The skirmish was surprising as both fighters have been respectful of one another in the lead-up to the fight, including Wednesday’s press conference.

“Emotions are flying high,” said Jacobs (35-2, 27 knockouts) immediately afterwards. “I’m never backing down from anybody. I do this for Brooklyn and the culture. This is the opportunity of a lifetime and that motherf**ker is getting it. I’ll talk with my fists tomorrow.”

“He’s scared,” said Alvarez (in Spanish), who resides in the boxing hotbed of Guadalajara, Mexico. “I have nothing left to say. F**k his mother.

“This unification (fight) is special to me. I have this challenge in front of me and I will succeed. I hope he tries (to come to win), but he won’t be able to do so.”

All the fighters on the rest of the DAZN telecast also made weight.

There was no pushing or shoving between Joseph ‘JoJo’ Diaz and Freddy Fonseca unlike at Thursday’s press conference. Diaz weighed in at 129.5 pounds, while Fonseca weighed 130 pounds.

Both John Ryder and Bilal Akkawy, who has been used as a sparring partner for Canelo Alvarez, weighed in at 167.5 pounds for their 10-round super middleweight clash.