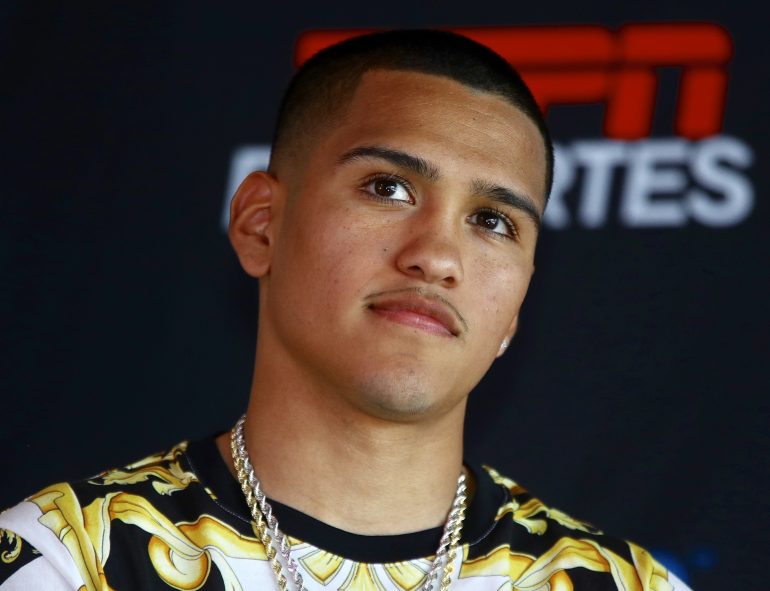 Photo by Mikey Williams/Top Rank
03
May
by Francisco Salazar

At an age when most teenagers are planning for high school prom or getting their driver’s licenses, Gabriel Flores was battling men 8 to 12 years older than him in a boxing ring.

After signing a promotional contract with Top Rank at the age of 16, Flores would embark on his pro career less than a year later at 17.

With a high school diploma from Cesar Chavez High School in his hometown of Stockton in hand last year, Flores is graduating to becoming a top draw in the city and surrounding area.

After fighting throughout Texas, Nevada, and in nearby Fresno, Flores, who turned 19 on Wednesday, will be fighting before family and friends in his hometown on Saturday. In the eyes of Flores, fighting in Fresno could not have come at a more-opportune time.

“This is such a big opportunity and I think it’s the perfect time to fight in Stockton,” Flores told The Ring over the phone earlier this week. “I’ve already had 12 fights and I’m super ready. I’ve learned a lot and gained experience over these last two years as a pro.”

With the help of Top Rank and Rick Mirigian, a sold-out crowd of about 10,000 is expected for Saturday night. Local network affiliates and radio stations have followed Flores or have given the event plenty of publicity as well.

Even Flores (12-0, 5 knockouts) has been surprised by the amount of buzz his fight has generated in the town of about 312,000 people.

“All around town, I’ve had people ask me when I would be fighting here,” said Flores, who is trained by his father Gabe, Sr. “Ever since my pro debut, people would hope that I would fight in Stockton. It’s fight after fight, but I really appreciate the support and the city has really been behind me. I couldn’t have asked for anything more.”

Flores was even given the key to the city at Thursday’s press conference.

In his last bout on Feb. 10, Flores defeated Alejandro Torres Rynn by unanimous decision in Fresno. Against the 29-year-old Pereira (23-5, 19 KOs), Flores will have a four-inch height advantage and will face a fighter who has lost two of his last three fights.

Flores may be the significant favorite and might feed off a frenzied crowd, but is not going to overlook his opponent.

“I know he like to land that right hand. He’s going to look for that punch to land. He’s going to come to fight. If he makes a mistake, I’m going to take him out. Anyone can come into a fight to beat me and get the upper hand, but I have to stay focused and do my job.”

It is early to gauge how far Flores can go in boxing, but he has made great strides as a pro after an excellent amateur career. Flores has the benefit of being promoted by Top Rank, which has the reputation of building fighters from their pro debut to becoming world titleholders.

Flores also has a passion so far for the sport. He hopes to continue to get better with each outing and understands the level of opposition will get more difficult.

For the time being, Flores is living out his dream and hopes to build off an impressive performance Saturday night before family and friends in attendance and a national audience on ESPN platforms.

“I’ve worked really hard and I have a great team. Becoming a professional boxer and fighting in my hometown has been a dream of mine since I was in elementary school. I’m blessed to fight before my hometown when there are even world champions that fight in their hometown.”

“I love boxing and everything about it. It’s kept me level-headed since I turned pro and I just want to keep doing my best and learn. I always want to keep that winning state of mind.”