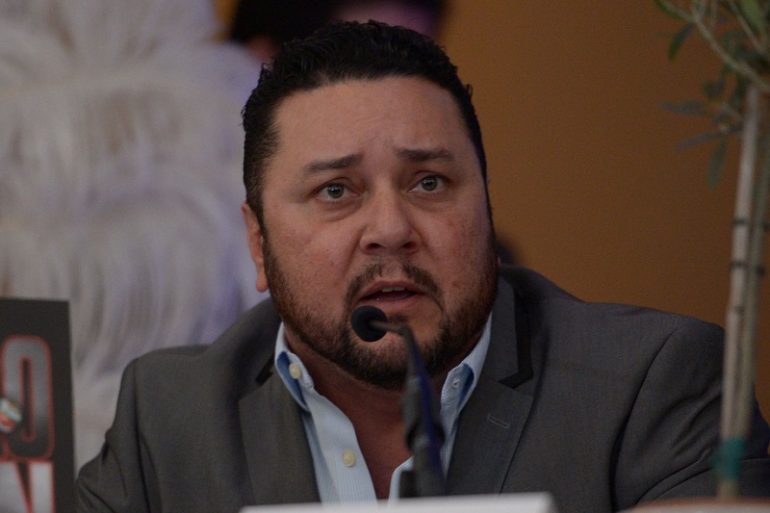 Two days away and Golden Boy Promotions President Eric Gomez is busy fielding calls. He slots me in for 10 minutes and I appreciate it because, really, he gets it from all sides. The boss, Oscar De La Hoya and all layers of the GBP infrastructure check in with him, as well as media, fighters on the card, fighters who want fights in the future, people wanting freebies…You get the drift.

It’s a fight week in Vegas, ahead of a big damned deal bout between The Ring/WBA/WBC middleweight champion Canelo Alvarez and IBF counterpart Daniel Jacobs.

I asked about this fight week, the atmosphere, the buzz…How does it compare to some other Canelo Alvarez biggies?

Join DAZN to watch Canelo vs. Jacobs on May 4

“In my opinion, I think Canelo has been carrying boxing for the last three or so years,” says Gomez. “All the big fights, against (Miguel) Cotto, (Gennady) ‘GGG’ (Golovkin), (Julio Cesar) Chavez Jr was a success; (Canelo)’s the one that’s in the top fights. Everyone else can’t make these top fights and it’s ridiculous. I say to them, let’s work together to make the best fights!

“The fans have really come out at this point. This one is the biggest thus far in the year. The media here proves it; there are so many media here. We’re excited. These ones really raise the sport and we have to continue to do these fights. Woodsy, we’re doing our part!”

I touched on that subject, noting that I think we the people need to remind the planners and promoters more often that we want and need to see the fighters facing each other in their primes.

“Exactly! When they are at the top,” Gomez concurred.

I told Gomez that I’ve seen lots of negativity, a depressive lull from media and fans. People who have been investing time and energy into boxing and they feel, in this first half of the year, they have not been getting their just rewards.

“What I see and hear, when I listen to our fans, they’ve always been very supportive. They’re very excited for Canelo. They see what he’s done over the years; the major pay-per-view events have only been him. They’re the real fights! It’s not like Canelo is trying to walk on eggshells. Take it easy: he wants to make history and make the best fights.”

And what are the stakes for this main event, pitting the shorter Mexican champ against the lankier Brooklynite Jacobs, who is seeking to win that career-definer which cements his legacy as a guy who was more than just a real good dude and real good boxer? Jacobs can lay claim to being “great” if he beats Canelo…

“In September, would we run it back if it’s a good fight; why not? We gotta get through Saturday night. It’s not gonna be an easy fight. Anything can happen; one punch can change it all! We want to put on a great event, have the fans engaged and happy. Then we sit down and talk, see who’s out there.”

Translation: Team GGG wants that third fight but we are the drivers here. We will sift options from the driver’s seat.

Readers, how do you think this plays out? What if Canelo vs. Jacobs really does lift off and we get a classic? Wouldn’t there then be a desire to see them do a sequel in September? And where would that leave GGG? Talk to me!