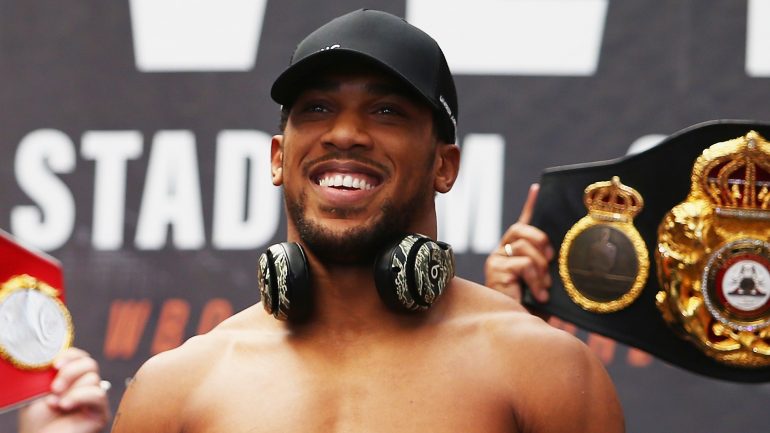 02
May
by Sporting News

SHEFFIELD, England — Sporting News sat down with unified heavyweight champion Anthony Joshua at the English Institute of Sport ahead of his June 1 fight against Andy Ruiz Jr. to discuss the recent events regarding Jarrell “Big Baby” Miller and what is to come in the heavyweight division.

Sporting News: What was your reaction when you heard the news about Jarrell Miller failing the three separate VADA anti-doping tests?

Anthony Joshua: “‘Ahh Miller why! Why!’ That was my reaction, now that we’re talking about it, it’s a mistake a massive mistake. You’re under vigorous testing, you’ve got to have good people around you because as fighters we practice our fighting and we take advice from a lot of people that are around us who are professional so it’s really important to keep good people around you and there is no room for error, especially in this sport because you’re risking your life. I can’t knock him while he’s down. Whatever he chooses to do with his life, I wish him the best and it’s a lesson I’m sure he will learn from.”

SN: In the buildup to your fight, Miller said a lot about you using PEDs and it turned out to be him all along.

AJ: “It’s interesting as when people talk about it, I think they must have used it to know the benefits of it. So maybe when they look at myself they must think, ‘When I’m doing something I don’t get like that so he must be on something.’ It must be a reaction to know where you’ve experienced it you know the outcome of it, when you look around your peers in your field you assume you must be doing something, the ones that are extending further than you are. That’s my only take on it because I would wonder why you would even mention it. I assumed that Miller was clean because I look at it from a point of view of train hard fight hard not cut out the hard work and use supplements and then fight hard. So, my mindset was that Miller was clean, he threw a hundred punches a round so I had to up my punch output, I was working hard to beat Miller not knowing that he was using performance enhancing drugs.

SN: Do you feel it’s kind of a compliment that someone would have to resort to cheating in order to gain an advantage over you?

AJ: “I think what tends to happen is you build up a false sense of confidence, so like for instance if you drink coffee every morning you feel like that gives you the confidence you need to get you through the day. In a sport like boxing it’s tough man, as a champion I’m in here fighting and sparring challengers and they give me hell all the time, so no matter how good you think you are there’s always someone that can test you. If he’s relying on this false sense of confidence that he has, he’ll become reliant on these products. I don’t know if he was using them just to defeat me, I think he thought he uses them as far as he could get to. When you come up against this level where you invest into extra anti-doping tests because we know how dangerous this sport is anyone and everyone will get found out.

MORE: Who is Anthony Ruiz Jr.? New Joshua opponent refuses to be counted out

SN: Andy Ruiz Jr. is your new opponent at Madison Square Garden — what do you know about him?

AJ: “He’s from a boxing background, his dad is an ex-boxer on the world stage as well. He’s Mexican so we all know about the Mexicans, they can fight — it’s in their heritage. I don’t think he throws as many punches as Miller but he’s more selective with his punch output. Miller kind of has a real New York, American style of setting shots up. You know roll, roll, tap, tap, uppercut and big hook. I think Ruiz punches with more intent to hurt, and when you punch with intent to hurt you punch with the intent to slow your opponent down, so they are easier to hit. Miller was going to try to outwork me, muscle me, I think Ruiz is looking for that one shot knockout.

SN: How have you adjusted in camp to prepare for the different fighting style you will be facing on June 1?

SN: You predicted an eighth-round knockout victory over Miller, now that it is Ruiz, what’s your prediction for this fight?

AJ: “Same round, it has to be a knockout. That’s what we do, we are so big and strong in this division. I didn’t knock out Joseph Parker, I did speak about going the distance to show that I can box because everyone just thinks that I’m just a bruiser, so I wanted to show my boxing ability. But in this division and at this size it’s hard not to knock someone out. When Ruiz fought Parker he went the distance as well, he didn’t get the decision but he put up a great fight against Parker, probably performed better than I did. I kept it simple behind the jab, Ruiz took the fight to Parker and in his backyard as well. So, I’m up against a tough one for sure.

SN: There’s a lot of talk that there won’t be a Joshua vs. Wilder fight until 2020. What is it going to take to get this fight signed?

AJ: “It’s a fan sport isn’t it? Wilder’s just starving the fans from an undisputed heavyweight championship fight. Wilder has smart people around him, he must know what he’s doing or be saying it to try and throw me off, who knows? He might want the fight next, but I don’t see why he would want to wait until 2020, because 2020 turns into 2021, you know what I mean? We need to get these negotiations on the way now in the background, I’ll focus on my fight, but he’s got people representing him, I’ve got people representing that can have these conversations so we can have the fight in 2019. I don’t know why he must wait so long. I can’t control the division, I think people assume that we were the ones that are dodging people, they did a great campaign to make a name off the back of our success on this side of the pond and with all that talking and hearsay, none of them have stepped up to fight. So, what can I say, talk is cheap.”

SN: Deontay Wilder takes on Dominic Breazeale on May 18 will you be watching it?

AJ: I’ll be in America at the time, it won’t mess with my body clock, so I will definitely watch it. In England I don’t really stay up late to watch the fights because I have a son and he’s up at like 7 a.m. so I can’t afford to sleep late. It will be a good fight, Breazeale is tough, a bit slower. Wilder, wild, a lot quicker and stronger so it’s going to turn out to be a good fight.

SN: Aleksandr Usyk makes the step up from cruiserweight to heavyweight and faces a former opponent of yours in Carlos Takam on May 25. Will you be keeping an eye on how Usyk performs as he is now a mandatory challenger of yours?

AJ: “100 percent, my plan if I had a crystal ball would be, myself and Wilder, I beat him to become the undisputed heavyweight champion of the world. Then I would fight Usyk because that’s like the former undisputed cruiserweight champion against the current undisputed heavyweight champion. It would be a big event. I have a lot of respect for Usyk, he’s a good fighter, he’s come from an Olympic background, represented his country, he’s from a different breed, the message we send is with our fists and in the ring. When you have people like Miller that come from the grimy gyms in New York then they have to do a lot of talking to back up their s—t, they are a different kettle of fish. So Usyk, big respect to you, good luck against Carlos Takam and welcome to the heavyweight division, the division of strength, speed, power and I wish you success.