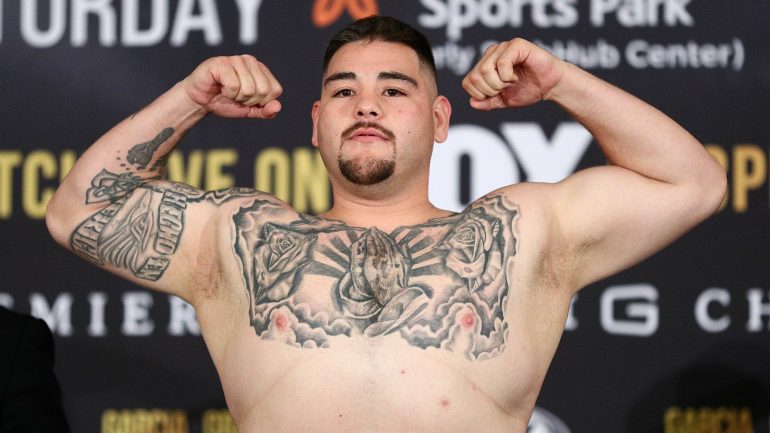 01
May
by Sporting News

Andy Ruiz Jr says he has “unfinished business” with the WBO as he prepares to take on Anthony Joshua next month at Madison Square Garden.

Ruiz was on Wednesday officially confirmed as Joshua’s opponent for the June 1 bout in New York that will see the Brit put his WBO, WBA and IBF heavyweight belts on the line.

Joshua initially was to face Jarrell “Big Baby” Miller, who was denied a license after failing drug tests, and Ruiz is desperate to make the most of his second chance to be crowned world champion.

Ruiz (32-1) lost to Joseph Parker for the vacant WBO title in December 2016, but the Californian known as “The Destroyer” feels the decision to hold that contest in his opponent’s home city of Auckland, New Zealand, meant he was not given a fair shot, while Joshua subsequently took the belt off Parker in March 2018.

“From the beginning he’s had my belt … when I fought Joseph Parker it was for the WBO title, they robbed my fight going over there to his home town so technically AJ has my belt,” Ruiz said, via a video released by Matchroom.

“I’m excited to claim what’s mine, this is my chance and I’ll do whatever I can to win and take that belt back to Mexico and the United States.

“I’ve got unfinished business with the WBO title because that was my first loss, I felt that they stole my fight. … That was my chance to become the first Mexican heavyweight champion of the world and they took it away, so this time I’m gonna let everything go and get what’s mine.

“He’s the best one out there, he has all the belts besides the WBC, but I’m here to take what’s mine and I’m here to pull out the upset. I’ve got to be focused, stay calm … it’s time to make history.”

Ruiz feels an upset win would help him achieve his dream of being considered alongside some of the great heavyweights of the past.

“I want to be like [Mike] Tyson, [Evander] Holyfield, Lennox Lewis, I want to be in that category and this is my chance and I just can’t wait,” he said. “I’m going to throw combinations like I’ve never done before. A lot of people underestimate me and I’m used to that my whole life, but I’m not going in there scared or nervous.

“[Joshua] fights like a big robot, but with my style and speed he’s not fought anyone like me so it’s going to be a whole different ball game. I don’t think he’s good going back so I’m going to bring the pressure to him.”