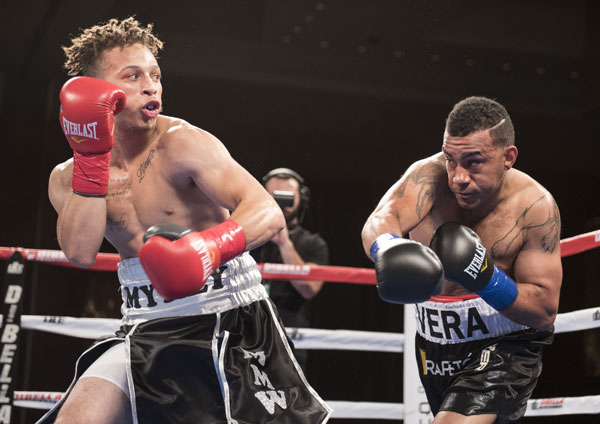 Mykquan Williams will look to run his record to 15-0 when he faces Rickey Edwards on May 17 at the Foxwoods Resort in Mashantucket, Conn. in the main event of Broadway Boxing.

Edwards (12-2, 3 KOs) of Paterson, NJ had won his first 11 fights before suffering back to back defeats in six rounders. The 28-year-old Edwards was in action last in December, outpointing William Gonzalez for a decision win.

The biggest name on the card is the returning Marco Huck (41-5-1, 28 KOs), a long-time cruiserweight titleholder who is scheduled for his second start as a heavyweight. The German resident hasn’t fought in the U.S. since 2015, when he was knocked out in 11 rounds by Krzysztof Glowacki in a thriller. His opponent hasn’t yet been named.

The rest of the card features other prospects from around the New England and New York region.

Toka Kahn Clary (25-2, 17 KOs) of Providence, R.I. returns to the ring for the first time since his loss in a featherweight title eliminator against Kid Galahad, facing an opponent to be named; Irvin Gonzalez Jr. (12-0, 9 KOs) of Worcester, Mass. will face Elijah Pierce (8-1, 7 KOs) of Oklahoma City, Okla. in an eight-round featherweight fight; junior welterweight Adrian Sosa (10-0, 8 KOs) of Lawrence, Mass. will face an opponent to be named in a six-rounder; heavyweight George Arias (13-0, 7 KOs) faces Keith Barr (19-11-1, 8 KOs) of Glenville, W.V.; junior welterweight Anthony Marsella Jr. (12-0, 6 KOs) of Providence, R.I., who is a cousin of former world champ Vinny Pazienza, faces an opponent to be named in a six-rounder.

The card will be streamed live on UFC Fight Pass beginning at 8:30 pm.