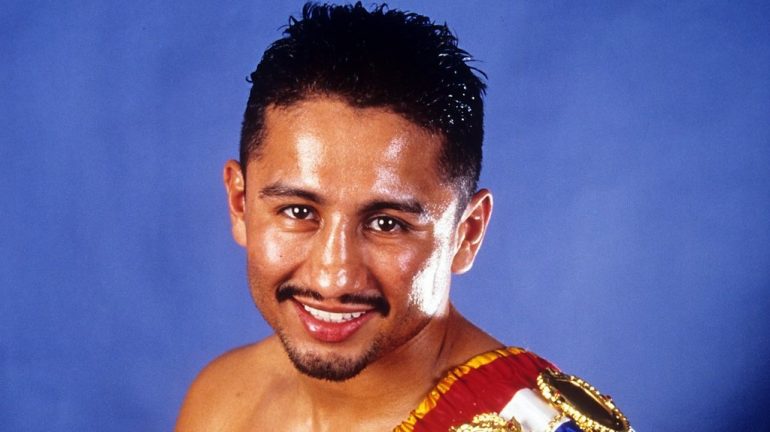 Photo from The Ring Archive
30
Apr
by Anson Wainwright

Paulie Ayala was a hard-working fighter who won the WBA bantamweight title in the late 1990s and fought some of the very best fighters of his era.

Ayala was born in Fort Worth, Texas on April 22, 1970. His father was a Vietnam veteran and a hard taskmaster. That tough love approach would later help Ayala succeed in his boxing career.

“They didn’t have all the therapy these soldiers do now,” the former champ told The Ring. “The therapy back then was to go back and try to lead a normal life. Me and my brother were the therapy; we lived the boot camp for a long time so that was tough. I grew up with a fighting mentality.”

In August 1998, Ayala, now the WBC’s mandatory challenger, met popular champion Joichiro Tatsuyoshi in Japan. The challenger was marginally behind on the scorecards when the bout was stopped at the end of the sixth due to a cut over the Japanese fighter’s right eye. He lost via technical decision.

Disappointed, Ayala returned home and regrouped with two wins before meeting the unbeaten Johnny Tapia for the WBA title in June 1999.

The 6-1 underdog was determined to make the most of his second opportunity. Ayala kept his cool when the volatile Tapia come across the ring during the introductions and pushed him, an infringement which caused a minor skirmish between the camps.

It was a close fight and both men had their moments, but at the end of 12 rounds Ayala was awarded a hard fought majority decision. The contest was later named The Ring Fight of the Year. 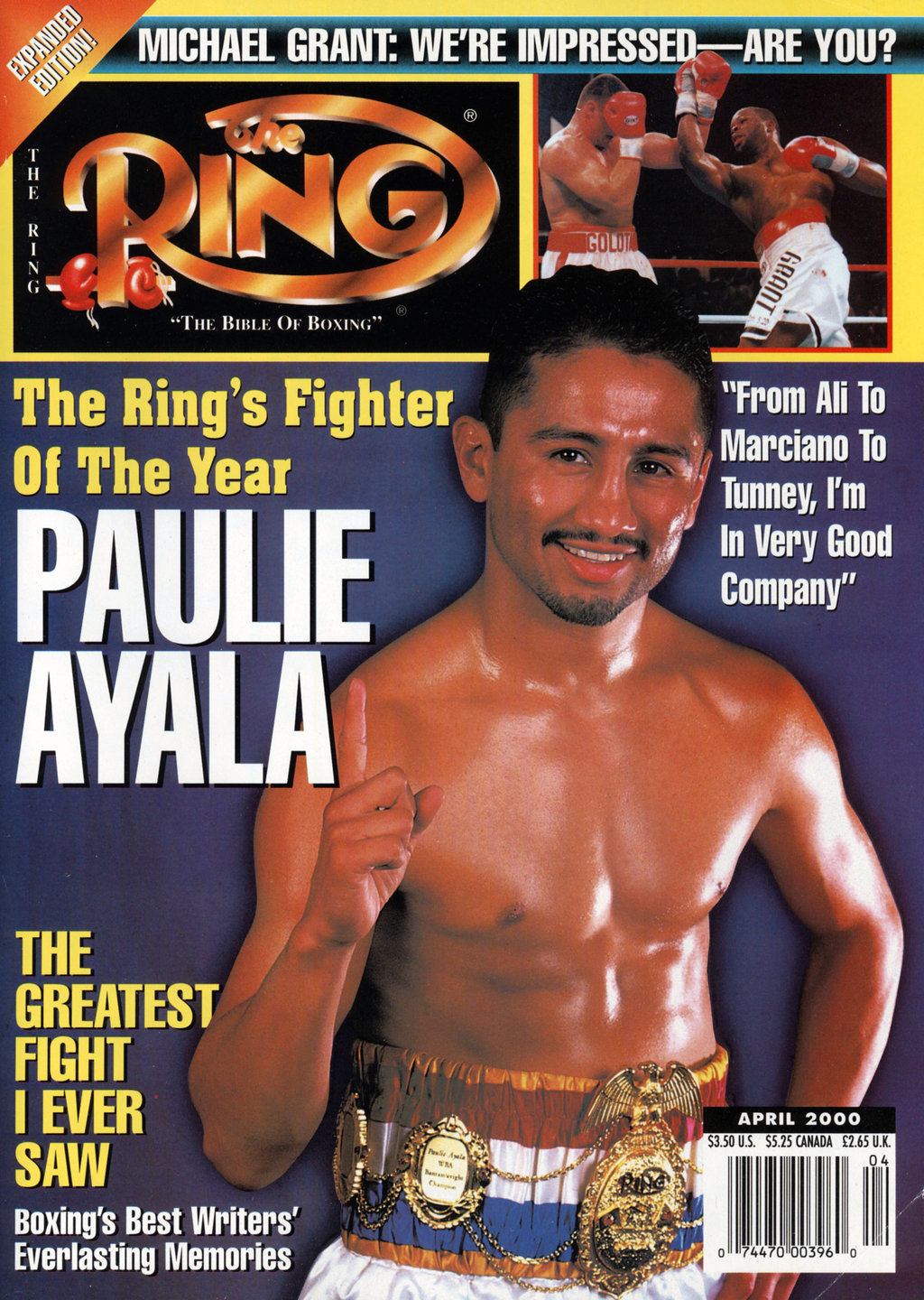 “I got my karma when I fought Tapia,” he said excitedly. “Oh man, it’s the greatest feeling in the world. To have the opportunity against a more recognized fighter in the States was unbelievable.”

He returned home and Fort Worth threw a parade to celebrate his win, evoking memories from his childhood.

“When I was growing up there were five world champions simultaneously from Fort Worth,” he said. “They were fighting out of the same gym: Bruce Curry, Donald Curry, Steve Cruz, Gene Hatcher and Troy Dorsey. I trained on the amateur team.

“When Steve Cruz beat Barry McGuigan in 1986, I had just won my junior Olympic nationals that same weekend. Fort Worth had a huge parade and (Cruz) offered me to ride in the parade and I was super-excited. So when I won my title, I did the same thing. I had all the amateurs ride with me.”

Ayala outworked rugged Thai Saohin Srithai Condo in front of 7,000 fans in a hometown defense and was received The Ring Fighter of the Year award. He then edged past Johnny Bredahl and repeated his win over Tapia.

“I think I won both unanimously,” said Ayala. “First one I had to go after him because he was champion, the second one, I didn’t fight that same fight because I was champion. To me, he was hesitant of coming at me. He was expecting me to do the same thing and I beat him a whole different way. I thought I had his number; my style was made to give him problems.”

With nothing else to achieve at 118 pounds, Ayala stepped up to junior featherweight and met Bones Adams. The two engaged in an underrated classic and Ayala won a razor-thin split decision.

“I was ready for whatever he had,” said the ex-champion. “I was able to read his shots and was blocking and countering.

“They said he landed more shots but I said, ‘I don’t know how invincible y’all think I am, but if he landed those shots, I’m still standing here.’ I have a picture of before and after the fight and the picture says a thousand words. I landed the harder shots.”

Adams was given a rematch six months later and this time he lost a wide unanimous decision.

Ayala rounded out his excellent career at featherweight against two Mexican greats. He dropped a unanimous decision to Erik Morales and was stopped for the only time in his career by Marco Antonio Barrera in June 2004.

“Even though I didn’t have (a lot of) knockouts I had to gain respect from these guys,” said Ayala (35-3, 12 knockouts). “If I couldn’t get their respect they would have jumped on me.”

Ayala, now 49, has been married to wife Leti for 27 years. The couple live in Fort Worth and have two children. He has run Paulie Ayala’s University of Hard Knocks since 2004. There are various programs; one for under risk children and another for people with Parkinson’s disease.

The former champ graciously took time to speak to The Ring about the best he fought in 10 key categories.

BEST JAB
ERIK MORALES:
Morales and Barrera had excellent jabs; sometimes I couldn’t avoid them. They could both slug and box. I’m going to go with Morales. He threw a hard stiff jab, even if it was a check jab or solo jab, jab to the body, he knew how to use his leverage well and he threw from different angles. He showed a lot of consistent variations with his jab.

BEST DEFENSE
MARCO ANTONIO BARRERA:
He knew how to slip well and he knew how to catch well. Sometimes when you would assume you caught him he would turn his cheek as you were landing so it was hard to land a solid shot unless you timed it when he was throwing. For the most part, when he’s on defense it made it difficult to land flush shots.

FASTEST HANDS
JOHNNY TAPIA: I would give that to Tapia. He threw a lot of straight combos. I’m not saying they were landing, but he would throw an array of combos consistently. He was pretty quick.

BEST FOOTWORK
TAPIA: Tapia came up with some pretty good footwork. When we fought his game plan was to stick and move and box. That was giving me a lot of problems. With his emotions, he got caught up in the fight a little more and that’s what caused him to stop moving as much.

BEST CHIN
TAPIA: Barrera, Morales and Tapia – they all had great chins. Let’s put Johnny; he was moving up from 115, then 118, coming from a lower weight class. He had a great chin. I hit him more consistently than Morales or Barrera.

SMARTEST
BARRERA: I got caught by Barrera to the body – he fractured my rib – and was taking his time to do it again. I fought the wrong game plan. I was trying to do too much boxing. I was showing too much respect and not attacking and fighting the way I normally do. I was trying to play chess with a master.

STRONGEST
SAOHIN SRITHAI CONDO: Strength-wise, he was pretty strong. He was a former champion in Muay Thai. Physically, when I tried to move him around, he was more resistant than the other guys.

BEST PUNCHER
MORALES: He hit me more than I ever have been hit in a fight, including the Barrera fight. In the second round he caught me with an uppercut and it swelled my eye shut, so I wasn’t able to see his right hand for at least 10 rounds of the fight. Barrera caught me to the body, he fractured my rib and it was hard to breath. Morales was heavy-handed, even when you would block I could feel he had power.

BEST BOXING SKILLS
BARRERA: He outboxed me and was able to checkmate with the body shot.

BEST OVERALL
MORALES: I would say the best fighter was Morales. He could box, he could slug, but as a warrior, he wanted knockouts and would go for it. He wouldn’t beat about the bush. He knew how to dodge, block, counter, he came from all different angles.