Looking back on Canelo Alvarez’s first pro fight, the debut of a future world champion 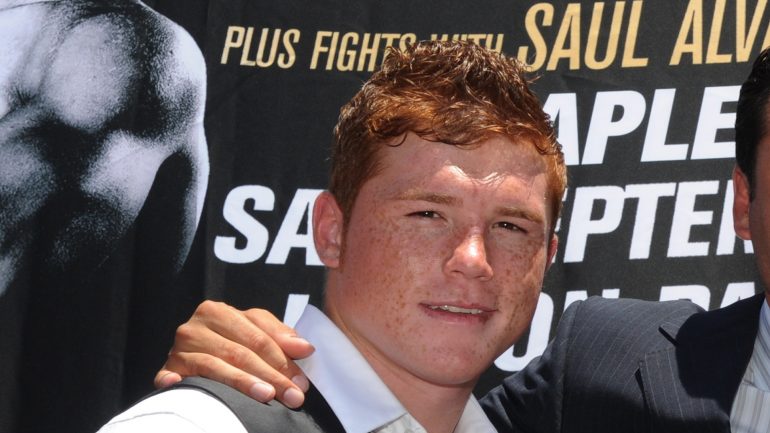 Everyone has to start somewhere.

For Saul “Canelo” Alvarez, his professional career began at the Arena Cholo Larios in Tonala, Mexico, close to his hometown of Guadalajara, way back in October 2005.

Startling as it may sound, Alvarez was just 15 years old at the time, with a face full of freckles and his infamous red hair, but having already earned accolades as the Junior Mexican National Boxing champion earlier that same year.

Alvarez’s first pro opponent was a Mexican fighter by the name of Abraham Gonzalez, an 18-year-old who entered the ring that day with an 0-1 record.

When Sporting News reached out to Golden Boy Promotions to learn more about Gonzalez, we received a statement from their public relations team saying: “We don’t know anything about Canelo’s first opponent.”

What we do know is the fight was scheduled as a four-round junior welterweight bout and thanks to the expansive powers of the internet, there’s footage — albeit, grainy as if it was taken on a camcorder — as proof.

“Ca-nelo! Ca-nelo!” chants filled what appeared to be a small, cramped arena as a precursor for the identical shouts that he hears today, as Alvarez, in baggy white trunks, pumped a light jab to gauge distance, before circling around Gonzalez, who was donning black, in the fourth round.

Just then, Canelo unleashed a vicious overhand left, following it up with a stiff right hook, which rocked Gonzalez and made his head swivel. Another powerful left-right combination followed, as Alvarez set the tone for the all-action fighter that he’d become through the years.

Gonzalez seemingly ate a lot of the punches and tried throwing shots of his own, but one could see the damage being done, as the younger Canelo was clearly levels ahead of his older opponent.

Feeling Canelo’s power, Gonzalez tried to body up to and smother the future world champion in attempt to make it an uglier fight on the inside, but Alvarez evaded the heavy artillery aimed his way and responded with power blows of his own.

Operating with his back against the ropes, Canelo showed excellent head movement in ducking and slipping incoming punches, before blasting Gonzalez with a scintillating left-right hook combination that landed flush on the chin. He sat on a left hook next, rocking Gonzalez and sending him wobbling back.

MORE: Join DAZN and watch Canelo vs. Jacobs on May 4

Relentless, the young lion delivered five consecutive rights, prompting Gonzalez to grab Canelo’s waist. When the referee stepped in to break up the clinch, Canelo landed three, unanswered right hooks to the head, before the ref stopped the fight, giving the 15-year-old Alvarez a fourth-round TKO in his pro debut.

Just like that, the professional career of Saul “Canelo” Alvarez was launched with a bang.

As he continued his ascension up boxing’s ranks, Canelo would grow to become a boxing star attraction and face the likes of Shane Mosley, Floyd Mayweather Jr. (Alvarez’s only loss), Miguel Cotto, Amir Khan and most notoriously “GGG” in marquee venues such as the MGM Grand Garden Arena, Mandalay Bay and the T-Mobile Arena.

But it all started in humble Arena Cholo Larios in Tonala, Mexico against Abraham Gonzalez nearly 14 years ago.