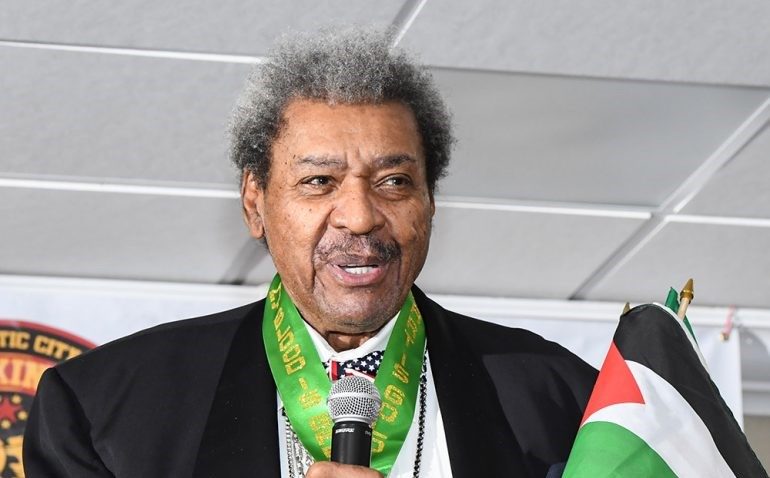 He has a signature phrase, “Only in America,” which is in the top three in the boxing realm, with Michael Buffer’s and Shannon Briggs’.

But Don King is the only one of them who is a legit icon… someone who will be mulled decades after he goes. And no, he hasn’t gone. Yes, he is now at the stage where they are putting him in halls of fame, but he is still a promoter at heart, and although part-time, he can still talk a great game.

He did at the NY State Boxing Hall of Fame induction gala on Sunday, April 27 at the Russo’s On the Bay function hall in Howards Beach, Queens.

OK, maybe he was a bit like one of those champs a decade or two past their prime who goes to the gym and whacks that heavy bag with authority and surprising hand speed for one so gray. The flashes, they remind you of what once was.

King batted cleanup at the induction ceremony; had the last speaking slot after Monte Barrett, and Arthur Mercante Jr. and the rest of the honorees. I will have to play back the tape to get many of the references he made. There was talk of Jesus, more than I’d heard before, and that led me to talk to the Donfather as he was signing autographs and prepping to go to the airport for a flight back to Florida.

He’d spent 18-plus minutes talking about his time doing business in NYC, back when him and Arum were titans of the industry who crossed swords all the time, and Don’s henchmen, err, brothers in arms, Paddy Flood and Al Braverman helped him control his territory. “Black and a Jew and an Irishman,” said King, as he fiddled with his omnipresent flags, which he switches in and out according to the occasion.

“Don, have you been born again?” I asked as he signed autographs and told widows how great their hubbies had been.

“So, there’s been no recent re-conversion then?”

He filibustered, and I gained from that flurry that no, no recent “Come to Jesus” moment had him epiphanized. Heavy on his mind now is the worry that we could all be obliterated in a nuclear Armageddon. All these bigwigs with egos and tempers and beefs… the Trumps and the Kims and such… King positioned himself as a mediator, along the lines of what Jimmy Carter tried to do in the late 70s. “I’m a Republicat,” he told me, eschewing the GOP or Dem label, although we both recalled he’d been rallying on behalf of Trump leading up to the 2016 faceoff.

“My name is Jimmy Carter, and I’ll never tell a lie,” said the Plains, Georgia Dem nominee in 1976, and I tried my best peanut farmer impression. King cracked a smile, almost did one of his mini-booming laughs. “You trying to transition into being Jimmy Carter,” I asked. Nah, he said, still some boxing work to do… although, he re-stated, we all have to keep an eye on all those nukes and these strong-men leaders who could be tempted into hitting the button.

So, apparently King is part-time in boxing because he’s also working behind the scenes to bring placidity to the planet. Front and center, the promoter got to work and, in his induction talk, said that he wanted his heavyweight Trevor Bryan to get the Jarrell Miller slot at Madison Square Garden and battle Anthony Joshua. He addressed promoter Eddie Hearn, who is sifting through names: “Eddie Hearn, I love your daddy, I got a great relationship with your father. Let me help you, don’t try to be young, and independent. We need each other. I can help you! I’m promoting this fight right now. It’s also a disaster what he’s doing to his champion. If that champion don’t fight a good guy at Madison Square Garden, that’s gonna diminish him, all the way down the line. It ain’t gonna be like I’m trying to hustle and get some money, give the man, he deserves it, he’s earned the opportunity. Trevor Bryan, 20-0, 14 KOs, champion of the world the WBA interim champion, it’s champion against champion.”

You want to parse that declaration out? Nah? Me neither. I mean, here’s Bryan’s Boxrec, have at it. Me, I decided before I attended the gala that I’d soak up King and the persona and the opportunity to see him do the schtick, excuse me, do his thing live and in person. I heard him say, “Jesus Christ is my life,” and saw the puzzlement in the eyes of the attendees. Such a complex figure and really, his catchphrase does sum him up quite well, nails him in fact: “Only in America.” The Don King story, the narrative from birth till now, for better, and worse, it’s up to you to decide when you put pros and cons on the scale. I’m pro for the ex-con.

Listen to the Everlast “Talkbox” podcast with host Woods here. Showtime executive Stephen Espinoza is the A side guest this episode.