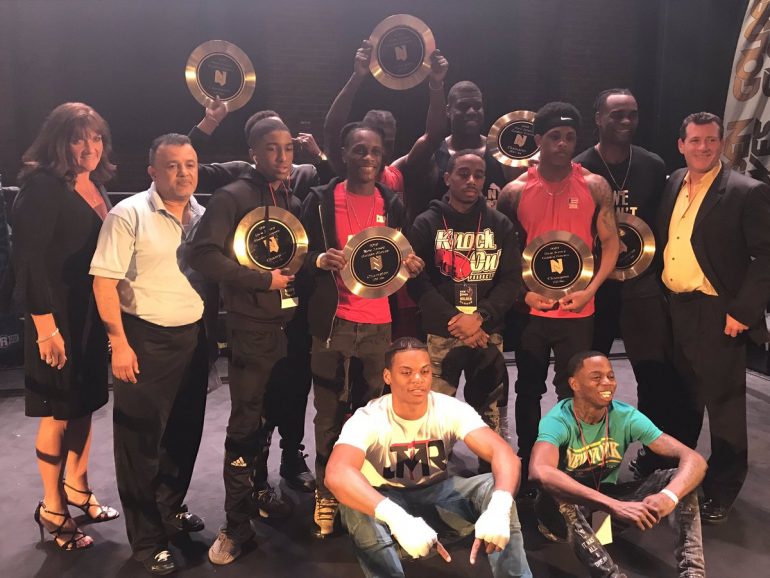 ­RAHWAY, N.J. – Gathered at center ring, with each holding their Golden Gloves championship plate, they counted down before shouting out the state they represent: “Jersey!”

Their timing was off, but the message was clear. Though they’d traveled individual roads to get to the Union County Performing Arts Center on Saturday for the state championships, they were now a team. They’ll travel together to the National Golden Gloves – which takes place May 6-11 in Chattanooga, Tennessee – wearing matching team uniforms, and they’ll even attend each other’s weigh-ins. They all share a single goal: to bring their state bragging rights on the national stage.

“It’s gonna be rough,” said Jose Rosario, the NJ Golden Gloves director, himself a national champ in 1982. “But we’re gonna have a good chance because most of the top boxers in the country, I don’t think they’re gonna go into the National Golden Gloves because they’re getting ready for the [Olympic] trials.”

The team’s lone champion last year, Raymond Ford, has already turned pro and is 1-0 after signing with Matchroom Boxing. The NJ team will enter Chattanooga with a mix of veterans and young talent rising up from the junior olympic ranks, like Rajon Chance, a veteran of over 100 fights in the JO ranks who succeeded Ford as 123-pound open champ in a walkover.

Of the five defending their titles, four of them retained, with the sole exception being Andrew Tanchyk (Steve Rivera BC), last year’s 178-open champion who was dethroned by Vladmir Dalton (Strap City BC) in decisive fashion. Dalton scored standing eight counts in each of the first two rounds before the referee stopped the fight at the 51 second mark of the third.

Among the incumbents, Jamar Talley, the reigning 201-pound open champion, did the best at last year’s nationals, making it to the semifinals in Omaha. Talley, who is 19 and stands 6’2”, defeated the shorter Darron Baity by second round stoppage at the 1:30 mark.

Jamar Tally (Camden BC) stops Darron Baity (Brunswick BC) at 1:30 of round two to repeat as NJ Golden Gloves 201-pound champ #GoldenGloves pic.twitter.com/xJ68gA19y5

The unattached Saleem Kelly won his fourth straight open title in the 152-pound division, outpointing Jamar Cope. Kelly, 21, of Red Bank built tempo as the bout progressed. forcing Cope to the ropes and landing hard shots to the body and head. Cope lost a point in the third for holding, but it was all he could do to slow down Kelly.

“My problem is I got a pro style,” said Kelly pointing out what has held him back at nationals. “I start off slow, I start picking it up as the rounds go on.

Kelly is rated no. 7 in the country and believes that, having identified his biggest weakness, he’ll succeed at the national level. Kelly intends to turn professional next year if he doesn’t make it to the 2020 Olympics, but is also studying business at Brookdale Community College to prepare for a life after boxing.

“I love the sport but I don’t wanna do it for the rest of my life because of the punishment that comes with it. When I start making big money I want to invest my money into real estate, I want to buy up properties. I want to use that money to make another life for myself,” said Kelly.

Kelly has lots in common with Derek Starling, the 29-year-old who also won his fourth straight open title in the 201+ division with a decision over Aziz Wright. Starling started boxing at age 12 but played basketball at Brookdale a decade ago as a 6’5” center. He got back into boxing after college thanks to Gleason’s Gym Jersey Shore, which is near his house in Long Branch.

Starling used his height and southpaw jab to keep the haymaker-throwing Wright at a distance, and had cut down to 255 pounds from previous highs of 275-280 to become more mobile.

“It always feels special to win this but this is only half of it. Now I gotta go and win nationals, that’s my main goal,” said Starling, who says he’ll turn pro after the tournament. 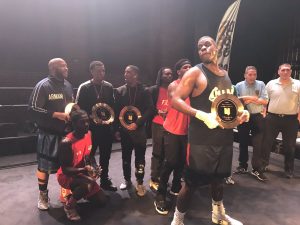 Derek Starling has some fun with his NJ Golden Gloves teammates. Photo by Ryan Songalia

The other incumbent to retain his title was Bernard Gardner (Bayonne PAL), who had a serious challenge against Kasim Cuffie before winning a decision.

Other winners include John Vallejo over Omar Coubatti in the 141-pound open final between two boxers out of True Warriors Boxing Club and Justin Penaranda (Ike & Randy BC) over Troy Pasha (DORCA BC) in the 132-pound open division. Winning in a walkover were Anthony Johns (108 open) and Amir Warren (114 open), while Daybon Cowans of Aspira BC was named best boxer of the tournament after winning the 152-pound subnovice title.

New Jersey has won 13 National Golden Gloves titles since 1958. The ten boxer team leaves early next Sunday morning for a chance at adding some more.