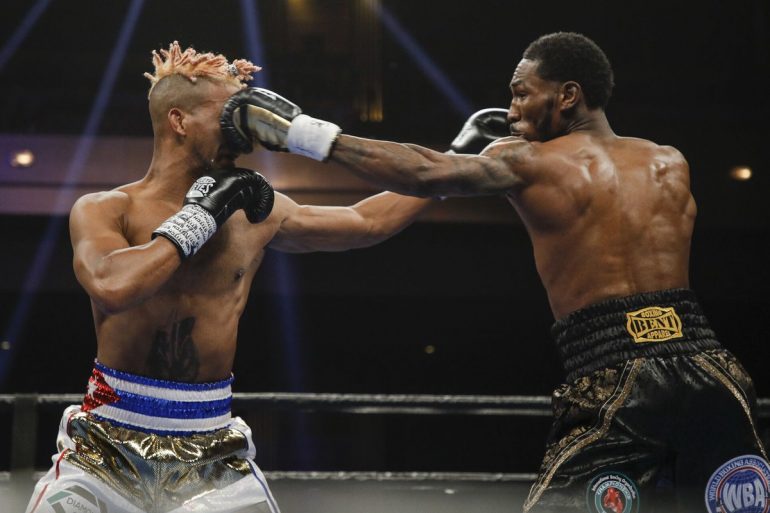 Easter (right) and Barthelemy fight to a draw.
27
Apr
by Francisco Salazar

A secondary world title belt that was on the line remains vacant.

Easter (21–1-1, 14 knockouts), who resides in Toledo, Ohio, had not fought since losing by unanimous decision to Mikey Garcia on July 28 in Los Angeles, losing the IBF lightweight title in the process.

Barthelemy, a former two-division world titleholder, went up to 140 pounds to challenge for the vacant WBA world title belt, but lost to Kiryl Relikh by unanimous decision on March 10 of last year.

Both fighters did little to engage during the first half of the fight. Each fighter waited to counter, but it was Barthelemy (27-1-1, 14 KOs) who took initiative up during the middle rounds, throwing and landing lead or counter left crosses to the head.

Easter let his hands to open the seventh round. The action brought the crowd alive inside the ballroom, but Easter did not follow up or throw anything like that for the rest of the fight.

Both fighters stood in the pocket during the last three rounds, but Barthelemy and Easter never let their hands go. Easter displayed more ring generalship as Barthelemy fought in spurts.

“I thought it was close, but I thought I did well in the end,” said Easter, who is trained by his father Robert, Sr. after working with Kevin Cunningham in his last fight. “I applied the pressure. Barthlemty is a crafty fighter, but he didn’t want to face my power. I was in shape. The layoff didn’t bother me.”

Barthelemy offered a different point of the view of the fight.

“I thought I won the fight,” said Easter, who is originally from Cuba and now resides in Las Vegas. “We were waiting for a different Robert Easter, but he never showed up. Robert Easter comes forward and attacks, but he didn’t do it in this fight.”

“This was a lost opportunity. I want a rematch as soon as possible.”

Easter also agreed on an immediate rematch against Barthelemy.

Mimoune’s awkward style befuddled Postol during the opening round, but Postol boxed effectively from distance throughout the rest of the fight. Anytime the southpaw Mimoune pressed forward, Postol countered with lefts and rights to the head.

“The opponent was awkward, but I was glad to be back in the ring,” said Postol, who is managed by Vadim Kornilov. “I would like to fight Jose Ramirez for the WBC title. Does he want to fight me though?”

In the opening bout of the Showtime telecast, heavyweight prospect Efe Ajagba stopped Michael Wallisch in the second round.

Ajagba’s longer reach allowed him to connect from distance over the slower and more-methodical Wallisch, who resides in Munich, Germany.

A right cross from Ajagba dropped Wallisch about a minute into round two. As Wallisch was not one knee, Ajagba landed a right hand to the head, prompting referee Tony Weeks to call time, giving Wallisch time to recover.

After action resumed, Ajagba battered Wallisch with several combinations. Wallisch backed up against the ropes from the impact of the punches, and when he did not throw punches back at Ajagba, referee Weeks stepped in to the bout at 1:40.