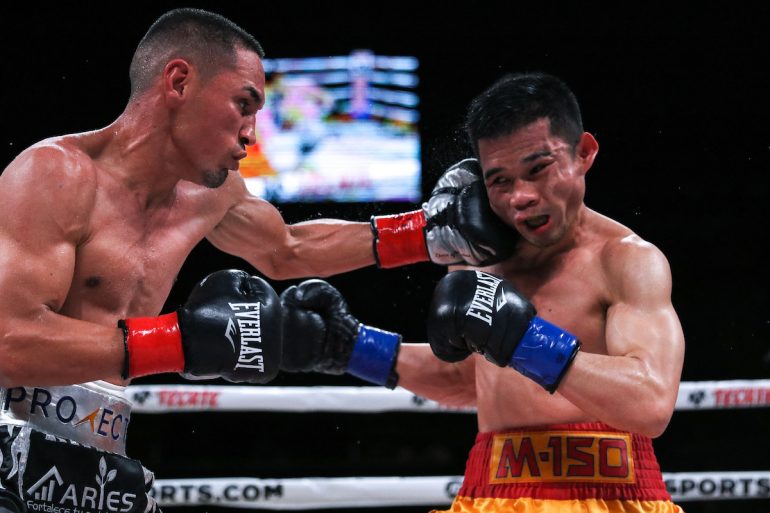 INGLEWOOD, California – The junior bantamweight division is probably never going to host the star attraction that Johnny Tapia could have been had he remained there in the 1990s or that many had hoped Roman Gonzalez could be a few years ago, but the 115-pound weight class can still be home for entertaining, high caliber championship bouts.

Srisaket Sor Rungvisai and Juan Francisco Estrada put on another hotly contested 12-round battle in their anticipated rematch on Saturday at The Forum, the site of their fight-of-the-year candidate first bout last February, which the Thai powerhouse won by majority decision.

This time it was the former unified flyweight titleholder from Mexico who had his hand raised to the delight of the pro-Estrada crowd inside the famous arena. Estrada won by scores of 116-112 and 115-113 (twice).

“I needed to show the Mexican fans and everyone here tonight that I was going to win that belt,” said the 29-year-old Sonora native. “Thank you for all of the people in Mexico and here tonight for supporting me.”

Estrada (39-3, 26 knockouts) gave his fans something to cheer for, perhaps delivering the finest performance of a 10½-year career full of highlights and achievements, including a bold stand against a prime version of Gonzalez in 2012, winning two world 112-pound titles by beating Brian Viloria, and a narrow unanimous decision over former beltholder Carlos Cuadras, the last man to defeat Sor Rungvisai (in 2014).

Estrada, who lost the first fight against Sor Rungvisai by competitive (some believe controversial) majority decision, made the necessary adjustments to improve on that performance. Last year he boxed cautiously during the middle rounds, which cost the fight. This time Estrada boxed a more daring and aggressive fight from the opening bell, almost daring the defending Ring Magazine and WBC champ to exchange with him.

On the other hand, Rungvisai (47-5-1, 41 KOs), who carried a 20-bout win streak going into the Matchroom Boxing USA main event, made a most baffling “adjustment” by fighting most of the bout from the right-handed stance. Why a career southpaw known for his monster straight left and killer right hook would decide to fight orthodox is anybody’s guess.

In 2017, the Thai tank outpointed Gonzalez for the WBC belt in a thrilling upset and then annihilated “Chocolatito” in their rematch. Sor Rungvisai won the vacant Ring championship by outpointing Estrada in a bout where he exhibited some boxing nuance along with his usual pressure and power punching. 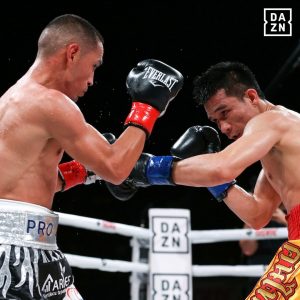 But while trying to box right-handed in the rematch he was effortlessly outmaneuvered and outworked by Estrada over the first five rounds of the fight, which was broadcast live on DAZN in the U.S.

Estrada worked fluid combinations and choice body shots off a sharp jab, although the awkwardly orthodox puncher had moments in Rounds 2 and 6 when he landed hard right hands.

“He surprised me a bit by (boxing from an orthodox stance) because he is always lefty,” said Estrada, who continued to outclass Sor Rungvisai in Rounds 7, 8 and 9. “It surprised me that he was righty tonight. But I felt him out well when he fought right handed.”

Finally, in Round 10, Sor Rungvisai returned to the southpaw stance and appeared to win it with renewed effective aggression. A debilitating low blow in Round 11 put Estrada down and seemed to sap some wind from the Mexican’s sails. The Thai hero then teed off on Estrada with a series big left hands, which set up a final round that was almost as riveting as Round 12 of their first bout.

So, basically, Sor Rungvisai pulled the same mistake Marvelous Marvin Hagler made vs. Sugar Ray Leonard for nine rounds, than then in the championship rounds he almost pulled the famous sneak move Rocky Balboa made in the final round against Apollo Creed in the first movie.

In other words, it was dramatic stuff.

And there’s more to come.

Gonzalez arrived to the 115-pound division too late. By the time he won his fourth world title in a fourth weight class, he was well past his prime years. Whatever he had left was beat out of him by Sor Rungvisai.

There’s no shortage of quality matchups, including a rubber match, but Estrada is looking for new blood.

“If he wants a third fight, I will give it to him,” he said, “but I would prefer to fight some other champion first. That’s what I think is next.”