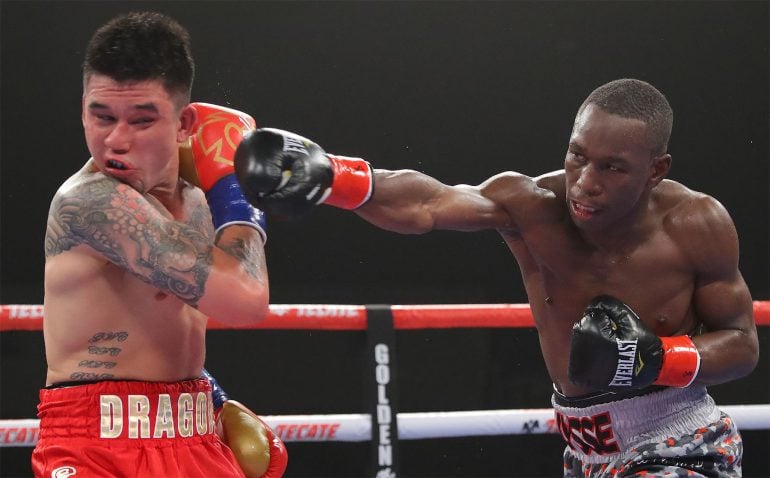 The fight was a rematch of their October 2017 clash in Ulysse’s hometown of Montreal, which Claggett won by split-decision. Claggett vowed before the rematch that he was going to defeat Ulysse by knockout.

Claggett boxed effectively during the opening two rounds, but was momentarily stunned towards the end of the third round by an Ulysse right hand to the head.

Both fighters scored effectively in the pocket during several exchanges, but Ulysse connected with several punches that snapped the head of Claggett, who was not visibly hurt by the punches.

Ulysse, who recently signed a co-promotional deal with Golden Boy Promotions, was the more effective during the final two rounds of the fight, mixing his attack to the head and body.

With the victory, the 30-year-old Ulysse, who is ranked amongst the top 10 in three of boxing’s major sanctioning bodies, improves to 18-1 (9 knockouts). He has now won his last four bouts since the loss to Claggett, with victories over Cletus Seldin and Ernesto Espana.

The fight was a rematch of their Oct. 4 clash, which ended in a split-decision draw after 10 action-packed rounds. The rematch did not mirror the competitiveness of the first fight, but there were still decent ebbs-and-flows between the two during the fight. 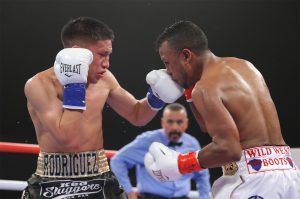 Franco and Negrete went it at again. Photo by tom hogan

Negrete, whose only defeat was at the hands of WBC junior featherweight titleholder Rey Vargas in December of 2017, effectively outboxed Franco during most of the first half of the fight. Negrete attacked the body, but a few of his left hooks strayed below Franco’s belt line, drawing several warnings from referee Ray Corona.

Franco, who is trained by Robert Garcia, threw several combinations in the pocket, but many landed on Negrete’s gloves or on his shoulders.

Sensing he was down late in the fight, Franco closed the distance between the two, throwing more wild hooks and crosses. Negrete attempted to counter Franco’s aggression from the outside.

“I thought I fought a good fight,” said Franco, who is originally from San Antonio and now lives and trains in Riverside, California. “I tip my hat off to him on a great fight.

“I thought I won the fight,” said Negrete, who is from Colombia and now resides in the Los Angeles suburb of Paramount. “The judges didn’t see fight that way. I won the fight more clearly than in the first fight.”

Thursday marked Esparza’s first fight since Apr. 6 of last year. Esparza temporarily stepped away from the ring when she became pregnant, giving birth to a boy on Jan. 3.

Vizcaino (9-9, 3 KOs) did her best work on the inside, but Esparza, who resides in Houston, would throw and land 2-3 punch combinations to the head and body before backing away from Vizcaino.

All three judges scored the bout 80-72 in favor of Esparza.

Sakai (23-10-2, 9 KOs) came to fight, countering Rocha at times to the head. Rocha, who is the younger brother of junior featherweight contender Ronny Rios, connected with the more-effective punches in the pocket.

Fringe junior welterweight contender Mike Reed returned from a 13-month hiatus to knock out veteran Yardley Armenta Cruz in the second round. Referee Eddie Hernandez stopped the bout at 1:45.

Welterweight prospect Raul Curiel (6-0, 4 KOs)stopped Andrew Rodgers (4-7-1 1 NC, 2 KOs) at the end of the second Rond when Rodgers was not able to continue due to an injury to his right knee. Curiel represented Mexico at the 2016 Olympic Games in Rio de Janeiro and is managed by Frank Espinoza.