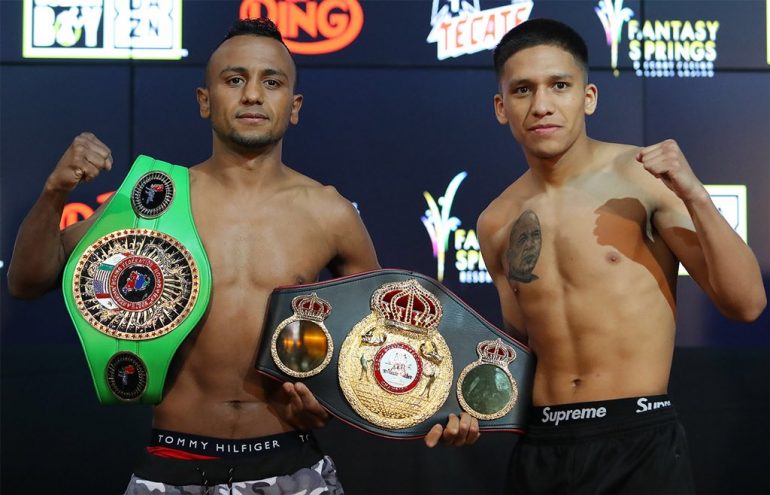 Their first fight was an all-out war, but Joshua Franco is ready for round 11 against contender Oscar Negrete.

At Thursday’s weigh-in, both Franco and Negrete weighed in at 117.6 pounds.

Franco and Negrete squared off at The Hangar in the Southern California city of Costa Mesa on Oct. 4, producing one of the best fights of 2018, ending in a split-decision draw. Immediately after the fight, both agreed to a rematch.

The 23-year-old Franco, who is originally from San Antonio, lives and trains in Riverside, California with trainer Robert Garcia. Franco believes he should have had his arm raised in victory after the first fight.

Franco has worked with Garcia since his pro debut in August of 2015. He credits his improvement on the amount of training and sparring he gets in the gym Garcia owns.

Franco is grateful for the relationship with Garcia, but more so from the knowledge he gets from Garcia.

The 31-year-old Negrete (18-1-1, 7 KOs), who is originally from Colombia and now resides in the Los Angeles suburb of Paramount, is currently ranked No. 4 by the WBC. Negrete’s only loss was when he moved up in weight to face WBC junior featherweight titleholder Rey Vargas in December of 2017, losing by unanimous decision.

Franco believes a victory over Negrete would put him one step closer towards a world title bout. He is currently not ranked by any of the major sanctioning bodies.

“Negrete has faced top opposition and I’ve looked better in my last couple of fights. My goal is to look sharp against Negrete and demonstrate that I’m the better man in the ring.”

“I’m going to not make this fight hard and go in there and get the win.”

Francisco A. Salazar has written for RingTV.com since October of 2013 and has covered boxing in Southern California and abroad since 2000. Francisco also covers boxing for the Ventura County (California) Star newspaper, Boxingscene.com, and FightNights.com. He can be reached by email at [email protected] or on Twitter at FSalazarBoxing