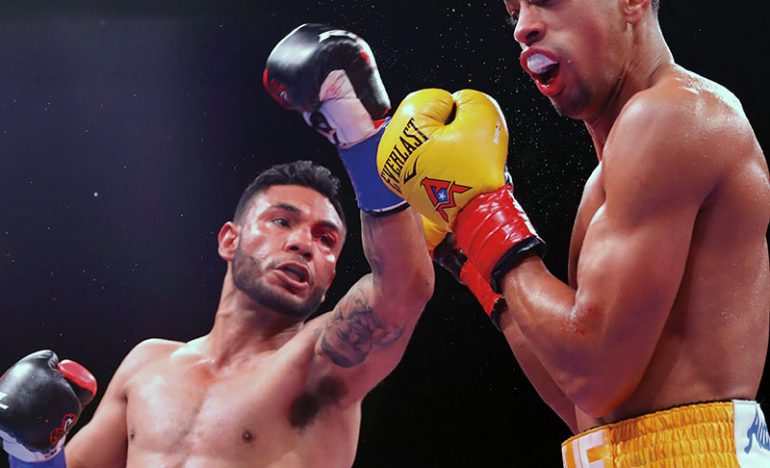 After pulling off one of the more significant upsets of 2019, Andrew Cancio will again square off against Alberto Machado on June 21, manager Ray Chaparro told The Ring Tuesday evening.

The 12-round bout will take place on June 21 at the Fantasy Springs Resort Casino in Indio, California and will stream live on DAZN.

The Golden Boy Promotions fight card was originally scheduled for June 8, but had to move to a later date to accommodate the clash between Gennady Golovkin and Steve Rolls, which will also mark Golovkin’s debut with DAZN.

Cancio (20-4-2, 15 knockouts), who resides in the boxing hotbed of Oxnard, California, overcame an opening round knockdown to drop Machado twice in round four, forcing referee Raul Caiz, Jr. to stop the fight. With the win, Cancio became the WBA junior lightweight titleholder.

The 30-year-old Cancio was not sure who he would face next. Machado was mulling over exercising his rematch clause, which temporarily opened the door for mandatory challenger Rene Alvarado. After several days passed, Machado finally decided to accept the rematch with Cancio.

Alvarado (30-8, 20 KOs), who resides in Managua, Nicaragua, is facing Eusebio Osejo in a stay-busy bout this Friday. Manager Carlos Ruiz told The Ring earlier this week Alvarado hopes to be put on the June 21 card, and would be ready to face Cancio if Machado backs out of the fight or cannot make weight.

Cancio will again have a partisan crowd in attendance come the night of the fight. Cancio grew up in the desert city of Blythe, which is about a 90-minute drive from Indio, where he was recently awarded the key to the city.

Cancio, who has a full-time job as a construction technician for the Southern California Gas Company, trains in Ventura. He is trained by Joseph ‘Hoss’ Janik.