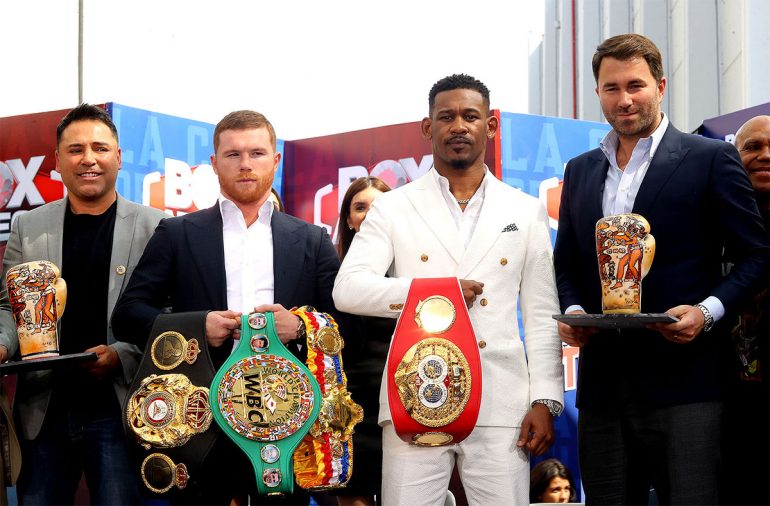 Right out of the gate, we can all acknowledge that he’s got a dog in the hunt.

Yes, Robert Diaz is a faithful Golden Boy Promotions guy, and is seen as being at the top of the list, with a couple other aces, as a matchmaker extraordinaire. So, I wouldn’t have been surprised to hear Diaz say he was excited about the forthcoming May 4 middleweight mashup between Canelo Alvarez and Daniel Jacobs.

But the degree of excitement Diaz shared with me…the level of expectations he’s set for the clash…well, it had me raising my eyebrows.

That ball got rolling when I saw a Tweet from Diaz:

Yeah? Really? I put it to Diaz, asked him if he didn’t want to dial back on setting the bar THAT high?

“I do believe it. Jacobs is the taller guy who can box and bang versus Canelo, the shorter guy who can bang and box and will look to get inside. I believe after a few rounds of feeling out, boom, we have a war,” Diaz answered.

OK, noted, I stated… I admitted such hype-talk, I’d ordinarily take with a grain and a half of salt… but from Diaz, well, I perked up.

“I thank you for that,” he said. “I do not usually compare, as the 80s to me was one of the greatest eras and today’s fighters are far from it, but this one, I believe, is dangerous and will bring sparks in the ring.”

We batted it back and forth… I wondered if he thinks Jacobs will move as much as some are assuming. If maybe he doesn’t get lured into more rumbling/trading than we’d perhaps believe would be prudent.

“He will try to use his height, reach and, end of day, if that doesn’t work his weight, which is when the fun will begin,” the matchmaker responded.

So… at around Round 5 things will get heated, you think?

“Five or six and second half will be epic and end with KO,” Diaz declared.

Again… the bar has been raised. So, when did Diaz start seeing Canelo-Jacobs as a possible/probable neo-classic, along the lines of that savage splendor that was Hagler vs. Hearns in 1985?

“When it was made it clicked, Hagler v Hearns, and again not many fights remind me of past fights, however, Canelo v Triple G did and this one did as well,” Diaz told me.

“Hand on the Bible, I see this one as a 50-50. Remember, I did many of Jacobs’ fights (he was signed to Golden Boy) and I know his ability. Kid has heart, talent and, most importantly, will. Canelo gets better and better in every fight and I believe Jacobs will bring out the best yet in Canelo,” the vet matchmaker continued. “Experience in big fights goes to Canelo and he will fight calm and relaxed whereas Jacobs will be tense and nervous for a few rounds.”

And then, Diaz says, that’s when we will get the nuclear reaction, and the festivities will…

Well, let a 2010 Sports Illustrated piece on Hagler-Hearns by Lee Groves remind us of what was and what could, if we are fortunate, be, on May 4, in Las Vegas:

“For those who were lucky enough to witness their battle for the undisputed middleweight title 25 years ago today, their hyphen-linked names remain a short-cut method of describing the kind of robust, vigorous combat that is promised so often in pre-fight promotions, but seldom fulfilled.

Their eight minutes of mayhem remains the gold standard in terms of succinct savagery between members of the boxing elite and serves as validation for those who must explain to their friends why they love boxing so much.”

If we get 75 percent of that case study in structured and (barely) contained violence, we will all be left as satisfied patrons. If Diaz is right, we will be left awe struck.