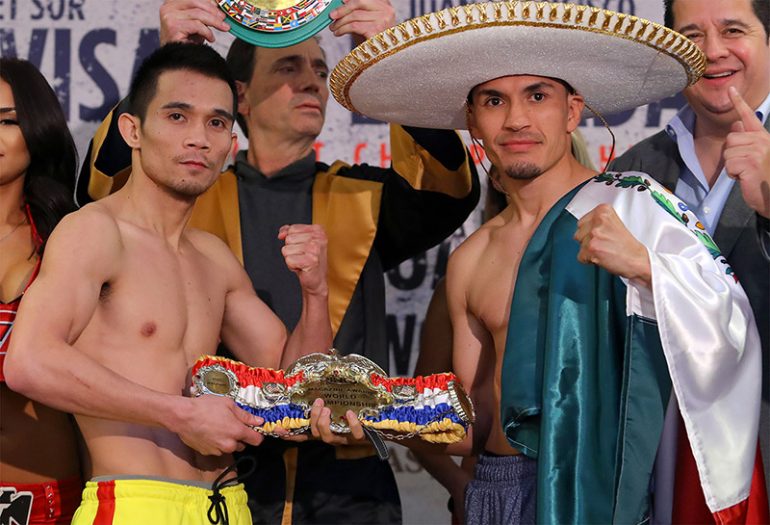 Hard-hitting Srisaket Sor Rungvisai will put his Ring and WBC junior bantamweight championships on the line against Juan Francisco Estrada in an eagerly anticipated rematch at the Forum in Inglewood, California on Friday.

Both fighters met 14 months ago at the same venue. On that occasion, the Thai held off a spirited effort from the Mexican former champion in an action-packed bout. Due to the closeness of that first encounter, both men agreed to meet a second time.

Sor Rungvisai, who is ranked No. 8 pound-for-pound by The Ring, turned professional in March 2009. He went 1-3-1 in his first five fights but improved significantly, winning the WBC 115-pound strap in 2013 before losing it the following year. Sor Rungvisai (47-4-1, 41 knockouts) later caused a sensation in 2017 when he regained the title, becoming the first man to beat Roman Gonzalez before knocking out the former pound-for-pound No. 1 in their rematch. He has now made three successful defenses.

Estrada, who is rated No. 1 by The Ring at 115 pounds, turned professional in 2008. The Mexican star lost a hard-fought decision to Roman Gonzalez in 2012 before upsetting Brian Viloria five months later to win the WBA and WBO flyweight titles. Estrada (38-3, 26 KOs) made five defenses before moving up in weight.

The first fight was very close, both men had their moments, but who will be able to adapt best in the rematch? Sor Rungvisai looked the physically stronger and is the bigger puncher but Estrada appeared to figure Sor Rungvisai out in the later rounds. Will he be able to box enough to win more rounds than the swarming Thai? At what point will the 50+ professional fights and physically demanding camps tell on Sor Rungvisai?

LEE GROVES: ESTRADA UD
While Sor Rungvisai performed very well against Estrada in fight one, I believe that there is room for improvement for Estrada, who nevertheless was the stronger finisher and hung tough with the Thai in the trenches. One is his vaunted second-half surge, which started a couple of rounds too late in fight one, and the other is making sure there is more distance between them for longer periods of the fight. I believe Estrada proved he has the chin to take Sor Rungvisai’s thunder, the ring science to take advantage of the openings the Thai presents, and the defensive skill to keep Sor Rungvisai’s vaunted offense in check.

MARTY MULCAHY: ESTRADA SD
I keep waiting for the Srisaket Sor Rungvisai bubble to burst, and Estrada nearly did the trick last year in their close back-and-forth battle. In 50-50 fights like this the better prepared boxer usually pulls out the victory, and I believe the younger Estrada has a tiny advantage here given his sparring and travel demands on Rungvisai. This time around I don’t think Estrada will need to battle back from an early knockdown or pursue a big punch to turn the momentum quickly. This time, Estrada boxes from the outside and catches Rungvisai reaching or coming in. Estrada will take punishment and need to lean on his body shots, as he did in the middle rounds of last fight, but will sweep the championship rounds to win another close fight between the duo by split decision to set up a satisfactory trilogy.

MICHAEL WOODS: SOR RUNGVISAI SD
Sor Rungvisai’s won 20 in a row since taking an L at the hands of Carlos Cuadras way back in 2014. He’s 32 now, the mileage has piled up. Is now the time that Srisaket tastes from the bitter chalice again? Nah… his volume will be the difference maker versus Estrada, and no, he won’t notch the KO he’s craving. But he hasn’t gotten old since their first tango in Feb. 2018. I expect the same level action, maybe a tick better because Estrada will be motivated by the narrow nature of the loss the first time around.

TOM GRAY: ESTRADA UD
The first fight was extremely close, and Estrada seemed to have solved the Thai power-puncher’s style in the late rounds. My instincts tell me that the more cerebral and technical fighter, Estrada, will do most of the improving for the sequel. I expect another highly competitive fight, but El Gallo comes of age with a career-best victory and finally gets the credit he so richly deserves.

NORM FRAUENHEIM: ESTRADA SD
It’ll be close, very close. But the technically-skilled Estrada knows that. His narrow loss, majority decision, to the powerful Srisaket Sor Rungvisai last year serves as a guide on how and when Estrada will employ his versatile skill set in the rematch. Guess here: Estrada will fight a more measured bout, practicing patience in the early going and wariness in the middle rounds when the instinctive Srisaket figures to again gain momentum. The younger Estrada’s technical know-how will allow him to deflect Srisaket’s dangerous power and leave him with just enough energy in the final couple of rounds for a scorecard victory over a 32-year-old Thai who has been throwing – and taking – punches as a pro since he was 16.

ANSON WAINWRIGHT: SOR RUNGVISAI MD
What I can’t say with any real conviction is who will win the fight, but I know boxing fans will be the real winner. This is as much of a can’t miss fight as you’re going to get in boxing. Both men fought on close to even terms 14 months ago. We learned that the defending champion is stronger and the harder hitter, but the Mexican was skilled enough and smart enough to run him mighty close. I think Estrada was coming on late in the first encounter and think that experience will serve him well. However, Sor Rungvisai will be in superhuman shape and use that brute strength to be the aggressor to edge matters in a humdinger of a bout.

RUDY HERNANDEZ (TRAINER): SOR RUNGVISAI UD
Don’t see Estrada winning rematch. I think Srisaket will win again. It’s his time and he’s riding high. His confidence is at another level and his will to win is right there with him. Srisaket by unanimous decision. If Estrada comes to fight, toe to toe, Srisaket by knockout within 10 rounds.

ROGELIO ESPINO (PROMOTER, PROMOCIONES Y EVENTOS DEL ISTMO): ESTRADA UD
For me Estrada won the first fight and should win this time also. I don’t remember the exact score. It was a close fight but I had Estrada winning for at least two points. This time I think Estrada should win more clearly. Srisaket is a very strong boxer so this fight will go the distance.

KAL YAFAI (WBA JUNIOR BANTAMWEIGHT CHAMPION): ESTRADA
I’m going with Estrada points. Think he will be busier earlier. Got to deal with mandatory next, then I want Sor Rungvisai-Estrada winner. Big names and unifications unless the team decide otherwise. I’m easy.

MIKE ALTAMURA (MANAGER): ESTRADA UD
Two of my favorite fighters in recent years facing off once again. Their styles meshed wonderfully in their first encounter, and I feel Estrada stood his ground too much and contested at SSR’s range. I think he’ll focus more on utilising his underrated countering skills this outing. It’s a tough call, but I see Estrada finding a way to edge enough rounds to pull out a tight unanimous decision, naturally setting up a classic rubber match.

ANDREW MOLONEY (JUNIOR BANTAMWEIGHT CONTENDER): ESTRADA UD
I believe Estrada is a far more skilled boxer than Sor Rungvisai. In the first fight Estrada started very well and was doing a good job of out boxing Sor Rungvisai. From the middle of the fight he began to stand and trade punches with the Thai, which ended up costing him the fight. I predict we will see a far more disciplined display from Estrada this time around and I expect him to use his boxing skills to outbox and outpoint Sor Rungvisai over 12 rounds.

TONY TOLJ (MANAGER): ESTRADA UD
Estrada v Sor Rungvisai has all the makings for a barn burner. Both fighters are class acts and I was there for SuperFly in California. Sor Rungvisai can seriously punch, I personally saw him put Chocolitito to sleep. I believe Estrada will be too slick, too evasive this time round. Short answer, never back against a Mexican in Northern Mexico, also known as U.S.A. Juan Francisco Estrada UD.

BRAD GOODMAN (MATCHMAKER): ESTRADA
I like Estrada by late stoppage. I just think Estrada is coming on lately and has the momentum. Also finished better in the first fight.

DUKE MCKENZIE (FORMER THREE-WEIGHT WORLD TITLEHOLDER/TV ANALYST): ESTRADA
The only way I can describe this rematch is WOW! Srisaket vs. Estrada II cannot fail to deliver. Yes, the first fight was close with Srisaket scrapping home with a narrow points win, but Estrada being desperate for revenge, I lean towards him. It is rare that fights like this come about in the lighter weight divisions. Estrada late stoppage.