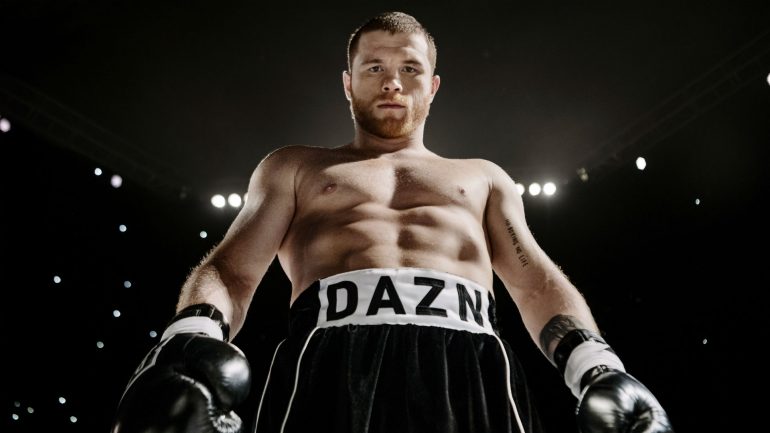 The Saul “Canelo” Alvarez and Daniel Jacobs middleweight title unification bout May 4, broadcast live and exclusively on DAZN, is arguably the most anticipated fight in the first half of 2019. Due to the magnitude of the event, it is getting superstar treatment.

On Wednesday, DAZN announced a partnership with Uninterrupted to launch a new docu-series called “40 Days,” chronicling the buildup to Canelo vs. Jacobs.

We are pleased to announce that @UNINTERRUPTED is set to produce a new docu-series titled “40 DAYS” in lead up to #CaneloJacobs. pic.twitter.com/87HYlmizoN

Uninterrupted, the athlete empowerment brand founded by NBA superstar LeBron James and his lifelong friend and business partner Maverick Carter, and the global streaming service will produce a slate of content in the boxing space, telling the stories of today’s most high-profile boxers. The premiere edition of “40 Days,” for which James and Carter are serving as executive producers, will feature a behind-the-scenes look at the preparation of Alvarez and Jacobs leading into the fight.

Join DAZN to watch Canelo vs. Jacobs and 100+ fight nights a year

The “40 Days” idea came from the fact that grueling preparation for a megafight requires about eight weeks of intense training Monday-Friday. Part 1 of the documentary will premiere on Uninterrupted and DAZN on April 23, followed by Part 2 on April 30.

“We’re partnering with DAZN to reach a whole new audience of global boxing fans that want to see another side to these athletes that has yet to be shown,” Uninterrupted’s CEO Maverick Carter said in a press release. “These documentaries will shine a light on the three-dimensional aspect of who these athletes are outside of the ring and empower them to tell their own stories as they prepare for some of the biggest moments in their boxing careers.”

•  What sports are live-streamed on DAZN?

•  How much does DAZN’s live sports streaming service cost?

Alvarez (51-1-2, 35 KOs), the WBA and WBC titleholder, is unbeaten in his last nine fights (9-0-1) since suffering the only blemish on his record to Floyd Mayweather Jr. in September 2013. After two brutal wars with Gennady Golovkin, Alvarez moved up to super middleweight in December and plowed through Rocky Fielding in three rounds to capture the WBA belt to become a three-division world champion.

Meanwhile, Jacobs (35-2, 29 KOs) has rebounded in a big way after losing the WBA title in a very narrow decision to Golovkin in March 2017. He’s won three straight bouts, with the highlight of defeating Sergiy Derevyanchenko by split decision October to win the IBF title.