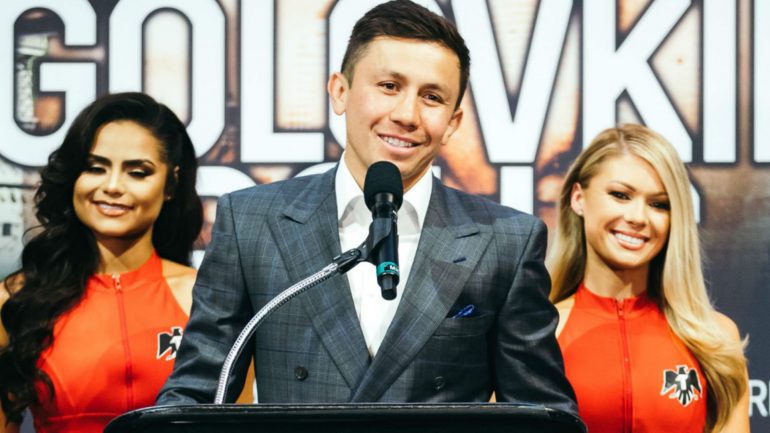 NEW YORK — Gennady Golovkin arrived at the Delta Lounge at Madison Square Garden for his pre-news conference VIP session with the media Monday, looking cool and calm, knowing that he was going to get asked plenty of questions about unified middleweight champion Saul “Canelo” Alvarez and wanting to give his best politically-correct answers.

When Sporting News asked about what he thinks the deciding factor between Alvarez and Daniel Jacobs will be during their title-unification fight May 4, considering he’s faced both, Golovkin responded through an interpreter: “It’s hard for me to tell. They’re different boxers with different styles, but it’s going to be an interesting fight no matter what and I think the winners in that fight will be the audience.”

MORE: Join DAZN and watch Canelo vs. Jacobs on May 4

When SN later asked “GGG” if months removed from his majority-decision rematch loss to Alvarez helped him to understand how judges ruled in his rival’s favor, Golovkin was equally short and to the point.

“I understand, I understand everything,” he offered. “I’m very comfortable where I’m at in boxing.”

But when informed by another reporter that Alvarez recently said Golovkin would need a title of his own for a possible trilogy fight to happen, GGG’s calm briefly cracked.

“I think Canelo is not correct to say that,” Golovkin said. “We have to live and see what’s going to happen before we can decide.

“Of course I’m hoping the fight will happen, but it’s not because I will or will not have a title,” he continued. “We’re not going to look at what he’s demanding — such as a title. I’m hoping to fight him, title or not.”

While Golovkin dodged some questions about his rival, answering others more head on, GGG can’t hide his vitriol for Canelo even if he tries. That’s abundantly clear.

It’s a beyond-heated rivalry seeped with bad blood in the aftermath of Golovkin feeling like he defeated Canelo in two consecutive Septembers. Their first bout in 2017 — which most media and fans alike thought Golovkin won handily — was ruled a controversial split draw.

Then, last September, Alvarez returned from a sixth-month suspension for two failed drug tests earlier in the year and walked GGG down en route to a majority decision. That being said, plenty of critics and fans alike felt like Golovkin did enough to win the rematch as well.

All this history brings us to Monday and Golovkin (38-1-1, 34 KOs) holding a New York City press conference to formally announce his fight against relatively unknown Canadian boxer Steve Rolls (19-0, 10 KOs) at MSG on June 8, live and exclusively on DAZN.

If you wanted to further get a feel for how much exacting revenge against Alvarez is on Golovkin’s mind, simply read between the lines about how he analyzes Rolls, who he views as a clear stepping stone in his path to possibly meeting his nemesis for a third consecutive September.

“Honestly, I didn’t know a lot about him,” he said. “But because DAZN is trying to establish themselves in Canada — and Steve is from Canada — we figured that this would be a good starting point for us.”

MORE: Join DAZN and watch GGG vs. Rolls on June 8

“A good starting point” to land that highly-anticipated trilogy against Canelo, as long as the face of boxing is able to get past Jacobs on May 4 first.

It’s not that he’s overlooking Rolls. It’s more like he’s 100 percent confident that he’ll get past him. That’s the very reason that a more serious threat to upset that applecart — like WBO middleweight champion Demetrius Andrade — wasn’t named as Golovkin’s opponent, as explained by GGG’s manager and promoter, Tom Loeffler.

Golovkin promoter Tom Loeffler explains why it’s Rolls for this fight and not Demetrius Andrade nor Billy Joe Saunders. (Of course there’s upsetting plans for a trilogy with Canelo as well).#GGGRolls pic.twitter.com/PeuvxrCe6n

After all, it’s a key reason that Golovkin signed a six-fight deal with DAZN in March.

“That third fight between GGG and Canelo still is one of the biggest fights in boxing and a big reason why Gennady is fighting with DAZN is because that is the clearest path for that,” Loeffler further told reporters Monday. “DAZN obviously wants that fight for its subscribers.”

For good measure, Loeffler also relegated Canelo’s recent title stipulation toward GGG as nothing more than “posturing” and placed emphasis on the location of a third fight between the two, considering judges twice controversially ruled in favor of Alvarez in Las Vegas.

All this being said, the trilogy being cemented for September is a big if, considering Jacobs has all the tools to defeat Alvarez come Cinco de Mayo weekend in what has been dubbed a 50-50 fight.

That and Jacobs believes that he defeated GGG in their March 2018 bout that was awarded to Golovkin by unanimous decision.

“I’ve always known in the back of my mind that GGG knows he lost that fight,” Jacobs re-asserted earlier this month during an interview with SN. “I could see it in his eyes when they gave him the decision.”

While Golovkin doesn’t carry the same vitriol toward Jacobs as for Canelo, there’s no love lost between he and “The Miracle Man,” either.

“I don’t speak for others. I only speak for myself,” Golovkin told SN when asked for a response to Jacobs’ comments. “It’s actually just good tact to not speak about other fighters, so I speak only for myself.”

Still, you already know he wants Canelo in the ring for the third time for the opportunity to secure an undeniable victory and the lucrative bag that comes with it.

What a “big drama show” that would be.