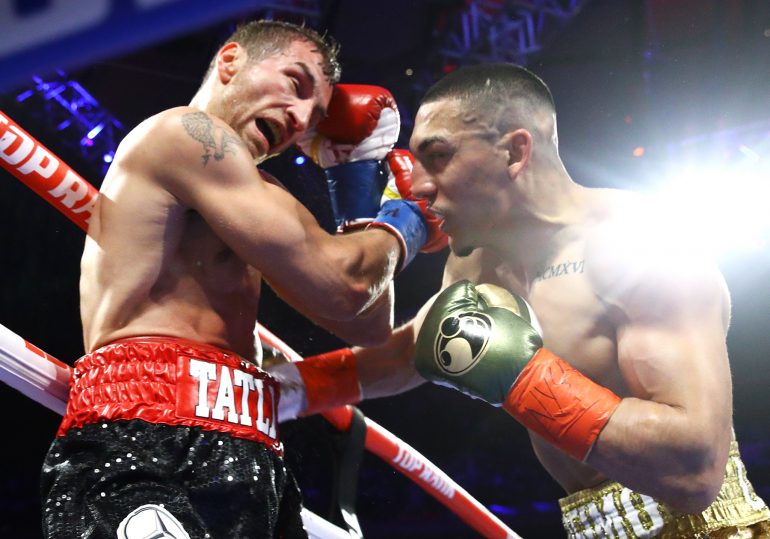 Pro tip: Most deadline writers pre-write a bit of their story, and then fill in blanks, so they can file the story as quickly as possible. I do this, and I did this for this story. I typed in “In the first,” “In the second round,” In round three,” and then I stopped.

Should I bother with four, and five, and so on? After all, Teofimo Lopez has been a viral video maker of late, and you had to believe, if you saw him cracking pads on Wednesday at the media workout, that he would quite possibly be dropping and stopping Fin fighter Edis Tatli at Madison Square Garden, on Saturday night, in the big room, sooner rather than later.

Good choice, from the perspective of saving energy; because Lopez, the 21 year old Brooklyn born contender—we’ve shelved the term “prospect” for the now 13-0 135 pounder–did indeed end it early.

In round five, a sneaky combo did in Tatli. A throwaway jab to the body froze the Fin and a right hand to the body sent the loser to the mat, he was unable to continue. The NABF 135 crown is Teofimo’s to wear proudly.

The loudest roar of the night came when the ring announcer said, “From Brooklyn, New York..” And before that, coming to the ring to Frankie’s rendition of “New York, New York”….Yeah, Lopez had them where he wanted them, craving entertainment, with a Tysonesque edge to him. He could end it at any time, from 1 to 10.

Lopez, cornered by Teofimo Lopez Sr., his father and biggest loyalist, came out patiently stalking the Fin who entered at 31-2. Word was that Tatli, whose best win came versus Francesco Patera, had never ht the deck. Until now…

“I didn’t have the best camp, but I did what I needed to do and came out victorious. I knew I was going to get him with a body shot. I softened him up and finished him,” said the winner after. “I want a world title shot next. That’s what I want. We promised to take over the show, and once again, I took it over. I’m ready for Richard Commey or the WBC title. As long as it’s for a title, I am ready to go. No one can take my power.”

In the first, the 31 year old Tatli, born in Kosovo, stood tall, straight up. Teo jabbed, got loose, got a sweat going. He dipped left, threw a hookercut…Patient, stalking, not pressing too hard to deliver the viral goodies. Tatli didn’t fight scared but he was respectful, he’d seen video after all.

In the second, Teofimo accelerated. He jabbed more, upped the activity. Tatli wanted to work the jab, keep Lopez at bay, and he did succeed in getting to the third round.

In the third, Tatli opened up some. But he also then got back on the bike, made sure to keep moving, so Teofimo didn’t get a groove on him. (Judge Benoit Roussel scored the third for Tatli, for the record.) I had to type in my round numbers now…

In the fourth, Teofimo looked methodical, focused, and he was working the right more. Tight shots, from close-middle distance, he had Tatli back-tracking.

To round five—Lopez sent Tatli down. And out….No mas. It was a throw-away jab to the gut, followed by a right to the side. It was an organ grinder, at 1:32 of the fifth.

“The Takeover,” it is probably just getting started but the kid knows what the people need and crave. Stoppages send ’em home happy.