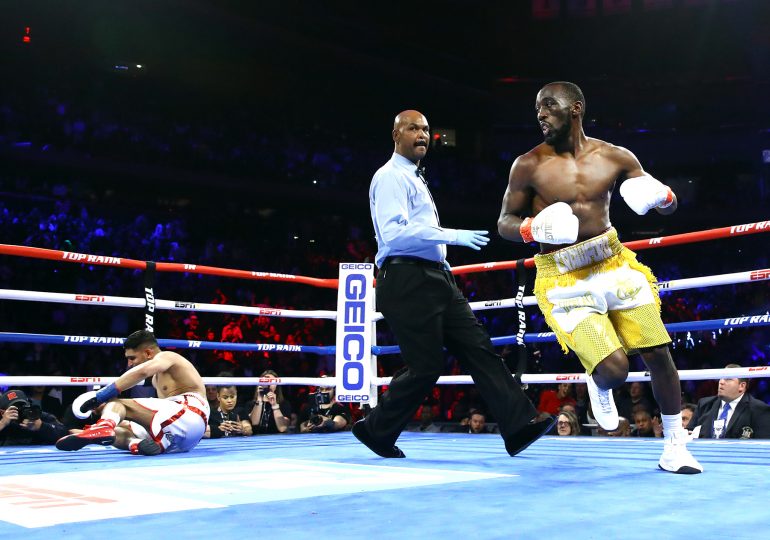 NEW YORK – The Knicks may not be in the post-season, but Terence Crawford made sure to dribble Amir Khan all over Madison Square Garden on Saturday night.

After five-plus rounds of a punishing beating, Khan’s corner pulled the plug on the fight during a referee’s timeout following a low blow that looked to hit more thigh than groin, bringing a disappointing end to the ESPN pay-per-view main event.

The official time of stoppage was 47 seconds of round six, with Crawford (35-0, 26 knockouts) winning virtually every second of the action before Khan’s trainer Virgil Hunter pulled his fighter out.

Khan, no stranger to big fights, got off to a confident start with his jab, which has been his best punch since he emerged out of the 2004 Olympics with a silver medal at age 17. That all changed two minutes into the first when a counter right hand sent Khan down to the canvas.

As game as he is chinny, Khan (33-5, 20 KOs) rose up from the canvas and sought to survive but was wobbled once again by a right hand and did the dipsy doodle at the bell. Khan came back resolutely in round two, pushing Crawford back with a right hand, and then slipping in another one to begin the third. Crawford, an ambidextrous fighter who generates power from the right side and elusive boxing from the southpaw side, came out with his right foot in front in the third, perhaps deciding that Khan wasn’t yet there to be taken.

That perception began to change in the fourth when Crawford, boxing conservatively from the southpaw stance, rocked Khan repeatedly with right hook counter and followed to the body, while Khan was a welcoming target standing upright.

Everything Crawford touched him with seemed to wobble Khan, and Crawford looked like he could have finished the fight at any moment he chose to.

“I could tell I was breaking him down. It was just a matter of time,” said Crawford.

“I was disappointed the corner stopped the fight in that manner, but Virgil is a great coach, and he was looking out for his fighter. I know he didn’t want to go out like that.”

Unlike an accidental foul like a blow to the back of the head or a late punch, a fighter cannot win on a low blow. Per NYSAC rules: “A fighter who is hit with an accidental low blow must continue after a reasonable amount of time but no more than five (5) minutes or he/she will lose the fight.” 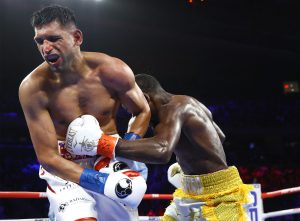 While there was very little to prove from a competition standpoint, Crawford showed he could draw a crowd outside of his hometown of Omaha, Nebraska, bringing in an announced attendance of 14,091.

For Khan, it’s an anticlimactic ending that led to his fourth loss inside the distance. Khan had been hoping to rebuild himself after his last loss, also in round six, on a single right hand from Canelo Alvarez in 2016.

After the loss to Alvarez, Khan embarked on a comeback tour that looked more like a personal vendetta against the city of Toronto, defeating Phil Lo Greco in 39 seconds and then getting off the canvas to outpoint Samuel Vargas.

Crawford, viewed by many as the sport’s best fighter regardless of weight today, is no Lo Greco or Vargas.

Crawford retains the WBO welterweight title for the second time.

Afterwards, Crawford made no secret about who he wants in his next fight.

“The fight I want next is Errol Spence,” Crawford said. “Whenever he is ready, he can come and get it.”

The primary road block to the fight is that Crawford is aligned with Top Rank, while Spence, the likewise undefeated IBF title claimant, is handled by Al Haymon’s Premier Boxing Champions, just like virtually all of the other significant fighters at 147 pounds.

Top Rank boss Bob Arum said he wanted to make the fight but shifted any blame for it not having happened already to PBC.

“We want to fight Errol Spence. Everyone wants the fight. There is one guy stopping it, and that is Al Haymon,” said Arum.

The fractioned nature of the sport is the toughest opponent for Crawford today. While Crawford is rated higher than Spence on The Ring’s pound for pound list, no. 2 to no. 5, Spence is rated the top welterweight, with Crawford right behind him.

To find a welterweight contender on the list who isn’t controlled by Al Haymon, or someone Crawford hasn’t already KO’ed (Jeff Horn), one would have to look to no. 9, Jessie Vargas from DAZN, and Top Rank’s Egidijus Kavaliauskas at the ten spot.