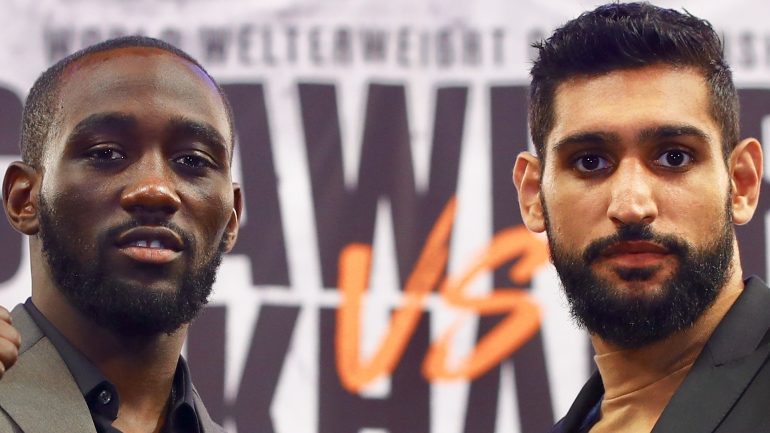 The undefeated WBO welterweight champion is perched on a countertop, hands interlocked in his lap and eyes focused on Amir Khan, about 100 feet away on the opposite side of the room.

This was the scene Wednesday before Crawford eventually explained his laser focus during the final presser.

“I don’t believe no fight that I fight is just another fight for me,” Crawford said on the dais, with Top Rank founder and CEO Bob Arum seated just to the left between him and Khan. “I believe that all fights that I fight from here on out are for my legacy. That’s why I want the biggest fights out there.”

Although he’s a heavy favorite going into their fight Saturday — the inaugural pay-per-view under the Top Rank on ESPN banner — Crawford isn’t viewing Khan as the man who got slept by Canelo Alvarez via a vicious right hook in 2017 or the man whom Danny Garcia stopped in just four rounds in 2012. He sees “King Khan,” the man who has never lost a bout at 147 pounds.

“Amir Khan is a great fighter. I can’t take nothing away from (him),” Crawford said. “He’s done a lot in the sport of boxing. He has a big name. He’s undefeated at the welterweight division, so why not take another step up?”

Crawford says every fight from here on out is for his legacy.#CrawfordKhan pic.twitter.com/zH4guhnl45

Yes, there’s no doubt Khan represents the biggest-name opponent for Crawford to date, but when it comes to a true legacy fight, one that will cement Crawford’s standing and leave no doubt he’s the best pound-for-pound boxer in the Sweet Science and perhaps this generation, there’s one name and one fight: Errol Spence Jr.

Without saying the IBF welterweight champion’s name on Wednesday, Crawford acknowledged Spence, saying the highly anticipated unification fight will happen when “The Truth” and his representation at Premier Boxing Champions want it to happen.

“It’s not my job to worry about that,” he continued. “I just have to keep fighting the fights that they put in front of me and feed my family.”

Crawford says he can’t force Errol Spence Jr. to fight him — without mentioning Spence’s name — adding that the mega fight will happen when Spence wants it to happen.#CrawfordKhan pic.twitter.com/9R4SwWehxf

MORE: Crawford vs. Khan: Odds, expert pick and how to bet

This comes in response to Spence holding court on Instagram Live last week and telling his fans, “You don’t want to see me fight Terence Crawford. … I’d beat that boy’s ass,” before suggesting he might pull up to the Garden to catch Crawford-Khan and possibly confront “Bud” thereafter.

The rivalry has been on this collision course to boxing supremacy for some time; Crawford and Spence had a rather conspicuous run-in in November. Two months prior to that, Spence told reporters Crawford “hasn’t beaten nobody,” to which Crawford responded by saying Spence was drunk.

For what it’s worth, Arum told Sporting News he’ll do everything in his power to make Crawford-Spence happen after the Khan bout.

“I told everybody that Tuesday or Wednesday after this fight — if Crawford wins the fight, forget how he looks, if he wins — I will try to talk to Al Haymon about making a Crawford-Spence fight forthwith,” Arum said. “We’re ready to go, man.

Arum compared Crawford to Marvin Hagler for their “taciturn” personality outside the ring, and Sugar Ray Leonard for their punishing fighting styles inside it. Well, Leonard and Hagler had each other — not to mention Thomas Hearns and Roberto Duran — during a real golden era of boxing.

Similarly, Crawford (34-0, 25 KOs) and Spence (25-0, 21 KOs) have each other to cement an undeniable boxing legacy. Another undefeated welterweight champion, WBA titleholder Keith Thurman (29-0, 22 KOs), reigns in the same division, but everything still points to Crawford-Spence being the fight at 147.

So, while Crawford prepares to clash with Khan on Saturday at the “World’s Most Famous Arena,” “The Truth” is that the Spence fight is the one. And everyone knows it.