Selling Crawford-Khan at The Garden, Bob Arum is on his A-game 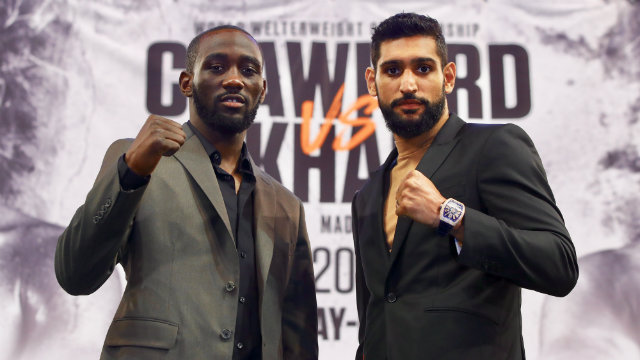 There may well not have been  and there may not ever be one better, at hyping it up, playing the optimism card, working hard to make you think that maybe, just maybe, a modern day classic will unfold Saturday night at the site of so many other majestic rumbles, at center ring in the big room of Madison Square Garden.

Bob Arum, he’s 87, and it is clear, that the creator formed The Bobfather, and then broke the mold, while chuckling and muttering under breath, “Wait’ll you see THIS.” No more Bobs; he’s part Brooklyn bluster, part Vegas barker, prone to mixing over the top hyperbole and then surprising candor within a 30 second span.

We saw and heard it during the Wednesday press conference which heralded elements of the first-in-a-long-spell ESPN PPV. That production will feature Terence Crawford, the Nebraska resident who worked his way up the Top Rank ladder, to the Garden’s small room, to the big space, where he’ll seek to fill it up in concert with 32 year old Amir Khan. He’s the Brit who has been dropped and stopped a few times, but holds on to a strong sense of self, a certainty – which may well prove delusional, if we are being bitterly honest – that he can upend the 34-0 (25 knockouts) Crawford, age 31,  and get himself slotted into that pound for pound top ten.

It was fascinating to see the mix of characters and the jostling, often silent, done by these principals, and as much or more so by some of the “support” players on the nine scrap promotion. Top of the list in that sphere was Teofimo Lopez. He stood out for his professionalism and poise and patience in dealing with the press. Because Khan is pretty much a high wattage star in the UK, he was doing lots of UK press, and a husky bouncer type cleared out space for the boxer in a manner that suggests he also does the same for pop stars and Kardashians. And Crawford had his fight week game face on, saying no to questions from press persons while he sat and took in the scene, as Arum and support personnel like Lopez, Felix Verdejo and the like mingled and answered queries. Bud said he wanted to save his voice for the actual press conference, which was presided over by Crystina Poncher.

I had my phone plugged in, in the room which held the pre-press conference media mashup, and went to get it, while Bud and Bob and Amir sat on the stage. And there was Lopez, answering questions from young gun videographers, who have now overtaken print media at these sorts of occasions. He would be making sure each guy got their time with him. He would be gracious and generous with his time and those young journos would be appreciative. My guess would be that co-manager James Prince offered him some stern-ish wisdom on how to conduct himself moving forward, to best serve his professional and personal development.

Yes, jostling, often subtly, but there to see if you knew what to look for. Shakur Stevenson has been saying that he is the best young prospect in the game and thinks he should be higher on the bill, above Lopez, who meets Euro lightweight Edis Tatli, who has never been knocked down. The New Jersey native boxer is hoping his showing puts more distance between him and the video which came out two weeks ago, which saw him engaged in an ugly street brawl in Florida, last summer. People close to him say that he’s seen the light, isn’t hanging out with any bad element sorts, and is fully dedicated to doing all his fighting for a fee. But one would think the legal ramifications of that brawl have to hang a cloud over his 21 year old head. He didn’t betray that, I don’t think, but a media handler was there to help steer conversations away from the video.

Back to Arum…He was ON during the Wednesday session, which had a setup which allowed attendees to look up and see the jumbotron touting this Top Rank fight fiesta.

He compared Crawford to Sugar Ray Leonard, who he handled for many bouts, and declared that the Crawford-Khan clash would be talked about like Hagler-Leonard or Hagler-Hearns is. Long after I’m gone, he stated, people will talk about Crawford-Khan. Lord, points for boldness in messaging, I said to myself, and wondered if the OG deal-maker didn’t maybe have a sixth sense of how this welterweight tango would turn out that would leave doubters having to tip their cap to him and acknowledge his instincts.

On Tuesday, Arum said that he expects an extra special effort from Crawford, who he believes will get extra zest from being in the building that has housed all the greats, except for Mayweather, who didn’t want to pay the NYC taxes. No offense to Barclays Center, I’m sure it’s a nice joint, he told me, but MSG is where it’s always been at. That message had more impact with the knowledge that The Mecca has been home to Crawford and Lomachenko bouts, in the theater and big room, and that boxing is in the Hulu Theater on Friday, April 19 for the amateur Ring Masters Championship series (6 PM start), then June 1 for a heavyweight clash pitting Anthony Joshua against TBD, and the following week, the return of middleweight royalty Gennady Golovkin, getting the rust off against Steve Rolls. 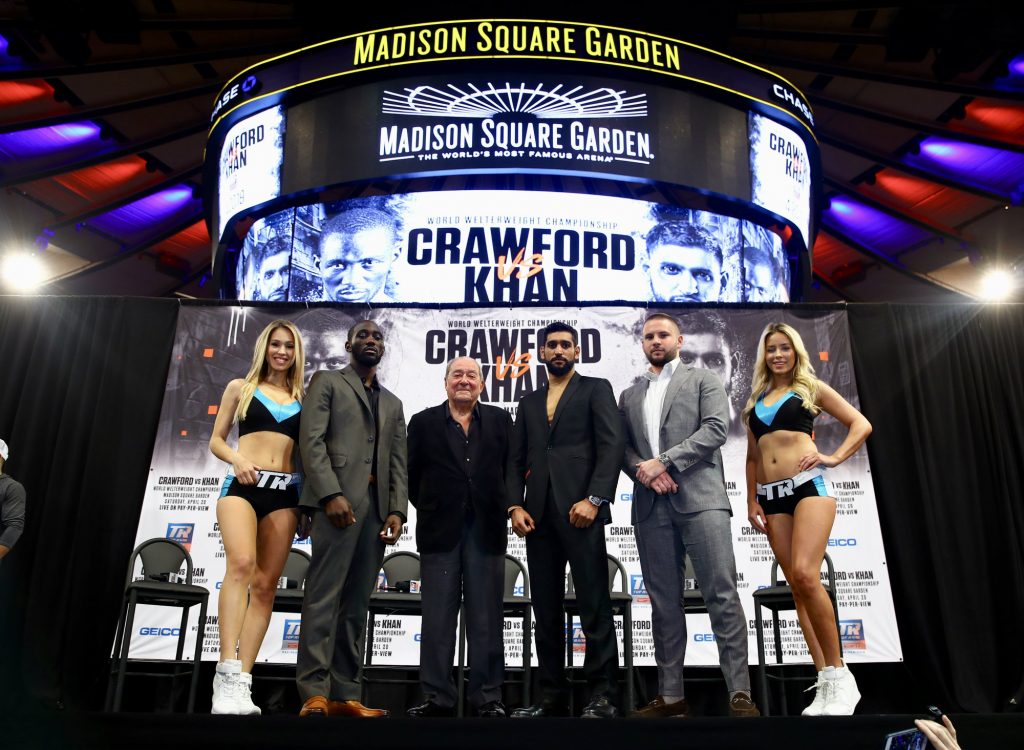 All in all, for an event like this, Top Rank would want Arum on his A game. Crawford is a reluctant participant in much of the media stuff, though his trainer Brian Macintyre picks up the ball and enjoys running with it. Khan is a pro’s pro, he makes even a doubter adjust the odds mentally because he evinces such belief in self, but no, he doesn’t “go there,” and stir up hype in the way that the social media age requires, with faked animosity, shoving and death threats. And Arum came through…Without notes, he ran through the fights on the card, and ticked all the boxes, showing love to the guy who Crawford manages, Lawrence Newton, who is 11-0 and scraps Saturday. You will love the Carlos Adames vs. Frank Galarza fight, he stated, and he cracked that he didn’t know why Lopez, who typically works like he has a date he wants to complete before midnight, was in a set for 12 rounder. “It’s more money,” said Lopez, and Arum pondered for a half second, and said, “Well, that’s a good answer.”

He showed equal love, I think, to Stevenson, who he called a “great, great fighter,” and said his matchmakers told him maybe Christopher Diaz is too tough a test for the Newark boxer. He assured us that Felix Verdejo is “back on track” after losing in the Theater last March.

Crawford and Khan showed respect for each other, with Khan telling us he will be peak Khan, because he’s back with Virgil Hunter and also because he is better able to get up for these mega fights. Crawford said he doesn’t love it that he doesn’t get the credit he feels he deserves, but he’s in a mode now he will just take the fights he’s given and look to win and that’s that. Of a fight with Errol Spence, he said, “It’s not my job to worry about that, I have to fight the people they put in front of me.” In the audience, I dare say many if not most folks were thinking that the stakes would be such in a Crawford vs Spence fight that full and due credit would go the victor.

Forgive me, Arum’s manner grabbed much of the spotlight. He drew a low chuckle for those respecting his game when he said he’s enjoyed watching Khan “box to perfection.” And you had Arum thinking big picture, too, when he told us that he has an Indian fighter on the card, one Vikas Krishan, and you could hear the gears whirring in Bob’s head, tallying up the percentage of new possible fight fans in India who could grow Top Rank world market share.

It will be interesting to see how this card plays out. Will this main event play out more as Arum laid out, a classic which I will be telling my grand-kids about…or something less grandiose? Will Lopez once again furnish a viral video finish, and have his low key in-house rivals clenching their jaws? Will Arum get to that sellout he said we’d see on Tuesday, as approximately ten thousand seats have been sold, I was told, as of Wednesday afternoon. Fox trots out “free boxing for all” with Danny Garcia meeting Adrian Granados, so that could steal some thunder from the MSG lace-ups. However it plays out, I dare say I will appreciate the reactions from the living legend. For the record, I told him on Tuesday about a Twitter-er who declared Arum an American treasure, who transcended sports, a real-deal living legend. “I like the ‘living part,”’ he cracked to me, chuckling…and he then segued perfectly onto what’s next for his other ultra A side pugilist, Vasiliy Lomachenko.

There will be no more Bobs.

Listen to Woods’ podcast here. Showtime analyst Al Bernstein shares about the good news, how he beat back cancer.