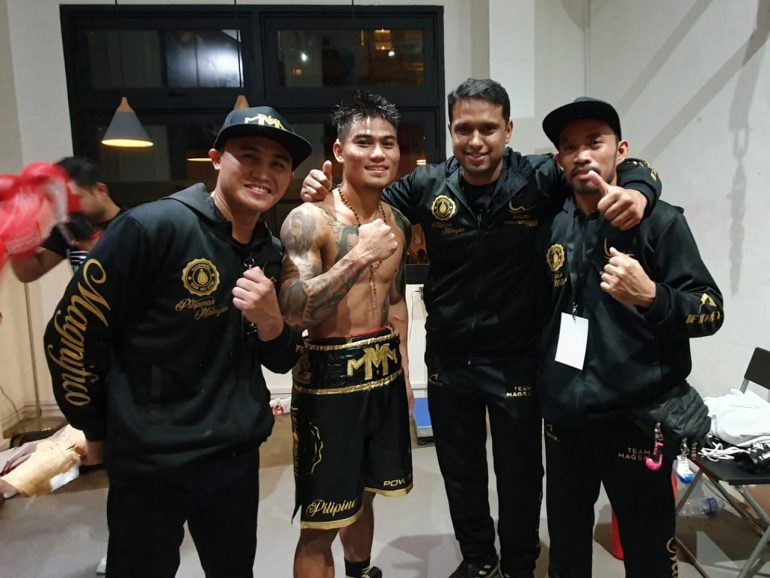 After a 17-month hiatus heavy-handed featherweight Mark Magsayo returned with a fourth round stoppage over Erick Deztroyer at The Ring Boxing Community, Singapore on Friday.

Magsayo (19-0, 14 knockouts) fought behind his jab and employed his withering body attack from the early stages. He had Deztroyer (12-5-1, 3 KOs) going backwards after feeling the considerable power.

Once the popular 23-year-old got his eye locked in, the body shots he landed were able to take out the brave Indonesian fighter at 2:00 of the fourth round.

This was a good return for one of the brightest young talents in Asia after a testing period.

“A lot of things happened when I did not fight for a year,” Magsayo told The Ring. “I learned a lot of new things not only in training but in life, I learned how to cope with these changes and I am thankful to God that there are people who are really willing to help me. It was a very hard time for me but it’s good to see the people who will stick with me in hard times.

“Now I am really happy and thankful deep in my heart for my manager Sir Vikram [Sivapragasam] and promoter Sir Cameron [Dunkin of Now Promotions] that I fought today.

“I am happy with my performance because I tried the things that I’ve been doing in training. I tested that my stamina and it is better than before. I got a little bit excited on the first and second round but the third and fourth I tried to relax and got the chance for a good body shot. [My] opponent was tough and strong puncher too so I did not underestimate him. I respect him. I missed fighting inside the ring.”

His manager Sivapragasam was glad to get his young fighter back in the ring after an extended time away and expects him to thrive in the 126-pound division.

“Mark had an excellent day at work,” said the Malaysian businessman. “He got much needed rounds. He will take over the division, it’s just a matter of time.”