Christina Hammer could present some problems for Claressa Shields 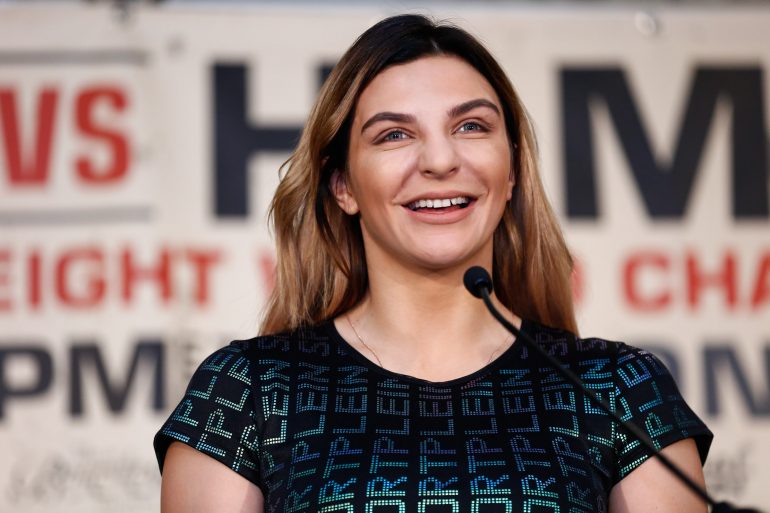 Christina Hammer dismisses it—and you get the sense that she genuinely believes WBA/WBC/IBF middleweight Claressa Shields is no real match for her.

Hammer – who calls Dortmund, Germany home, though is originally from Novodolinsky, Kazakhstan – can sling words just as biting and abrasive as Shields.

And Hammer (24-0, 11 KOs) is just as confidently effusive as her counterpart.

“I know everything about her, I’ve watched a lot of her fights and I was at a few of her fights ringside,” Hammer said. “I know I have the skills to beat her, and my goal is to beat her badly. I’m looking forward to this fight and I’m prepared. I want to be undisputed champion and it’s a real tough fight and I’m ready for this.”

When Hammer was posed the same question as Shields, what about your opponent concerns you, their answers were almost identical.

“Nothing makes me worried about her,” Hammer said.

A day prior, Shields answered “None!” when asked what type of problems Hammer poses.

(READ: Claressa Shields has never been afraid to speak her mind or back up her talk)

“I checked everything with my coach and I have my game plan, using my reach, using my footwork,” Hammer said.

Hammer, 28, does have physical advantages. She’s 5-foot-11 to Shields’ 5-8. She possesses a 71-inch reach to Shields’ 68-inch reach—and Hammer has been doing it longer than Shields, turning pro in 2009 when Shields was 14 and still honing her craft in Flint, Michigan. Hammer has been the reigning WBO middleweight champion since October 2010.

Experience and her technical, Hammer feels, are distinct advantages.

Another is her ability, she feels, of getting into Shields’ head.

“Yes, I think so,” Hammer said with a playful snicker. “I know how to provoke her and drive her crazy. I have to box her and use my technical skills, and my experience and round-for-round I have to be careful. I’m taller than her and my arms are longer, plus I have 24 fights. I’ve learned a lot from every fight, and I’m growing and growing from fight to fight. Distance and movement is a big deal for me, because I’ll know how to handle this.”

Hammer said she sparred with U.S. Olympian Shadasia Green, who is as close to Shields.

“Green is bigger and has much more power than (Shields) and we sparred a lot in Austria and I think I was confident with her,” said Hammer, who will be fighting for the second time in U.S.

Hammer said she’s not worried about the venue. She says she trusts the judges, but the fight will be up to her. Hammer knows the history at stake—winning the inaugural Ring championship belt.

“This is such an honor for me and in the past, I dreamed of getting all of these belts,” Hammer said. “This is a dream come true. It’s a great opportunity for women’s boxing. I’ll have to keep my distance and use my jab. I’ll have to move and react to everything. The experience is on my side.”