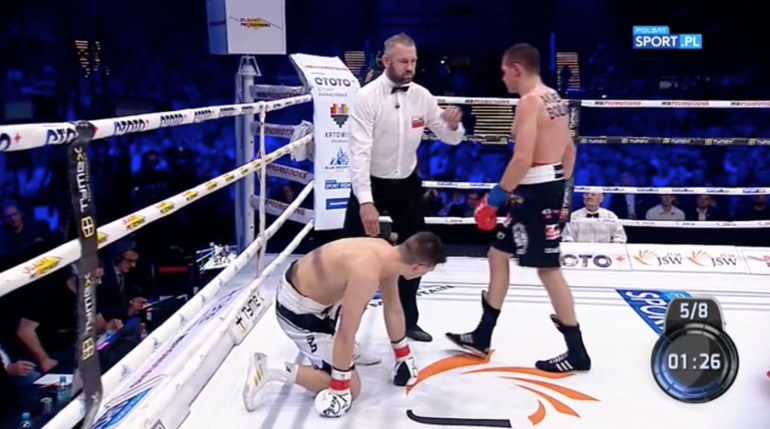 If only their contracts had bonuses for knockdowns.

Middleweights Patryk Szymanski and Robert Talarek would be as well compensated as they deserved to be for their rock’em, sock ’em rumble which unfolded in Poland on Saturday.

It probably wasn’t because the canvas was slippery, it looked to be that the two pugs were swinging for the fences and defense wasn’t priority one. Or two…

The two Poles went back and forth and totaled ten knockdowns between them in their middleweight tango, set for eight or less.

The 35 year old Talarek went down in the first (1st knockdown), off a quick counter right… and Szymanski thought he’d maybe get an early stop. Under two minutes to go, another knockdown (2) by the 25 year old Szymanski. The right hand was spot on.

Then, Szymanski hit the deck (3) in round two. Flurrying plus a push did it.  His right hand then sent Talarek to the mat (4), with 42 seconds to go in the second. And then number (5) followed; a right sent a borderline out of it Talarek to the mat. He got up, though, and kept battling, with about five seconds left in the round.

All TEN knockdowns from the five-round brawl between Patryk Szymanski and Robert Talarek earlier today in Poland. Talarek (24-13-2, 16KOs) came back to win by TKO, and Szymanski (19-2, 10KOs) announced his retirement right after pic.twitter.com/G7h9I8ip8K

To round three; a fatigued Szymanski went to his knees, but beat the count (6), with 26 seconds remaining.  He went to his knees again (7) as Talarek, who’d lost step-ups to Liam Smith and John Ryder, took the momentum at the very end of the third.

And in round four, Szymanski went to his knees, yet again (8). But beat the count, after being hammered back to the ropes.

Talarek’s flurry at 51 seconds to go in the fourth gave him another extra point (9), when a weary Szymanski took a knee.

To round five…down goes Szymanski (9), off a right hand.  And that was all she wrote, the ref said no mas, though he beat the count. The end came at 1:45 of the fifth, though this epic tussle will live on till end of days for everyone in the joint.

A gold star goes to ref Robert Gortat, for all the counting he did, and what looked like a solid job in assessing ability to continue for two weary and stubborn athletes.

Boxrec tells us that Szymasnki went to 19-2 (10 knockouts) and Talarek to 24-13-2 (16 KOs). On paper, this was supposed to be a get back in the W lane outing for Szymasnki, who’d been stopped in round four by Fouad Ell Massoudi in Poland back in October 2018. But Boxrec doesn’t do this one justice; yes, technique went out the window, but that was more than made up for with the display of willpower from both men, who attended the MB Promotions show topped by a Robert Parzeczewski-Dmitrii Chudinov super middleweight main event.

Szymanski and Talarek violently collided and it was their faceoff which won’t be forgotten by one soul who attended the jaw dropper.