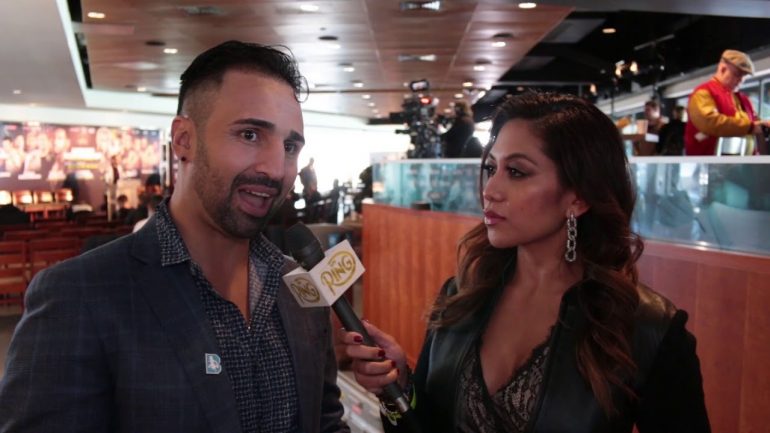 Things got spicy and dicey at a media workout touting the Saturday Bare Knuckle Fighting Championship card, which will unfold on pay-per-view and is topped by UFC vet Artem Lobov, a best bud of the notorious former two-division champion Conor McGregor.

Lobov will be fighting Jason Knight but it is assumed he is the favorite and should get the win in the featured bout, held in Biloxi, Mississippi and is the fifth event run by promoter David Feldman.

It is Feldman’s wish to match Lobov with his new signee, the fighting pride of Bensonhurst, Brooklyn, Showtime analyst Paul Malignaggi, a former 140 and 147-pound titlist.

Paulie hung up the gloves after losing to Sam Eggington in March 2017, but the call of the wild, the urge to throw hands, stave off aging and test ones self against younger but not necessarily better men returned. Last month, Malignaggi announced a move that, if it had been trotted out yesterday, would have been dismissed as an obvious April Fools prank.

Malignaggi, age 38, has a 36-8 (with 7 knockouts) ring record and will fight on a card June 22, according to Feldman, who came to Everlast and visited the “Talkbox” podcast before the media event. This event will lilely go down in the New England area.

Lobov, 13-15-1 in mixed martial arts, slammed Paulie hard in studio at Everlast, calling him chubby and broke and said he is looking forward to beating Knight and then beating Paulie worse in June.

That vibe continued at Mendez Boxing Gym, on East 26th Streer in New York City, as the two men jawed. Expletives were traded and then Paulie delivered a left-handed slap, not that hard, to Lobov’s cheek. Handlers jumped in between the two before things could escalate from there and, of course, cell phone cameras caught the beef from multiple angles.

I am told you got a sly cheap shot in, I thought that was a mosquito!You know you get killed in a minute if the people werent there, You will be paying with your broken jaw! ?????

“Without disrespecting Jason Knight because we’ll see what happens Saturday but I think everyone here would like to see Malignaggi vs. Lobov. I see that it’s picking up traction and fans in general are talking about it,” said Malignaggi at Mendez, about the tiff.

“When I get Lobov in the ring, the goal is not just to win. I have to really excel and show something more. The goal would be to hurt him bad.

The boxer/analyst-turned-BKB practioner spoke on his return to the fighting life. “Being in the gym every day gets me excited. In that way, I feel mentally reborn. I’m sure there will be tough days but that’s par for the course. I think mentally you can find motivation that will spur you on to chase certain goals.

“I started talking to David Feldman first about being involved on the broadcast aspect of BKFC but then he threw out numbers for me to fight that got my attention,” he explained, when asked why he chose to get off the hammock. “Once we got past that first part of the conversation, things started moving along and here we are.”

Here we are, indeed. The slap did the publicity job, with the video quickly going viral. “Look, when you have guys like Malignaggi and Lobov in the same room anything can happen. I was surprised Paulie got physical but these things happen,” said Feldman. “I think Artem has a tough task on Saturday fighting Jason Knight; he has to get by him first. If he does, Artem and Paulie will be a promoter’s dream. All in all, with these kind of guys we have, it shows how quickly Bare Knuckle Fighting is growing.”

The 32-year-old Lobov, who lost three straight to end his UFC run in October 2018, had his say, regarding the Brooklynite. “Let’s be honest; Paulie doesn’t want to fight me on the street because he knows I’d tear him apart in seconds. But I want to prove myself in the boxing ring; that’s why I’m doing this. I want Paulie safe until the day I can finally put my hands on him,” Lobov said. “This is the only chance he has to get a shot in on me. When we do get to fight, he won’t get a hand on me; I guarantee that. Paulie was always the fight I wanted. It’s ‘Night, night’ for Jason Knight this Saturday, then it’s on to Paulie. That’s the only fight I want. He deserves to get slapped around. I love the bare knuckle training. This is my game. I love the stand-up fighting. My approach is that if you want to be a good boxer, you have to box a lot. I went into all of the best gyms in Ireland and got great sparring.”

I asked Lobov at Everlast if he’s talked to McGregor about doing BKB and he said he hasn’t exactly broached the subject with him but didn’t close the door. Hardcore fight fans know that Malignaggi and McGregor have a rivalry stemming from their sparring, heading toward the Floyd Mayweather Jr. vs. McGregor event in August 2017. Lobov said he was there and Paulie got the worst of it.

Malignaggi bitterly disputes that and would like to prove to all in a boxing ring that he’s the superior pugilist to McGregor. However first, he’d have to get past Lobov and scrape off what might be a heavy coat of ring rust. In other words, we should remember that this is the boxing game, the fighting game, and the theater of the unexpected and planning too far in advance is a fool’s play.