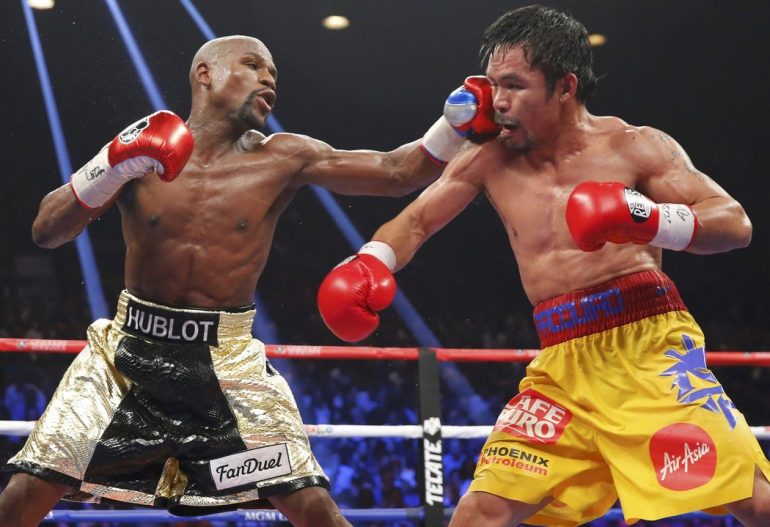 If this was a joke, someone forgot to yell belated April Fool’s Day.

Floyd Mayweather Jr., who has spent much of his time trotting the globe since officially retiring as a fighter, made an abrupt stop in the Philippines. There he played beach volleyball in Boracay, then traveled to Metro Manila for a facial treatment from a celebrity dermatologist, and agreed to face-off with his long-time rival Manny Pacquiao…in a basketball game.

The announcement was made at the Resorts World Manila casino on Tuesday, at a press conference alongside the doctor, Vicki Belo. Mayweather was several hours late to the event, and was reportedly doing some shopping at the nearby Greenbelt and Glorietta malls, before making his arrival.

The two 40-plus fighters, who met in a record-setting fight in 2015 with Mayweather emerging victorious by unanimous decision, have met briefly at NBA games in recent months, and Mayweather was ringside when Pacquiao defeated Adrien Broner on January 19 in Las Vegas in his debut under Premier Boxing Champions.

The meet-ups have built speculation that the two could once again compete in another boxing fight, but Mayweather denied he’d be interested in facing his first pro boxer in years.

“You don’t have to bank on a second time. I got the job done right the first time. Always get it done right,” said Mayweather (50-0, 27 knockouts) in an interview with CNN Philippines. Mayweather last fought in a pro bout in 2017, when he stopped MMA fighter/boxing debutant Conor McGregor, but was in the ring on New Year’s Eve to blast out the much smaller kick boxer Tenshin Nasukawa in Japan.

Pacquiao (61-7-2, 39 KOs), a sitting senator who has dabbled in pro basketball in the Philippines, has tried to goad Mayweather into a second meeting through leaked quotes to the media. Pacquiao was ringside in Texas last month when IBF welterweight titleholder Errol Spence Jr. defeated Mikey Garcia by one-sided decision, but has been linked to talks to face WBA titleholder Keith Thurman.

Mayweather said that, while they’re not friends, he likes Pacquiao as a fighter. He was more passionate in his praise of his country.

“The country that he comes from is a great country. The Philippines is a great place, beautiful people, I love the atmosphere and I look forward to coming back again,” said Mayweather.

As of this story’s publication, no video has emerged of Pacquiao and Mayweather on the court.