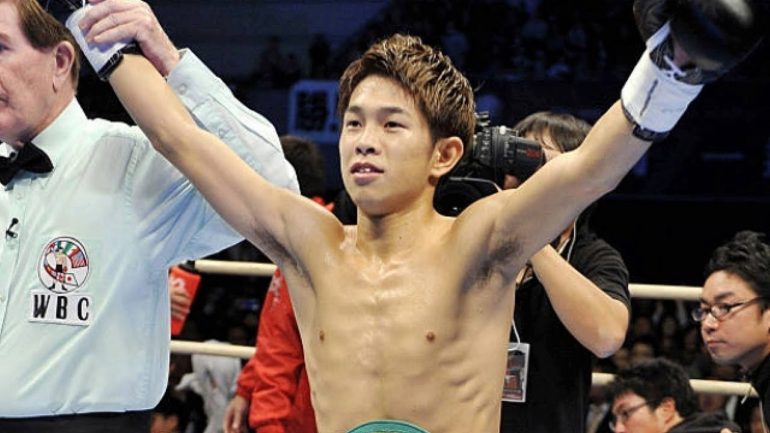 Kazuto Ioka will get his second chance at becoming the first Japanese four-division champion when he again attempts to capture the vacant WBO junior bantamweight title against Aston Palicte on June 19th in Chiba, Japan at the Makuhari Messe Convention Center.

Guy Taylor, matchmaker for Roy Jones Jr. Promotions, which represents Palicte, tells The Ring that “contracts are not done” before adding they’re “close though” to finalizing.

The news that the fight was imminent has been known for some time in boxing circles around Japan but as is custom, had been kept under wraps until a time that is considered appropriate for those promoting the fight. The information was leaked somewhere and released on Twitter from a Venezuelan fight account.

Currently, sources in Japan are continuing to hold off from reporting the news until contracts are signed, though location details are already in place, and the news of Ioka signing locally was the first domino to fall in the line of announcements set to finalize the deal.

Ioka (23-2, 13 knockouts) will be making his return to Japan for the first time since 2017. His license had been suspended as he no longer officially belonged to a gym which is required by the JBC. Previously he had belonged to his father’s gym in Osaka. The gym was closed after the elder Ioka ran into tax troubles with the authorities.

Reason Gym in Saitama is officially the new home for Kazuto Ioka. Recently Ioka had been training at the Tokyo gym of former WBA junior lightweight champion Takashi Uchiyama. Both of Ioka’s last two fights have taken place abroad. The news of the Reason Gym signing Ioka, along with the obvious desire for the move to allow Ioka to fight at home again was first reported by Yahoo JP yesterday.

Aston Palicte (25-2-1, 21 KOs) fought to a draw with countryman Donnie Nietes last September in his first attempt at the vacant WBO junior flyweight title. Ioka was also featured on that fight card and won by unanimous decision against McWilliams Arroyo, ending a nearly 18-month retirement.

The WBO approved a New Year’s Eve title fight between Nietes and Ioka, with Palicte being pushed to the sidelines. Nietes would win the fight by split decision and later vacated the title rather than defend against Palicte, who knocked out previously undefeated Jose Martinez in the second round in his last time out.

The fight venue is a 45-minute train ride from downtown Tokyo. Expect a swath of Osaka fans to join in on the action as their hometown hero Ioka is extremely popular there as he is in the capital. Makuhari Messe can hold about 9,000 fans.

Nick Skok can be reached on Twitter at @NoSparring