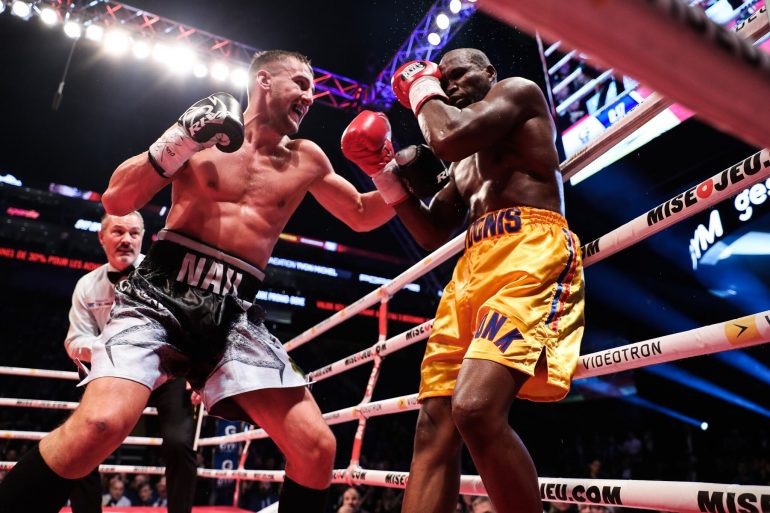 Oleksandr Gvozdyk (left) moves in on a stunned Adonis Stevenson to land his finishing punches. Photo by Amanda Westcott-SHOWTIME
28
Mar
by Joseph Santoliquito

PHILADELPHIA — It doesn’t plague his thoughts and existence like it has other fighters in the past. WBC light heavyweight champion Oleksandr Gvozdyk has moved forward. He is able to sleep at night. He’s able to train. He’s able to conceptualize his next steps as a defending world champ without the specter of Adonis Stevenson hovering over his every move.

Hall of Fame fighter Ray Mancini was never the same after beating South Korean Duk Koo Kim, who died shortly after their fight in November 1981. The great Sugar Ray Robinson found it “very trying” to overcome the death of Jimmy Doyle, who died shortly after Robinson stopped him in the eighth round of Robinson’s first welterweight title defense in June 1947. 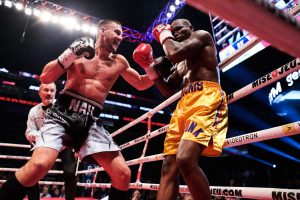 Oleksandr Gvozdyk (left) moves in on a stunned Adonis Stevenson to land his finishing punches. Photo by Amanda Westcott-SHOWTIME

Gvozdyk stopped Stevenson in the 11th round of their title fight on December 1, 2018, at the Centre Videotron, in Quebec City, Canada. It was a brutal back-and-forth fight, resulting in Stevenson suffering a catastrophic brain injury that impaired him for months.

Gvozdyk, the Ukrainian light heavyweight bronze medalist at the 2012 London Olympics, says he still prays for Stevenson, still has him in his thoughts.

“There’s no one to blame here, it’s boxing and I’m happy to hear and see that Stevenson is doing much better,” said Gvozdyk, 31, who speaks very good English and is trained by the legendary Teddy Atlas. “I’m glad that Adonis is okay. I didn’t even know what happened to him until the next morning, when we heard something bad happen.

“I don’t want to be known as a killer. We’re all fighters and people like to blame someone. People blamed the referee (Michael Griffin). Some people said it was a bad stoppage. It wasn’t. Stevenson hits really, really hard. He’s a great puncher. He hurt me in round 10. I was the one in trouble. He’s a tough fighter and a hard puncher. It’s the bad side of boxing. We all put our lives on the line. It’s the speck of dirt in a bowl of honey.

Gvozdyk, who arrived in the U.S. in 2014, appears to be in great shape. Atlas likes his work ethic and determination. The 62-year-old wouldn’t be working with him otherwise. 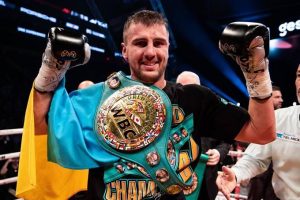 “Oleksandr has learned a lot, he’s a bright kid, he asks a lot of questions, because, listen, I wasn’t going to come out of retirement and train another fighter again,” said Atlas, one of boxing’s genuine, straight-shooting guys. “My children spoke to me about it and asked me to give it a thought. I flew out to Oxnard, California, for two days and met with him.”

“I didn’t want to come back in this business unless it was with someone I could be happy being around with,” Atlas said.

Atlas also stressed, like Gvozdyk, that they’re pleased to hear Stevenson is on the road to recovering. The noted trainer said he personally prays for Stevenson every night and the fight was something both spoke about after they heard the news Stevenson was hospitalized.

“Privately, we prayed for me and spoke about it,” Atlas said. “Gvozdyk understand the profession he is in. We’re saddened that it happened, but we also both understand the business that we’re in. We do understand that what happened to Stevenson is a possibility of happening on both sides, and Oleksandr, don’t forget, was in some trouble himself in that fight.

Gvozdyk and Atlas had eight weeks to work with each other for Stevenson. This training camp is much more extensive.

“Ngumbu is older, he’s 37 and this is it for him, his first and last chance to become a champion,” Gvozdyk said. “Anyone like that is dangerous. His losses have come against different fighters and he has an awkward style. He’s someone I won’t underestimate, because once you do that, you get your ass kicked.

“He throws punches from everywhere. It will be a fun fight for everyone.”