Charlie Edwards looks to Moruti Mthalane unification fight: I know I would beat him 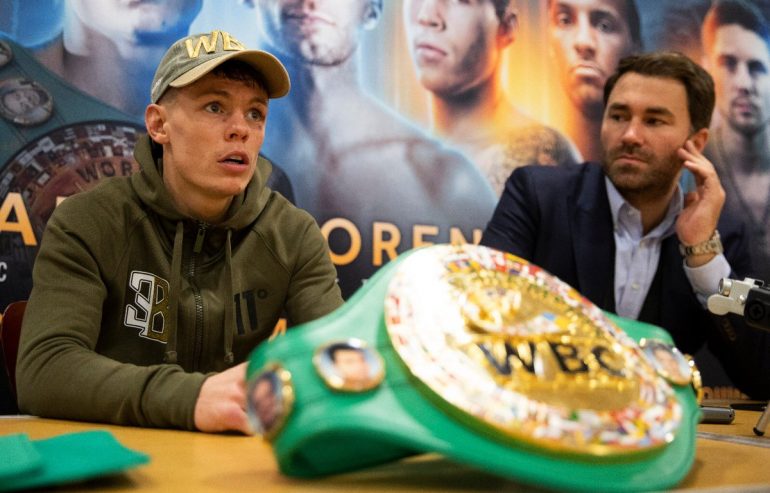 “July, if the hands are well,” said Eddie Hearn, offering both a timeline for a unification battle with Moruti Mthalane, and a caveat to its proposal.

Edwards, who made his first defense of his WBC flyweight title last Saturday against Angel Moreno, said the hands are feeling well, the result of cryotherapy treatments which he says keeps the swelling down. It was a legitimate concern, given the regularity with which he landed throughout the night against the game but outgunned Spaniard en route to a 120-107 sweep on all three scorecards. Moreno, who had previously been a sparring partner of Edwards, never stopped coming, providing the canvas on which Edwards painted a masterpiece.

“I feel I’ve gone up 10 folds as a fighter. I feel like I’ve got more confidence, my boxing IQ’s gone up,” said Edwards of his progress since becoming champion last December, when he outboxed Cristofer Rosales to lift the belt.

“For me it’s about becoming a great and pushing the boundaries. Look at the likes of Manny Pacquiao, look at Floyd Mayweather, they keep bettering themselves all the time. And that’s the mindset you’ve got to have.”

The move to unify with an accomplished veteran like IBF flyweight titleholder Mthalane may seem quick for the 26-year-old, who moved his record to 15-1 (6 knockouts), but he sees it as the completion of a plan set out a year ago when he was planning his second run at a world title. Edwards actually traveled to Malaysia, courtesy of his sponsor GoPak, to be in the arena when Mthalane defeated Muhammad Waseem last July to recapture the belt he’d never lost in the ring.

“We watched him firsthand up close and personal, and from that day I knew that I would beat him,” said Edwards. “I’ve seen his style and it’s a fight that I really, really want in July and I really believe it’ll come through.”

Mthalane, who like Edwards is also managed by MTK Global, had been in talks to make his first defense against Edwards, but opted to face Japanese brawler Masahiro Sakamoto instead in Macau, stopping him in ten.

Mthalane (37-2, 25 KOs) had also expressed interest in that matchup, telling The Ring in January: “I’ll be very happy if me and Charlie Edwards can fight for a unification before the end of the year.” Mthalane’s trainer Colin Nathan had said Mthalane-Edwards “could potentially be a classic.”

An MTK official declined to comment until after Mthalane deals with his mandatory defense against Masayuki Kuroda (30-7-3, 16 KOs) on May 13 in Tokyo.

While much of the talk was about bringing two of the titles together, much was also speculated about a potential all-UK showdown between Edwards and Andrew Selby, the top-rated Welshman who was facing Julio Cesar Martinez in an eliminator later that night in Mexico. That was, until Martinez (14-1, 11 KOs) ended that talk for the time being by sinking Selby with a left hook to the body in five rounds, and becoming the new top challenger to the WBC belt.

“I haven’t seen it, I watched obviously the stoppage Selby took, the body shot, he got counted out on,” Edwards said Monday night, before contrasting it with the situation of Paddy Barnes, another former Olympian who had spoken about facing Edwards before losing in surprise fashion on St. Patrick’s Day.

“Obviously I was focused on Saturday night, then after the fight everyone was asking about the Selby fight but in my head it’s the same situation as that Paddy Barnes thing. You can’t think about your next fight until you get through your first fight. Maybe [Selby] just overlooked him a little bit and was looking towards me too much, but like I said it’s irrelevant, I’m the champion and whoever my mandatory is is my mandatory.”

The highlight of Edwards’ night may not have been the victory, but what came afterward. WBC president Mauricio Sulaiman, who came to London for the fight, surprised Edwards and his mother Terry with a championship belt of her own backstage in the dressing room.

Edwards had cited his mother, who has been wheelchair-bound since suffering a series of strokes, as his inspiration to become champion. Presenting her with the belt after beating Rosales was the fulfillment of a promise he had made to her before his first title attempt in 2016 against John Riel Casimero.

“It was an unbelievable statement from Mauricio. I can’t stress and thank that guy enough. It’s weird, me and him had a soul connection, that’s the first time I’ve met but I feel like I’ve known him like I’ve met him previously,” said Edwards.

“That made her the happiest woman in the world that night. When she got home my sister sent me a picture of her, she had tears of joy streaming down her face with a big smile in them. For me that is very much priceless.”