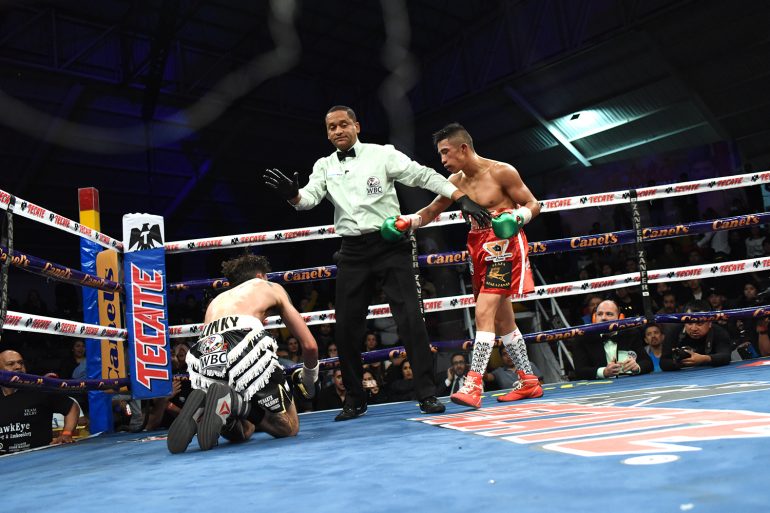 Andrew Selby was seemingly on the path to face WBC flyweight titleholder Charlie Edwards in an all-British showdown. That was, until he ran into Julio Cesar Martinez.

The unheralded Mexican banger threw a fork into those plans and established himself as the next likely mandatory for one of the major belts at 112 pounds with a fifth round knockout win on Saturday night at Centro de Espectáculos del Recinto Ferial in Metepec, Mexico.

The time of stoppage was 57 seconds as Martinez (14-1, 11 knockouts) caught up to the lanky switch hitter with his heavier blows. As Selby reached in to throw a straight right, Martinez countered back with two uppercuts which provided cover to a left hook which Selby never saw coming. Selby dropped to all fours in visible pain before taking the full count on a knee.

Heading into the fight Selby, 30, had been ranked no. 1 by the WBC and no. 4 by The Ring – one spot ahead of Edwards and just behind the other three belt holders – while Martinez, 24, was rated no. 2 by the WBC and unrated by The Ring.

Despite having never won a belt, the Welshman was held in high regard because of his win over world champion-to-be Cristofer Rosales (another fight he had been knocked down in) and his deep amateur background, which included a trip to the 2012 Olympics, plus gold medals at the 2011 and 2013 European Championships, as well as a silver at the 2011 World Championships and a bronze at the 2013 edition.

Edwards (15-1, 6 KOs) had defended his title for the first time earlier in the day, shutting out the determined Angel Moreno in London. In the immediate aftermath, promoter Eddie Hearn mentioned the possibility of Edwards facing the IBF titleholder Moruti Mthalane, who is also managed by MTK Global, in June should his hands be unscathed.

Though Edwards was asked about virtually every other major player at 112 pounds, Martinez’s name wasn’t one that he had been asked about.

With the win, Martinez has promised he’ll be a part of the conversation.