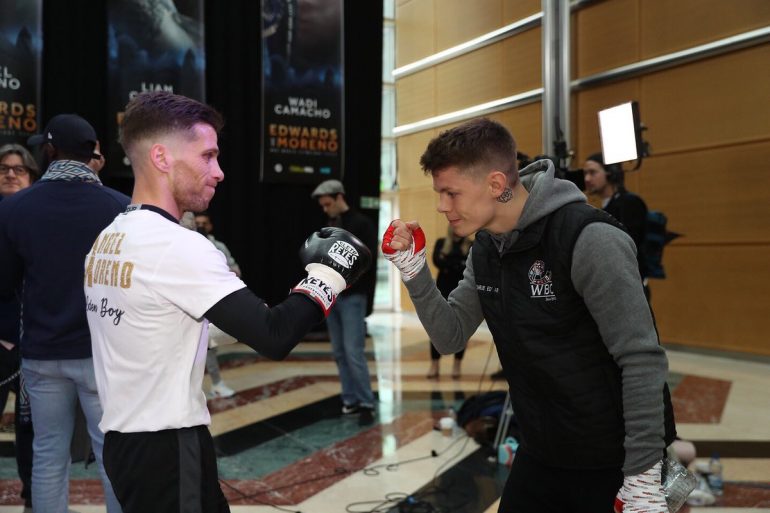 Charlie Edwards (R) shows respect to his challenger Angel Moreno, with whom he'd shared the ring with in sparring. Photo from Matchroom Boxing/Twitter
21
Mar
by Ryan Songalia

Before his last fight, Charlie Edwards, an adherent to the Law of Attraction, covered his locker room with a banner that read “I am a world champion” plus “And the new” with the WBC championship belt, even before he entered the ring to face Cristofer Rosales.

Now, about three months after defeating the highly-regarded belt holder by unanimous decision, Edwards has a new banner printed out that reads “And still”, as he intends to speak a victory into existence in his first defense of the WBC flyweight belt this Saturday against Angel Moreno.

Even if he went to the ring with the mindset of being the defending champion instead of the challenger, Edwards admits it’s been a major adjustment having the belt around his waist. There are people to meet and greater demands on his time, but the 26-year-old Edwards has learned to cope.

“I was getting a lot of media attention, a lot of people in public restaurants coming up speaking to me. I’m a humble guy so I always give everyone my time and want to speak to everyone and it was just a matter of getting the balance right with home life with the missus and making time for the media and making time for the fans. It’s been a very, very valuable few months of learning,” said Edwards (14-1, 6 knockouts) of Surrey, just south of London.

Last time, Edwards was on the undercard of the Dillian Whyte vs. Dereck Chisora grudge match, which was televised in the U.S. by Showtime minus the rest of the card. Now, Edwards is the headliner at the Copper Box Arena in London, with his fight being broadcasted on DAZN in America, and on Sky Sports in the UK.

Moreno (19-2-2, 6 KOs), the no. 14 contender from Madrid, Spain, has lost in the only two times he has left his home country, most notably a 2015 decision loss to current WBA flyweight titleholder Artem Dalakian. He has the experience of being in the ring for 28 rounds with Edwards back in 2016, before Edwards’ unsuccessful challenge of John Riel Casimero for the IBF flyweight belt.

“We shared some great rounds together so it’s gonna heat up nicely,” said Edwards of their work together. “I’ve got full respect for him, I’ve got full focus on him for Saturday night. He’s not gonna be any pushover but I’m very confident I can win and look very good in doing so.” 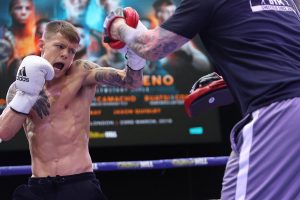 Grant Smith, who trains Edwards out of his Steel City Boxing Club in Sheffield, England, says he was approached by Edwards’ management MTK Global, plus Edwards’ promoter Matchroom Boxing, with a slew of opponents. When the list of available challengers was narrowed down to Moreno, Smith approved it, only to find out later that the two had history together.

“I had a quick look at him and said yes that’s fine, he’s a tricky fighter, he could make some people look a bit style, he’s a bit awkward. I just got on to Charlie and said we’ve got Angel Moreno…he said ‘I’ve sparred him!,’” said Smith. “I said you’re joking…well, you’ve got him now.”

Edwards is remaining active, and the Moreno fight will provide him with some international exposure on a growing streaming platform, but Edwards says it’ll be fights against other titleholders that’ll truly define his legacy as champion.

Though the 112-pound division is still limited in its media mileage to local markets and viewership from hardcore fans, the weight class is full of talent. There’s the aforementioned Dalakian, based out of Ukraine, who has made two defenses of his belt. There’s also the WBO titleholder Kosei Tanaka, a champion previously at 105 and 108, who has solidified himself as the king of Japanese flyweights with successive wins over Sho Kimura and Ryoichi Taguchi. And then there’s IBF titleholder Moruti Mthalane, whom Edwards’ team had pursued before making the fight with Rosales instead.

Promoter Eddie Hearn tells Boxing Social that Moreno is “a solid first defense” before adding “really the plan is to look good and try to unify the division in 2019.”

Edwards is rated no. 5 by The Ring, behind the other three titleholders, plus Andrew Selby. Smith feels that Mthalane, who is also represented by MTK, would be the easiest unification fight to make.

“I’d like Moruti, Dalakian, Tanaka, we’d box them all,” said Smith, who has trained Edwards for just over a year.

“I’m not just saying it because I’m his coach: I do think he’s the number one (in the division).”

Edwards will have a chance to possibly convince a few others to adopt his trainer’s opinion.

“I’m hungrier than ever,” said Edwards. “I’m nowhere near the finished article. I’m loving training as a champion, I know I’ve got loads of people on my case wanting my title so all it has done is make me hungrier.”