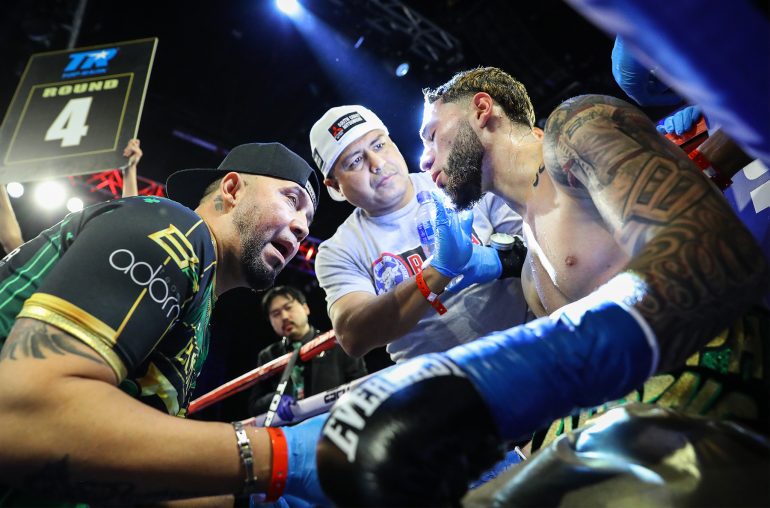 NEW YORK — Less than 24 hours later, after one of the most difficult nights of his boxing life, Robert Garcia was back in his old spot, leaning forward, his right arm resting atop the back of a folding chair, cap on backwards, peering intensely at what was unfolding a few feet in front of him like a surgeon examining a patient.

On Sunday, Garcia somehow, someway found his way to the Hulu Theater at Madison Square Garden in New York City after watching his heart and soul, his younger brother, Mikey, take a beating by the supremely talented Errol Spence Jr. at AT&T Stadium in Arlington, Texas, Saturday night.

Yet, there was Robert Garcia, seated ringside again, working a fighter’s corner. In Robert’s case on St. Patrick’s Day, on the Michael Conlan-Ruben Hernandez undercard, it was a pair of lightweights, Joseph Adorno and John Bauza, and super lightweight Josue Vargas.

Of course, all three won.

And of course, they all had the full, unrelenting attention of their trainer—Robert Garcia.

Garcia caught a 6 a.m. flight Sunday morning out of Dallas-Fort Worth airport, landed in New York’s LaGuardia Airport at 11 a.m., checked into the Stewart Hotel in Manhattan at 11:30, showered, and walked over to the Hulu Theater arriving by 1 p.m.

In the interim, he subsisted off a cup of coffee and two hours of sleep on the plane—after working the corner of six fighters the previous night in Texas.

What keeps Robert up and going?

“That’s easy, I love what I do, and I couldn’t let my guys down, regardless of what happened the night before,” Robert said. “Boxing is my passion. I love what I do. I’ve been to tournaments, and traveled the world, and I’ve had some crazy schedules in my boxing life, but I’ve never done anything like this.

“I’ll be honest about the other night, knowing my brother and being with him his whole boxing career, knowing the way he acts and thinks about boxing, it wasn’t that painful.

“My brother is a businessman. A loss with some fighters will tear them apart. Not Mikey. Not with my brother. Around the ninth round, he got hit more than Mikey was supposed, and my father (Eduardo) wanted me to stop it.

“But when I walked into the ring, I told Mikey that I was going to stop it. Mikey stopped me. He told me, ‘I got hit, but I never got hurt.’ He wanted one more round. I know my brother, we just know the way he is.

“We tried for 12 rounds against maybe the best pound-for-pound fighter in the world and we were satisfied. Mikey didn’t have to go to the hospital. He got hit, but it wasn’t to a point where it caused any damage. He felt one body shot. That’s what he told us after the fight.”

Robert got back to his hotel room in Arlington, Texas, at 2 a.m. He didn’t want to risk missing his 6 a.m. flight, so he showered and packed for the airport.

“These guys that fought today are my fighters and I couldn’t let them down,” Robert said. “To have me here is something special. I didn’t have to be here (in New York). If anyone told me to stay home, I would still have come here.

“These are my fighters. These are my guys, my kids. They’re family. I slept two hours on the plane and I’ll go right to sleep once I get back to the hotel.”

Accompanying Robert on the journey was Dr. Roger Anderson, who goes way back with Robert and the whole Garcia family.

“Robert is amazing,” said Dr. Anderson, who administered to Robert’s cuts when he was fighting. “I know Robert and the Garcia family very well and it was very difficult to see the loss (Saturday night).

“It’s never easy to see anyone lose. Mikey isn’t just Robert’s brother, he’s Robert’s student, it’s more than that. Robert has done extremely well with this. As a trainer, Robert is as good as there is. He knows how to talk to people and he genuinely cares and will tell his fighters the truth.

“To see Mikey get off at all, that was tough to see. Mikey wasn’t used to fighting at that weight and Spence is very, very good. You can’t take that away from Spence. But Mikey is a very, very special guy. Robert certainly is, too.

“The Garcias are good people.”

Adorno, who is 12-0, with 10 knockouts, wasn’t surprised his trainer made the trip.

In fact, it was typical.

“Robert is committed to this game and committed to his boxers,” Adorno said. “Robert makes people feel special. If he didn’t make it, I would understand. As soon as Mikey’s fight was done, Robert went right to the airport, and Robert keeps pushing me”

That’s what a world-class trainer does—always in the corner of his fighter no matter the obstacles.