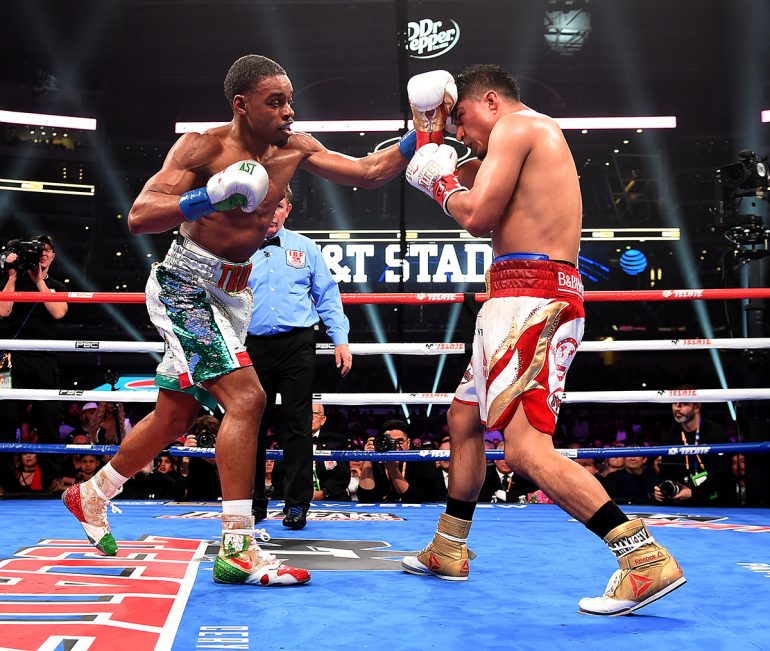 ARLINGTON, Texas — An absolutely electric crowd of 47,525 rowdy fans packed AT&T Stadium tonight as Mikey Garcia challenged Errol Spence Jr. for his IBF welterweight title. Garcia walked to the ring with a mariachi band and traditional Mexican dancers; the Mexican-American fans ate it up. Local fighter Spence walked to the ring to pyrotechnics and fire; the Dallas fans exploded.

Spence, a southpaw, was popping a stiff jab in the opening round while Garcia appeared to be logging information into his boxing computer.  A hard left hand to Garcia’s body halfway through appeared to be the best punch of the round. Spence also got in a solid left hand upstairs later on. It was enough for the local fighter to clearly take the first.

It was a closer second round as both fighters spent most of the time in the center of the ring. Spence started well, but Mikey had moments late that may have been enough to steal it in the eyes of the judges. It felt like a possible swing round. Had Garcia found something?

Spence appeared to do the better work in the third, landing a solid left to Garcia’s head to take the round just before the bell rang. The fourth was fairly decisive, as it appeared Spence was able to do what he wanted for the most part. Mikey got in some nice counters to the body but had a mouse under his left eye by the end of the round. Garcia came out faster in the fifth, sensing he had to get his opponent’s respect. Spence weathered the storm and got back to working behind his jab, appearing to do enough to once again take the round. 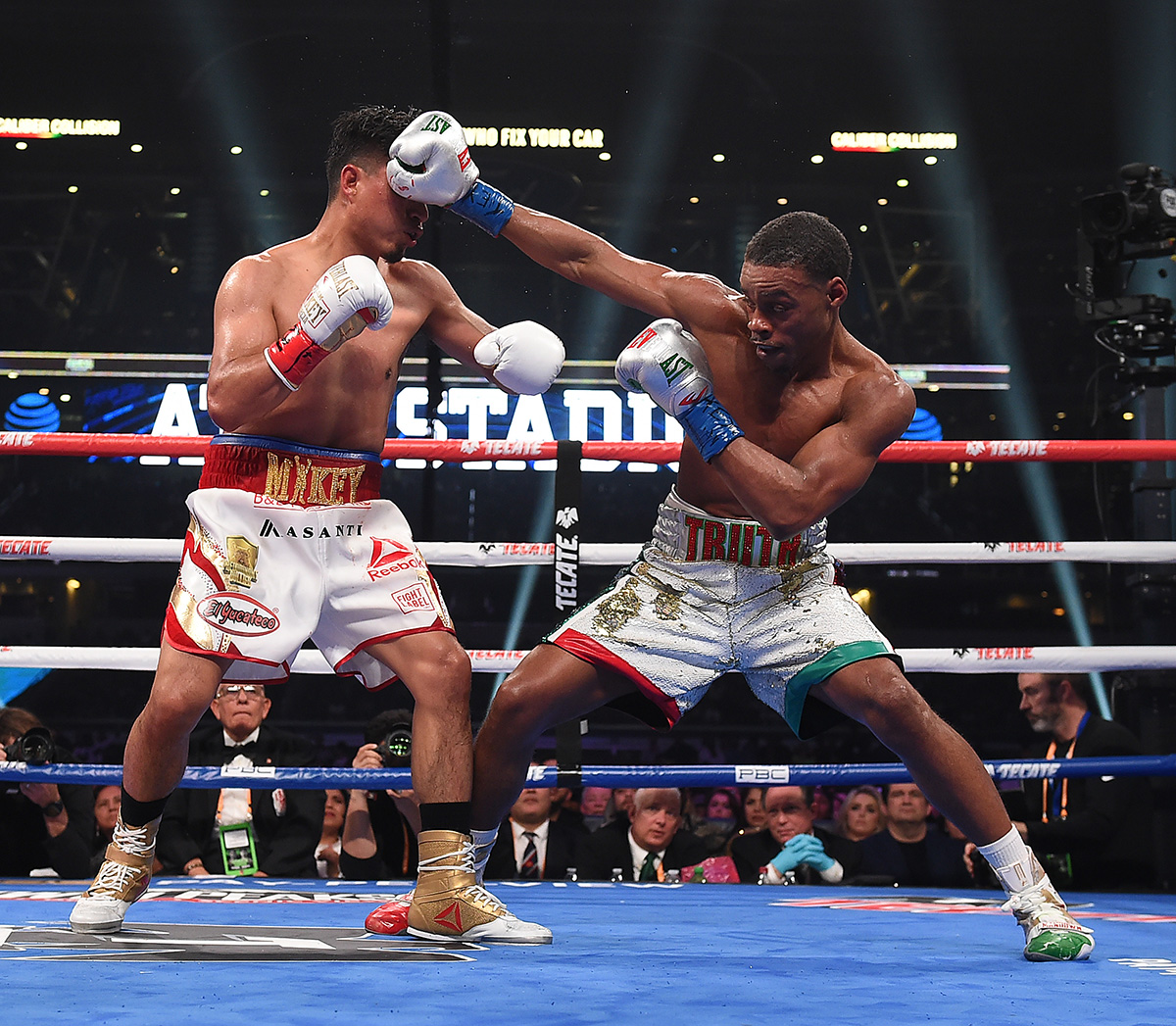 As the middle rounds played out, it became apparent that Spence was in control and building a lead on the scorecards. It was also becoming clear that the hometown fighter wasn’t “beating up the smaller man” as many predicted; he was out-boxing and out-crafting him. Spence’s footwork was precise and his southpaw jab was giving Garcia fits. Ever the proud warrior, Mikey would respond any time Errol landed a hard shot or flashy combination, but it was only one punch at a time.

By the championship rounds, Spence had not only built an insurmountable lead, he was completely dominating in spots. The loud Mexican-American fans had all but been silenced; an uneasy hum now filled the stadium. Errol came out absolutely determined in the 11th, teeing off with combinations upstairs and downstairs that had Mikey reeling. But the four-division titlist bit down and gritted it out, taking what many felt would be an early-rounds blowout to the final round. There were members of Garcia’s team who questioned whether they should stop the fight, but he demanded to come out for the twelfth and saw the final bell.

The scorecards were a foregone conclusion, as judge Glenn Feldman scored it 120-107 (scoring the 11th round 10-8), while Alex Levin and Nelson Vasquez both saw it 120-108. Spence dominated in every punch category, landing 345 of 1,082 total (32%), to just 75 of 406 (18%) overall for Garcia. After the bout, Spence (now 25-0, 22 KOs) talked about wanting to prove he could box at a high level. “Throughout training camp, a lot of commentators thought he (Garcia) was too smart and I couldn’t box as well as him,” he said. “I showed I can box and I can move my head if I want to. I had the size and reach advantage, so why not use it to take away the jab? It’s a weapon for me and it takes away one of his weapons.” 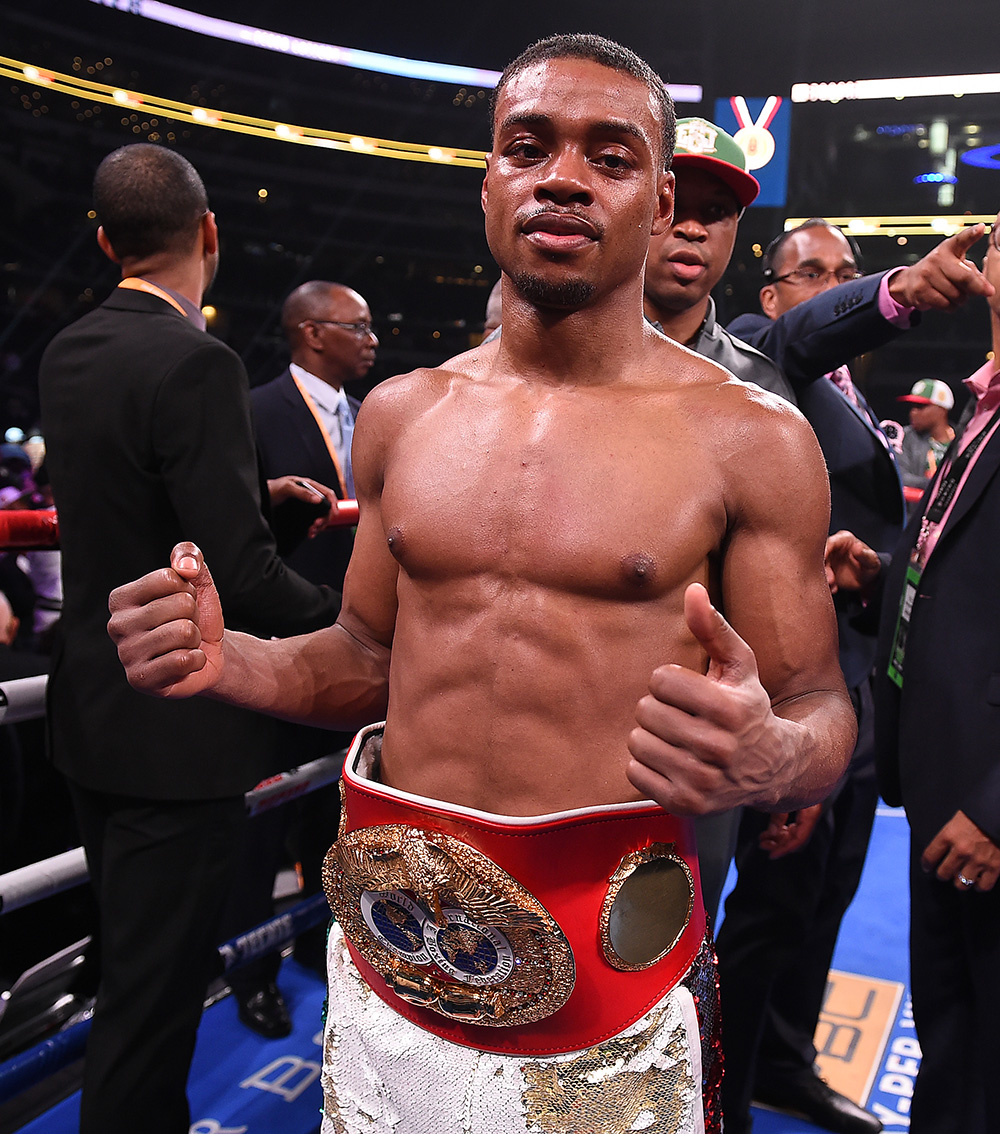 For what it’s worth, Garcia (now 39-1, 30 KOs) didn’t show much damage on his face after taking so many punches.  He was all smiles after losing his first professional bout. “We just went 12 rounds with a great welterweight champion,” he said. “That’s a feat no one has done recently. I’m proud of what I was able to do. I have to go back and think about it. I will probably go back to lighter divisions, but we’ll have to think about it.”

After the fight, Manny Pacquiao joined Spence in the ring. “He’s broken records here before,” said Spence on fighting Pacquiao. “He’s a legend in the sport and it’d be my honor to fight him next.” “Pacman” seemed interested in facing Spence as well. “Yes, why not? We’ll give the fans a good fight,” he said. “I’m so happy to be here in Dallas and I hope I will be back here soon.” Pacquiao has already fought twice in “Jerry World,” scoring dominant unanimous decision victories over Joshua Clottey and the much bigger Antonio Margarito. However, that was a much younger, more dynamic version of the Filipino senator.  The future Hall of Famer would be a massive underdog against this prime version of “The Truth.”