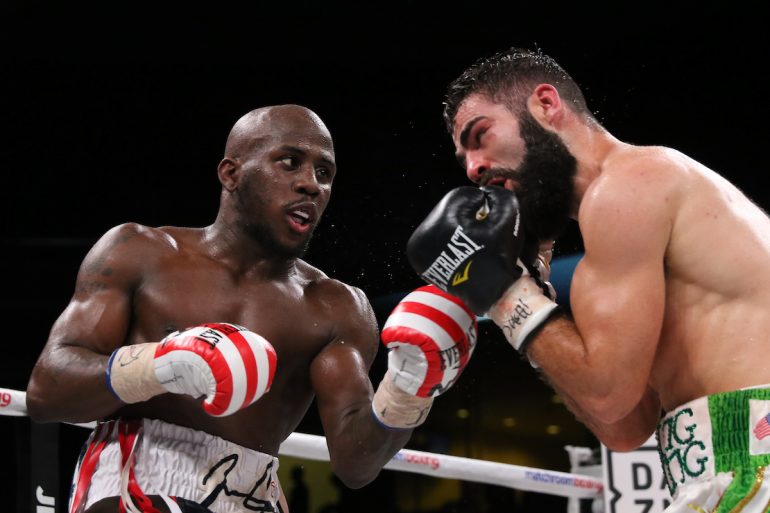 PHILADELPHIA — Jono Carroll popped IBF super featherweight champion Tevin Farmer with some rights to the face, then turned to the cameras and smiled.

Too bad it was a poster of Farmer hanging in Carroll’s dressing room prior to their fight Friday night at Temple University’s Liacouras Center.

The actual, real-life Farmer proved to be a little harder to hit.

Farmer successfully defended the IBF super featherweight title for a third time with a lopsided unanimous decision over the very game, stubborn Irishman Carroll (16-1-1, 3 KOs) in a battle of southpaws.

Judges Dave Braslow and Sylvain Leblanc both had it 117-111 for Farmer, while judge John Poturaj had it 117-110 for Farmer. Respected ringside observers, however, saw a far closer fight.

Many, including RingTV.com, saw the fight as a 114-114 draw, with Farmer making a late charge to make it even.

“I didn’t slow down, he was doing good work to the body,” Farmer said. “I hurt my right hand in the fourth round. I don’t think it’s that serious.

“It felt great coming from where I came from. I started boxing when I was 19 and there were a lot of guys who could have done what I’m doing. I’m grateful I have a team around me to make this happen at home for me.”

Farmer came out the aggressor in the first round, working behind the jab. Carroll, right side of his forehead building a reddish hue, closed the round with a flurry and a few choice comments as the bell ended the first.

Carroll may have connected with the more effective punches in the first. He carried that confidence into the second, pounding away at the body. Carroll appeared to be the more heavy-handed puncher.

The Irishman closed the second with a right uppercut, and through the first two rounds, it appeared he also had the upper hand.

Within the first 30 seconds of the third, the two fighters fought inside. Carroll, again, appeared to be getting the better of the exchanges, digging to the body. But with 1:30 left in the third, Farmer unfurled a right uppercut that caught Carroll’s attention.

Farmer caught Carroll again coming in in the last :20 of the third, and a cut appeared to be forming over his right eye, as Farmer closed the third with a right hook. 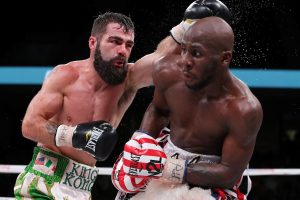 In the fourth, Carroll used his crowding, pressure tactics again. But Farmer stepped back and created some distance, using his jab. Still, Carroll pressed forward, making Farmer fight his fight.

Through four, Farmer couldn’t keep Carroll off of him.

With 1:10 left in the fifth, Farmer connected with a right to the head. It seemed to change the course of the round. Carroll was flat footed. He wasn’t crowding Farmer as he had earlier. His nose was beginning to swell and his right eye was starting to open up.

The fifth was pivotal in getting Farmer back into the fight.

With 2:25 in the sixth, Farmer tagged Carroll coming forward with a left. A minute later, Carroll was back on top of Farmer, hitting him anywhere he could. With :30 left, Farmer landed a right hook to the head and as time wound down in the sixth, it was possible Farmer had climbed back into the fight.

Farmer on occasion got his hands stuck in the pastel strands on the sides of Farmer’s red, white and blue trunks. It’s certainly something he won’t repeat again.

Farmer landed a right uppercut in the last minute of the seventh, but Carroll may have won the round on activity.

In the eighth, Farmer kept connecting on the right uppercut to the body. On occasion, he went up top and chopped a right off of Carroll’s head. Carroll had very little on his punches, but again, he threw the greater number of shots.

Possibly sensing his title slipping away, Farmer began the ninth with a higher activity rate. He was up on his toes, ponging shots off of Carroll’s face, causing a steady stream of blood to flow down the right side of his face.

But there seemed to be an energy leak in Farmer’s game.

The defending titlist stood between the eighth and ninth rounds, as his trainer, Chino Rivas gave him suggestions.

In the 10th, Farmer connected more to Carroll’s face. The Irishman had a bloody nosed and blood was again falling down the right side of his face. But Carroll wasn’t going anywhere. Carroll, like Farmer, was visibly fatigued.

Carroll had an issue with loose tape on his gloves, which delayed the beginning of the round. Farmer then landed a left-hand lead. Then things got really interesting when Farmer slammed a right hook to Carroll’s chin, which wobbled the challenger.

Carroll was in serious trouble when the 11th ended.

“We swayed off the game plan,” Carroll said. “He’s world-class opponent. The plan was to touch the jab all night long and counter the back hand. At the end of the day, I put it all on the line.

“If I left that ring with an ounce of energy left, I would have been annoyed with myself. Tevin was the better man tonight. I left it all in there tonight.”

Carroll said he wasn’t that hurt in the 11th. His ear drum burst, which messed up his equilibrium.

A Farmer left with 2:16 left in the last round caused a Carroll sweat halo. Farmer, now feeling he had Carroll where he wanted him, closed in on the Irishman, tapping him with a right on the chin with just over a minute left in the fight.

Farmer closed with a barrage of shots, before referee Gary Rosato broke the two up at the final bell.

For two guys with nine combined knockouts, it was a very exciting give-and-take fight.

After everything was finished, WBA super featherweight champ Gevonta “Tank” Davis’ name was broached—as it invariably is when Farmer is involved.

But Eddie Hearn, who co-promoted Farmer’s Philly homecoming with Lou DiBella, had an interesting comment, stating, “The whole world wants to see that fight, but Tevin has worked himself into a position now where he’s a valuable commodity in the American fight game.