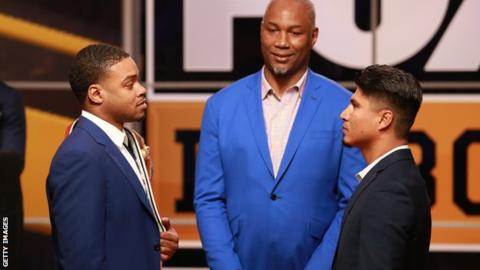 Errol Spence has a clear size advantage in his intriguing matchup with Mike Garcia.
13
Mar
by Michael Woods

As far as two PPV A sides go, this fight which will unfold Saturday features two dudes who are more likely to be selling the fight based on the merits of the matchup, rather than their facility for trash-talking, for hyping up the buy rate by fanning the flames with verbal majesty.

Yeah, Errol Spence and Mikey Garcia are pound for pound pugilists and no, they aren’t top 20 guys in the smack talking department.

That’s quite alright, the game needs a variety of sorts of matchups to attract masses of eyeballs, and an artisan coming from a lower weight class against a power punching young gun mashup has caught hold of the fight game aficionado pretty good as we count down to the PBC on FOX PPV clash, to unfold in Texas.

On Wednesday, the principals gathered for a final presser and took queries from the emcee and media, and also aimed a couple darts at each other, just enough to have some of us keyboard tappers raising our eyebrows at the change of pace.

It was the Texan Spence, age 29,  who showed a bit more of an edgy side, and not in a bad way. Whereas I heard one or two pundits opine that they thought the 31 year old Garcia got under the skin of Spence, I took Spence’s demeanor to be spot on for fight week. He’s chomping at the bit, is the Texan, to be finished with repetitive press queries and instead get to smashing his Everlasts into the face of a foe.

Here are some of Spence’s top lines from the event, which was emceed by Heidi Androl, who did a pretty solid job peppering the aces with questions:

“This will be a one sided massacre…I’m gonna punish him, he’ll wish he took his brother’s advice not to take this fight,”  he said. Day-um, tell us how you really feel, bro!

“The size difference won’t matter. Skill for skill and talent for talent, I’m more dominant than him in every aspect. I’ll beat him at anything he wants to do. On paper he’s the toughest opponent to date, but once we get in the ring we’ll find out.” You had to like that level of confidence, I think, it seems like Spence is believing as much as is possible in his skill set.

“I don’t think anyone has the power to knock me out. We don’t allow that kind of mentality into training camp. I hope he tries though.” Wow…that could be seen as hubris, right? But again, I interpret the confidence in his chin positively. The Texan sees himself as an A plus fighter and it will be up to Garcia to prove him wrong.

“Mikey is supposed to think he’s going to win this fight. He called me out, so they obviously think that they see something. I’m glad he’s as confident as I am. I hope he keeps that same energy inside of the ring.” Spence went at this theme a few times; he busted on Garcia for talking tougher in interviews when he wasn’t around, mocked him a bit and I thought maybe scored a point on the unofficial cards.

“When you’ve got your homeboy out here in front of me and doing different interviews with Elie [Seckbach] and all that other stuff when you want to talk trash … with your dad and your brother, you want to say other things, but once you get here, you want to be humble and show a lot of respect. No, keep that same energy you have when you’re in Cali’, when you’re in your gym, that you have here.”  He was more than insunuating that Mikey saves his bravado for times when Spence isn’t there and yes, that’s a hard slap.

“This win makes me pound-for-pound number one. Mikey has a great record and a big fan base and I feel like winning this fight turns me into a star. Everyone wants to take Floyd Mayweather’s place as the face of boxing, and this puts me on the right track to become the face of boxing and the best fighter in the world.” This is new for Spence; within the last year plus, he’s more willing to proclaim where he believes himself to be on the P4P ladder. Again, I like this public display of confidence.

“This is a legendary fight. This is where we see what fighters are made of. There have been a lot of great fights when little guys came up and beat a bigger fighter. You can’t ever write off the little guy. This is going to be a hard fight.” Hey, the kid is getting decent at selling, never a bad trait to have in our sport, with this PPV model still in play.

“I know I’m the best fighter in the world and I’m going to show it Saturday night. I’m going to punish him and make him wish he took his brother’s advice to not take this fight.” Hardcore note to end on; sent a mini shiver up my spine, if not Mikey’s.

And Garcia got his licks in as well:

“I have all the tools and all the skills needed to beat Errol Spence Jr. When it comes to timing, speed, reflexes and defense, you name it, I’m better.” No confidence lacking from either man, it appears.

“Here in Texas, it’s like a second home. I’ve won two world titles here. Having great fan support at the grand arrival was a special moment for me.” He said he expected Spence to have more rooters there, and he scored an offensive point when he noted that more Mikey fans attended the arrival event in Texas than Errol rooters.

“I have to fight the best fight of my life. If I don’t, then I can’t overcome the challenge. You don’t win a fight with size and weight. We fight smart, we fight intelligently and pick our shots. There are a lot of factors. That’s how I win this fight.” Good stuff, Mikey’s admission of how tough this challenge is. He has eyes wide open, as I’d expect.

“Getting this victory will forever leave my name in the history books. No other fighter is daring to do what I’m doing. I’m here to make history and this fight does that. This fight is about big challenges and obstacles.” Also, I might note, there is potentially limited downside. If Mikey does well, but loses, he still gets credit for stepping up.

“All the attention and buzz about this fight is for real. It’s not often you get a fight like this. Undefeated champions in their prime facing each other. If you want to witness history, you better buy a ticket or the pay-per-view.” Mikey has also improved as a salesman, it seems…

Spence showed that game face when he took a shot at Shawn Porter, working in the Fox booth doing analysis, with Kate Abdo and Boom Boom Mancini; he said Porter basically dodged him.

Yeah, looked to me like the one guy I’d rather not face come Saturday night was Errol Spence. He wasn’t surly, exactly, but you get the sense he’s very amped to throw fists in the face of Mikey. Which is how it should be, no?

How did you read this presser, readers? Talk to us in the comments section; did you pick up on anything in body language, or in phrasing? Fire away!