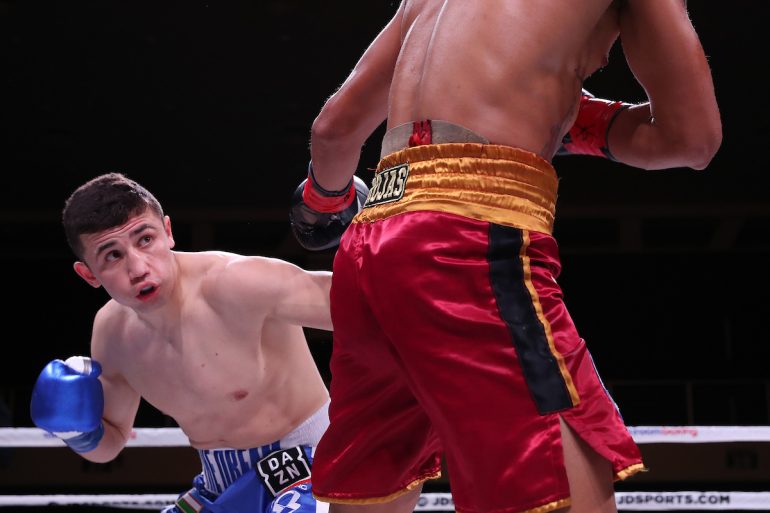 Many, many folks who attended the Saturday fights at Turning Stone Casino in Verona, NY, for a card topped by a Dmitriy Bivol light heavyweight title defense against Joe Smith came away mightily impressed by a low on the card prospect.

Israil Madrimov entered 1-0, but left with another W, and a load of new admirers.

I reached out to the hitter, who hails from Uzbekistan, to get a sense of who he is, where he comes from, and where he’s going.

First off, I wanted to get a sense of his demeanor…so I asked, do YOU think you won the weekend, of all the fighters?

“I don’t think so because Dmitry Bivol, my teammate was in a very important fight and defended his world title,’ said the 24 year old, who campaigns netween welterweight and junior middleweight. He debuted as a pro in November, winning a TKO6 against 10-2 Vladimir Hernandez in Atlantic City.

On Saturday, Madrimov, with ample power in each hand, bested Frank Rojas (24-3, 23 knockouts), a Venezuelan power puncher. The power was most evidenced by the Uzbek, who flurried and dropped Rojas, and then picked up where he left off to drop him hard to the mat. Game over, 1:56 of round two. He dropped him lefty and finished him off righty, for the record.

“I was very comfortable in the ring using footwork and distance,” Madrimov told me. “Not trying to be cocky but I knew I could knock him out in the second round either with a hook to the head or a body shot. I used the first round to get warmed up.”

The prospect took up fighting at 11 years old, when he went to a gym near his hometown of Khiva, Uzbekistan. “Once I started boxing I felt great and within two years I was a national champion. My goal is to become a world champion, hopefully that will happen within the next year.”

I recommend you get this guy on your watch list; he’s gunning for top names, sooner rather than later…

“I want to fight any of the champions at 154, Jaime Munguia, Jarrett Hurd or Tony Harrison,” Madrimov declared. “I’m ready for them right now.”