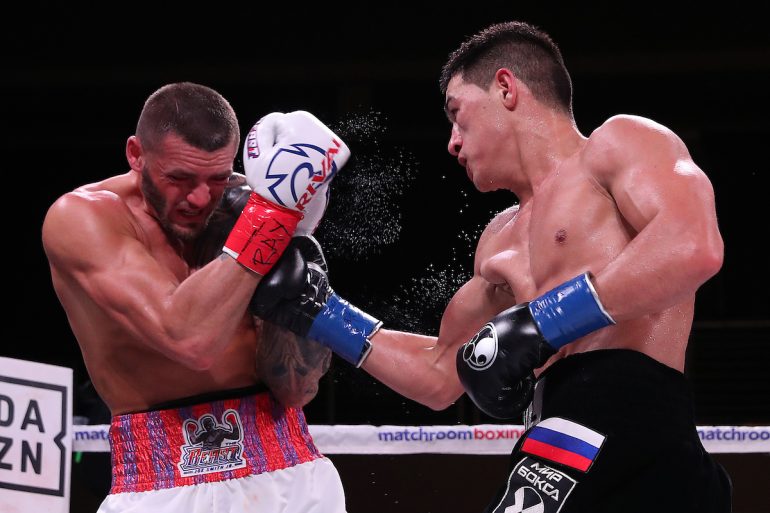 With less than ten seconds remaining in the fight, Dmitry Bivol landed a right hand and a left hook counter, then did it once more to send Joe Smith Jr. reeling into a corner. For twelve rounds he had landed as clean and as frequently as he’d wanted to but couldn’t hurt his opponent, and now he’d had his chance to get the knockout.

Of course this fight was far less dramatic than that night in 1990, and Bivol rightfully earned the unanimous decision on Saturday night, with two judges scoring it 119-109 and the third at 118-110, allowing Bivol to retain the WBA light heavyweight title at Turning Stone Casino and Resort in Verona, N.Y.

The CompuBox numbers told the story of Bivol’s domination: 714 punches thrown to 395 from Smith Jr., while Bivol outlanded him by an unbelievably lopsided margin of 208 to 39, for a 29% to 10% edge in accuracy. Still Smith, a blue collar worker with the Laborers Local 66 union out of Long Island, was able to rock Bivol’s world with right hands in rounds three and ten.

“I little bit lose my balance, I saw this [punch] but I didn’t have enough time to react,” said Bivol, who was stunned at the end of round ten by a right hand to the temple and needed the ropes to balance himself as he walked back to the corner.

Other than those rough spots, Bivol was in compete command, using his footwork and jab to bedevil Smith Jr. for most of the night. Smith showed his frustration in round 9 by body slamming Bivol while in a headlock, but a point was not deducted.

The 28-year-old Bivol, who was born in Kyrgyzstan but lives in Russia, was extended the twelve-round distance for the third straight time.

“In the end of the fight I felt I can knock him out but it’s not my goal,” said Bivol, who was headlining his first card since coming over to DAZN after HBO left the boxing business. “I want to show the good fight with good defense…intelligent boxing, because not only power can make good fights.”

Smith Jr. (24-3, 20 knockouts) had made his name by being the only person to knock out Bernard Hopkins in 2016, but had been plagued by inactivity, fighting just 105 seconds since suffering a broken jaw in a decision loss to Sullivan Barrera nearly two years ago.

In defeat, Smith Jr. showed the durability and courage which has kept him on his feet throughout the entirety of his career, having never been knocked down or stopped.

Bivol remains in a good position at 175 pounds, rated no. 3 by The Ring in a division where all four belts are held by fighters who hail from Eastern European countries. Smith Jr. entered rated no. 9 by The Ring.

“I just ended this fight and want to relax, but I’m ready to fight for another belt, it doesn’t matter for me who it will be,” said Bivol, who said he could also move down in weight to 168 for bigger opportunities.

“I want a big fight to be remembered in this sport and to give a good fight and intelligent boxing to the fans,” said Bivol.