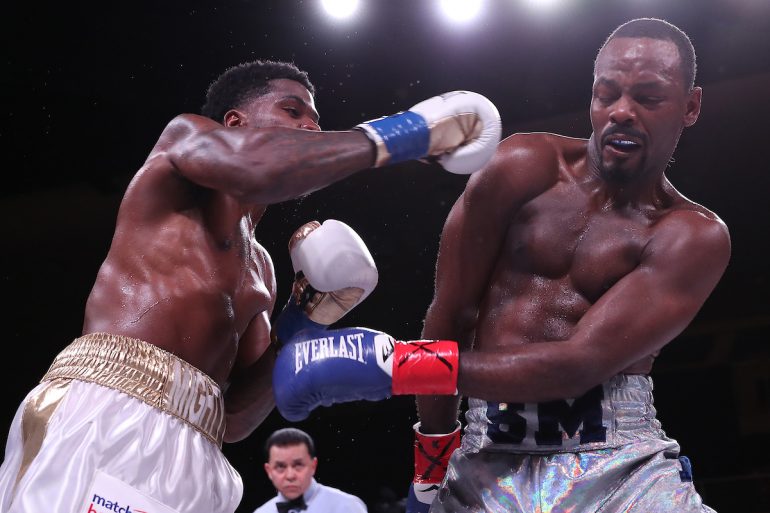 Hooker lands a right hand on LesPierre in their fight in March of 2019. Photo by Ed Mulholland/Matchroom Boxing USA
09
Mar
by Ryan Songalia

If Maurice Hooker was diminished by his struggles to make weight the day before, it didn’t manifest itself over 12 rounds against Mikkel LesPierre.

Hooker cruised to a unanimous decision Saturday night at the Turning Stone Resort and Casino, retaining his WBO junior welterweight title for the second time by the scores of 120-107, 119-108 and 118-109. Despite needing four trips to the scale to make the 140-pound limit, Hooker managed to throw nearly twice as many punches (928 to 488) and land more than double (240 to 103) than LesPierre for a 26 percent to 21 percent edge in accuracy.

When the final bell rang, the Dallas native Hooker embraced the Brooklynite LesPierre and spoke at length. Hooker said he gave LesPierre credit for fighting well and expected him to be back at the championship level again.

LesPierre, 34, had plenty of opportunities to show his heart as Hooker, 29, rained down punches from all angles on the southpaw, landing double right hands and body punches throughout the fight. LesPierre seemed to go down from a combination in Round 5 but it was ruled a slip, and he received a momentary breather when Hooker’s mouthpiece had to be replaced.

Hooker (26-0-3, 17 knockouts) finally scored the first official knockdown of the fight in Round 9 with LesPierre (21-1-1, 10 KOs) on the ropes, sinking the New Yorker with a left hook to the body. LesPierre rose up at the count of 9.9 and looked to be finished as Hooker pressed his advantage. LesPierre showed tremendous courage by firing back with authority to end the round and making it to the bell.

“I gave myself like a C-minus tonight with my performance. I wasn’t good but I had to push,” said Hooker, who needed four trips to the scale and nearly an extra two hours to shed the final half pound on Friday. “I know everybody gonna come after me now for this performance, but I lived and I learned.

“If you judge me from this fight, better not get in the ring thinking the same thing, because I’m coming for you.”

Hooker called out essentially the whole division for unification fights, inviting them all to fight on DAZN, but his next opponent may be Jack Catterall, his mandatory challenger at ringside. The British Catterall (23-0, 12 KOs) is a southpaw like LesPierre, and earned the right to face Hooker by virtue of his victory over Ohara Davies in October.

“Wait young grasshopper,” Hooker said, identifying the 25-year-old in the crowd. “You’ll get your turn.”

Callum Johnson opened the main card on DAZN with a dominant third-round stoppage of a tough but overmatched Seanie Monaghan. It was a solid bounce-back performance for the 33-year-old from the U.K., who dropped IBF light heavyweight titleholder Artur Beterbiev in his previous fight but was stopped in four rounds.

This time the fight didn’t go that far as Johnson (18-1, 13 KOs) drew blood from the game Long Islander’s face in the opening round. With 40 seconds remaining in the second, Johnson drew Monaghan (29-3, 17 KOs) into the corner and landed a counter right hand that hurt Monaghan and sent him backpedaling, scoring the first knockdown.

Johnson followed up immediately, landing two overhand rights and a left hook that sent Monaghan down a second time. The bell sounded to give Monaghan a brief reprieve, and trainer Joe Higgins asked him between rounds if he wanted to continue. Monaghan answered in the affirmative, but the fight was stopped 23 seconds into the following round as Johnson pressed his advantage along the ropes.

💪 An impressive bounce-back for @CallumTheOne.

“I’m ready for that top level again,” said Johnson before adding that he’d like to face the winner of the main event, a WBA light heavyweight title fight between Dmitry Bivol and Joe Smith Jr.

“I think I probably needed that loss more than I needed to win mentally to make me realize how much I want that top level, that world title, and make me realize the finer things I have to do to give me that extra 5 percent.”

Monaghan, 37, has now lost three of his last four fights.