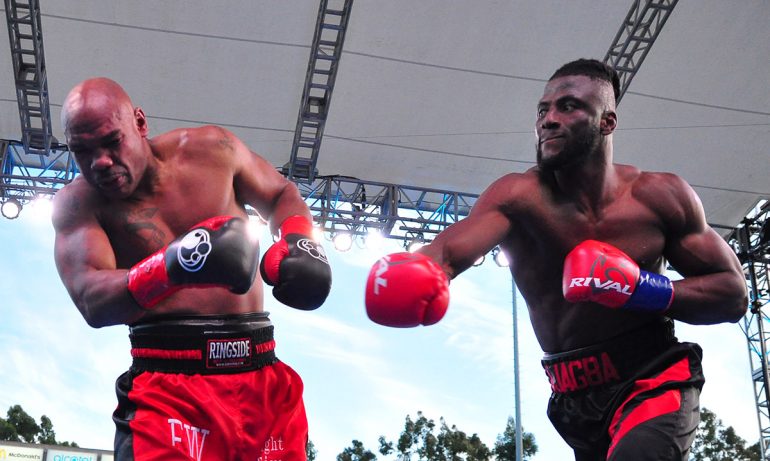 Ajagba (9-0, 8 knockouts) may not have broken much a sweat in his two round dismantling of the 46-year-old veteran southpaw. Midway through the first round, the hulking prospect dropped Mansour with the very first power right hand that landed cleanly. Mansour (23-4-1, 16 KOs) flopped forward after getting thrusted into the turnbuckle in that instance, and soon after getting up gingerly, he found himself back on the mat again for a second knockdown scored before the opening round ended.

2 Knockdowns in 1 minute 👀. Ajagba putting on a show in the 1st! pic.twitter.com/nR4miBFMOl

Ajagba, 24, who is trained stateside by Ronnie Shields, stayed composed even with a hurt fighter in front of him. The power right hand was always set up by a jab, which also kept Mansour from getting on the inside where his bread was presumably buttered. Mansour let out a yell before the second round ended in an effort to bite down and get lucky with a looping left hand, but Ajagba saw everything coming and passed his first test with flying colors.

“I’ve never fought a southpaw in the pros before,” Ajagba explained after the victory. “Ronnie Shields has taught me a lot and given me the plan on how to fight a southpaw and how to use my right hand against them. I want to be the best heavyweight in the world. That’s my dream. I’m going to go home and work hard and prepare for the next fight.” 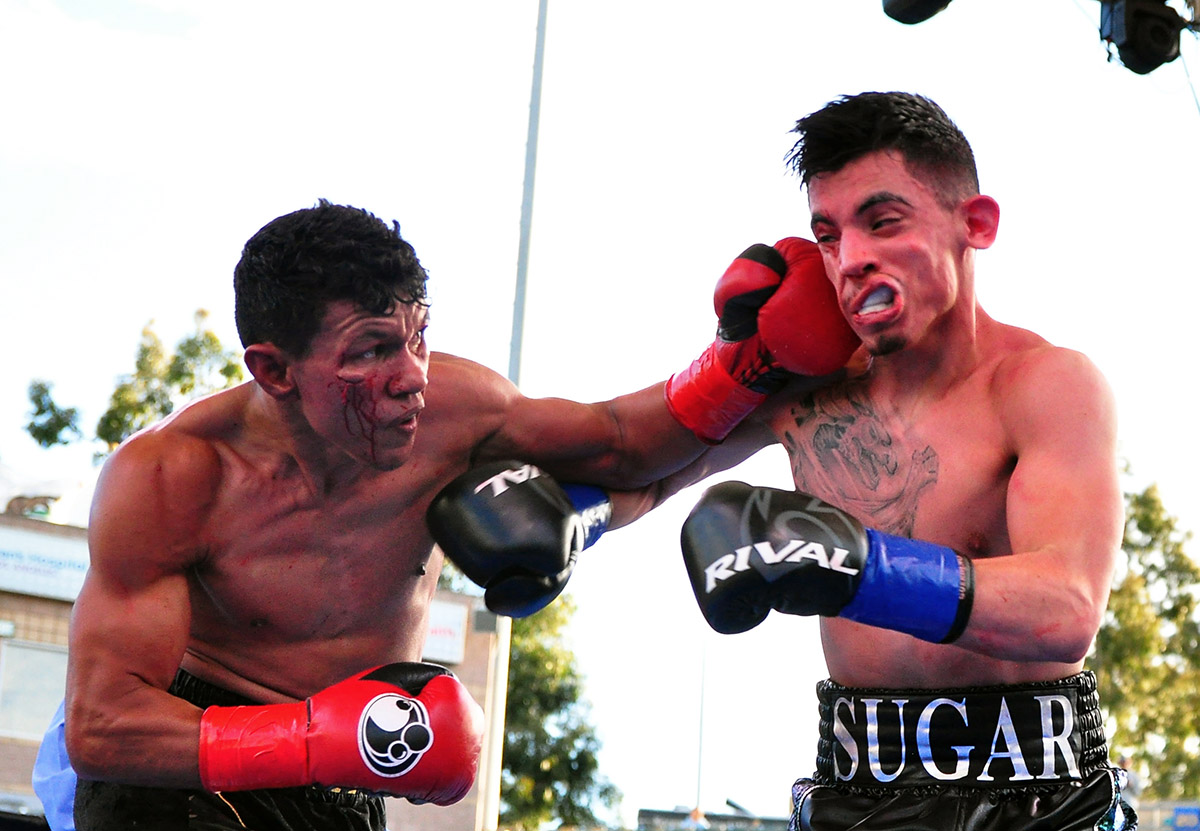 Payano rebounds with win over Vazquez

Juan Carlos Payano got an important win for the outlook of his remaining career after defeating Damien Vazquez by unanimous decision (79-73, 80 x2) and handing the prospect his first defeat with ease. The bantamweight bout was featured on Fox Sports 1.

Coming off a brutal knockout loss to Japan’s Naoya Inoue, Payano (21-2, 9 KOs) looked good up against a green prospect making his proverbial step-up. Payano unleashed his overhand left constantly to not only get out to an early lead in the second round but continually trouble Vazquez throughout with that same punch. Vazquez (14-1, 7 KOs) had trouble finding sort of rhythm against the veteran southpaw as he found Payano with his own head accidentally in the first half of the contest.

Payano, 31, got cut twice by head butts starting in the fourth, as did Vazquez in the fifth, but the flowing blood wasn’t getting in the way of the Dominican landing that left off the jab. It almost seemed like Vazquez wasn’t seeing it, and in the sixth round, the 21-year-old was hurt badly. On wobbly legs, Vazquez somehow managed to get out of the round by clinching, though he would end up getting caught again by round’s end.

Stanious (8-0, 5 KOs) didn’t take long to implement and time his combinations on the inside to start getting frills from the crowd as early as the opening round. The Lithuanian varied his attack nicely — attacking the body and head of his Puerto Rican foe and highlighting his arsenal with an uppercut — but Figueroa proved himself tough by the end of second round where Stanionis was already gunning for a knockout.

Figueroa (11-2, 3 KOs), a southpaw, gave him a fight in the third round, which produced good action, but the constant pressure was too much to handle as he’d eventually get stuck on the ropes in the middle and late rounds to make it easy for the former Olympian. Moral victories aside, however, Stanionis, who’s trained by Ronnie Shields, gave Figueroa a lesson on offensive pressure and combination punching.

In the opening bout of the card, Ukraine’s Victor Slavinskyi pummeled Luis May for six rounds to earn a unanimous decision (60-54 x2, 59-55) victory. Training under the derision of Jose Santa Cruz out of Los Angeles, Slavinskyi (8-0-1, 4 KOs) opened the fight with crushing body shots that led to plenty of opportunity upstairs. The southpaw exploited May (21-13-1, 8 KOs) wherever he pleased throughout, hurting the Mexican to the body badly in the middle rounds, and ended the fight looking unscathed. 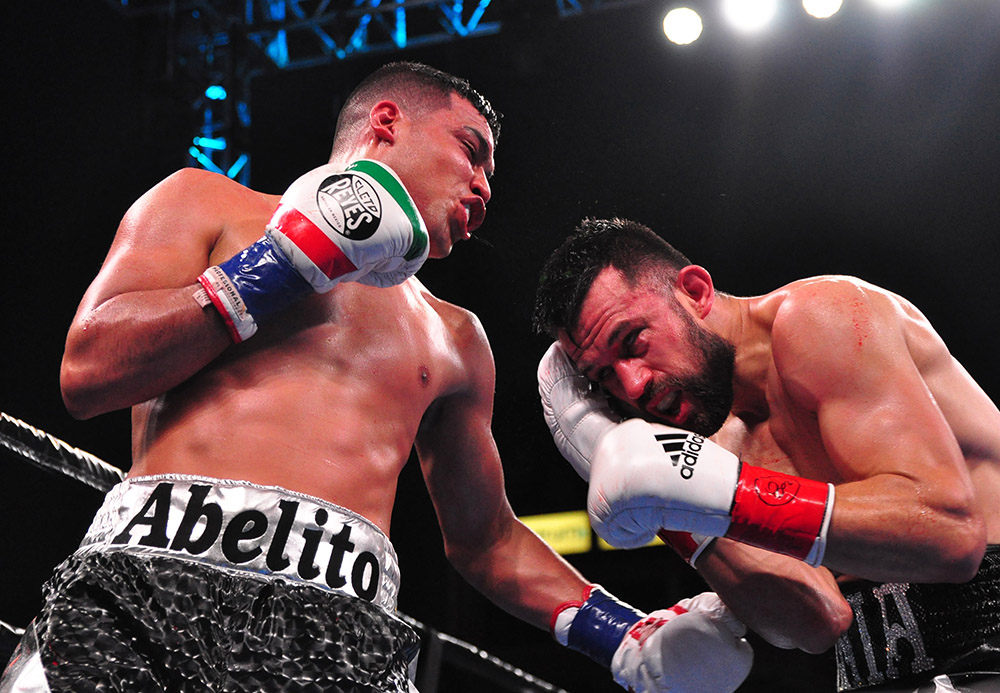 Featured as a swing bout on Fox, Abel Ramos overcame an early knockdown to beat Francisco “Chia” Santana via unanimous decision (95-94, 97-92, 98-92) in what was a tremendous action fight.

“He caught me on a flash knockdown in the second round,” Ramos (24-3-2, 18 KOs) said afterward. “I didn’t see the punch coming and he caught me a little bit off-balance. As soon as I got up, I was good. I thought I won the fight. I landed more punches. I felt like I was landing all night and I was doing good clean work throughout the fight.”

There was already evidence of a good fight brewing in the opening round of the welterweight bout, but everything changed after a thunderous left hand by Santana dropped Ramos hard to the canvas in the second round. The moment brought a roar from the crowd and there would be plenty more in the following rounds, in which both men were hell-bent on trading leather. Santana acted as the aggressor, forcing his counterpart into reverse much of the fight, but Ramos seemed to concede to that position and countered his foe often with well-placed body shots.

The tide turned greatly in the seventh, when Ramos had Santana badly hurt on his feet for much of the three minutes, and it could’ve been justly ended by referee Jerry Cantu, who was close to stepping in before the round ended. It was an accumulation of shots that hurt Santana, 32, who took the entire eighth round off in order to regain any sort of strength. That resolve didn’t show up until the final round, however, as the action-seeking veteran mustered up the energy to out-throw Ramos in the 10th.

“I was very surprised by the scorecards. I thought I did enough to win. It was very competitive, but I was landing more significant punches,” Santana (25-7-1, 12 KOs) lamented after the loss. “I knew he was a warrior who would come back to fight after the knockdown. I don’t know what else to do at this point, but I’ll always keep my head held high.” 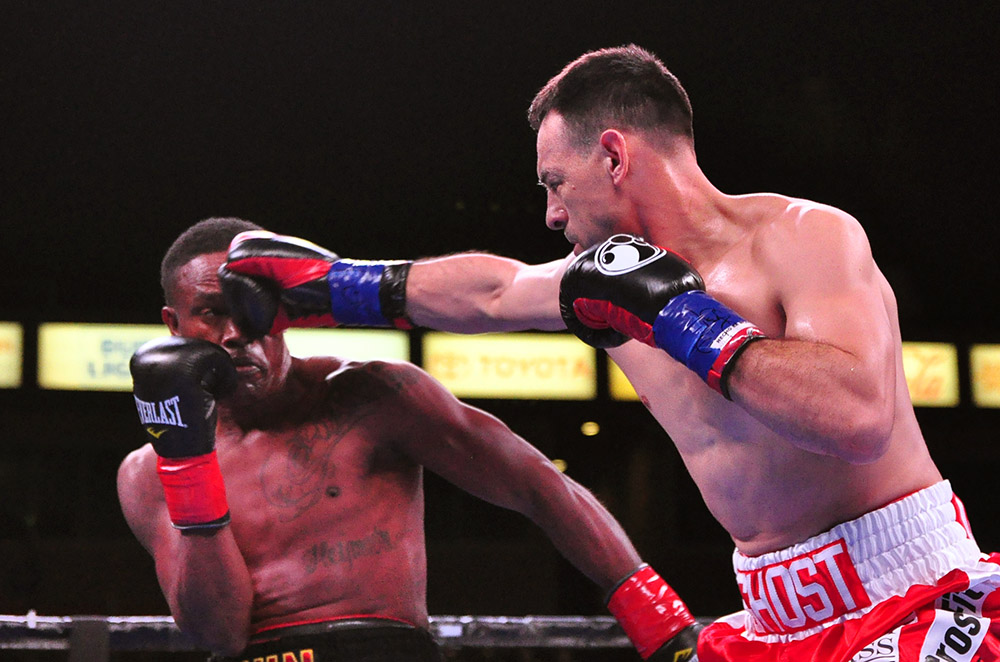 Jesus Cuellar (29-3, 22 KOs) knocked out Carlos Padilla (16-10-1, 9 KOs) in the second round to notch his first win in nearly two years. The lightweight contest was scheduled for eight rounds.

Rolando “Rolly” Romero (8-0, 7 KOs) turned in a one-punch knockout of Nicolas Velazquez (10-5, 3 KOs) in the first round to remain unbeaten. The lightweight contest was scheduled for six rounds.

Indio’s Ruben Rodriguez (5-0, 2 KOs) cruised to victory with a shutout unanimous decision (40-36 on all three cards) over Jeremiah De Los Santos, who was making his pro debut.