For Mikkel LesPierre, winning world title would mean getting to quit his day job 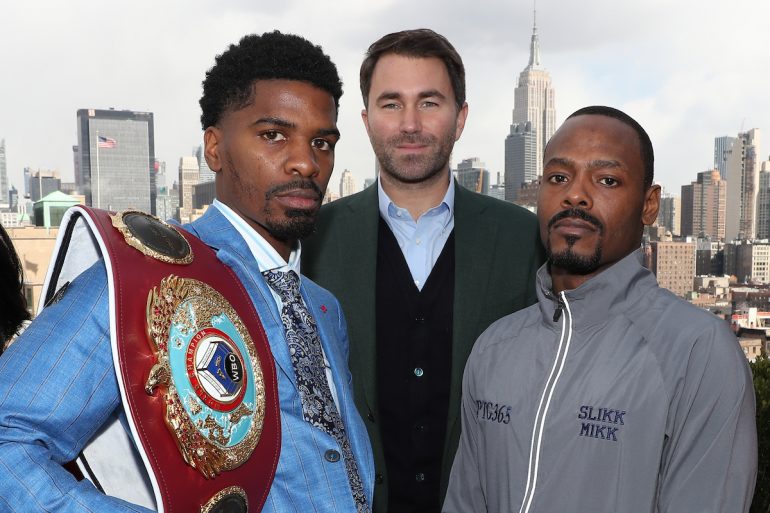 Mikkel LesPierre (R) says Maurice Hooker (L) was able to rise to the occasion as an underdog to win the belt. LesPierre says he intends to do the same now that is in that position. Photo by Ed Mulholland/Matchroom Boxing USA
07
Mar
by Ryan Songalia

NEW YORK — For a month, Mikkel LesPierre has had the life of a professional fighter. Sure, he has had 22 bouts since his debut seven years ago, but he’s never had the luxury of living the life of someone who makes his money strictly with his fists. His day job is working the front desk at the ear, nose and throat department of Mount Sinai Hospital in downtown New York City, checking in patients. Then, after an eight-hour shift, he takes his gear and heads across the East River to Gleason’s Gym in Brooklyn’s DUMBO section, a commute that at best takes 30 minutes by subway.

It’s a way to keep the lights on between his 2-3 fights per year, but also means he can’t dedicate himself fully to being a fighter.

Preparing for such a big opportunity – challenging WBO junior welterweight titleholder Maurice Hooker this Saturday at Turning Stone Resort Casino in Verona, New York – required that he take leave for a month to properly rest and recover. It’s something that he feels he can get used to.

“I’d be able to quit my 9 to 5, I know that. It would be the first step to me being a professional fighter,” said LesPierre (21-0-1, 10 knockouts) when asked how winning a title would change his life.

“I think once I win this world title that’s just the first step to me being able to give the best version of me as a fighter. I want all of my dedication and focus to be just towards training and getting myself prepared and working more on my craft as opposed to having eight hours of my day taken away from that.”

Don Saxby, who took over from LesPierre’s original amateur trainer, Mike Smith, in 2009, says he would often give LesPierre time off from training after seeing him appear lackluster in sparring due to fatigue. “Not every day is a good day for me,” LesPierre admits, owing to his five days of work overlapping with his six days a week of training. 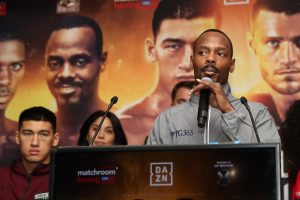 LesPierre’s situation is not unique, especially in a city like New York, where skyrocketing rents and cost of living necessitates many aspiring to higher callings to hold multiple streams of income. But he’s made do, becoming one of New York’s best local ticket sellers on the club circuit. The southpaw counterpuncher had built up his reputation in entertaining clashes with sluggers like Noel Murphy, but it wasn’t until his systematic breakdown of Gustavo Vittori that promoter Lou DiBella began saying he was ready for the big step-up. “Tonight I saw a fighter who can compete at the top level,” DiBella said that night in Astoria, Queens last August.

When LesPierre got the call for this fight, he jumped at it.

“Now or never. I’m not even in a position to turn down an opportunity like that,” said LesPierre, age 34. “That’s a once-in-a-lifetime thing for some fighters.”

The opportunity is a significant reversal of fortune for LesPierre, who came to America from Trinidad and Tobago at age 6 and told The Ring last year in an interview about his rough childhood in Brooklyn’s East Flatbush section, “doing foolishness” in the streets, spoiling his pursuit of his first love, which was playing basketball. LesPierre saw boxing as a second chance at fulfilling his athletic dream. Years before they began working together, Saxby picked LesPierre out among more accomplished fighters to go the furthest.

“I said, ‘See that other kid right there, he’s gonna be the one to do it,’” said Saxby. “I saw a certain discipline in [him] that you don’t find in young guys like that.”

Hooker (25-0-3, 17 KOs) is not unaccustomed to facing undefeated fighters, with his last three opponents having a combined 79-0 record. What he isn’t used to is being the favored fighter, which LesPierre sees as an advantage to himself.

Saxby says they aren’t worried about Hooker’s three-inch height edge, believing instead that his reach is what they most have to negate. He says that Terry Flanagan and Alex Saucedo, whom Hooker defeated by split decision and seventh-round stoppage respectively, had the wrong approach for dealing with the wiry-framed fighter from Dallas, Texas.

“They kept trying to pressure him, but they were not going to his body — they played into his hands. They were tailor-made for him, but Hooker hasn’t fought a slick guy, and the guys he had draws with — no knock on him, he’s a world champ — but two of those fights he lost.

Is his guy ready for the big stage? “He’s exuding confidence now,” said Saxby. “He’s not the least bit intimidated.”

LesPierre and team opted to fly up Thursday morning over taking the four-hour drive towards Upstate New York. They’re expecting at least 100 of his fans to make the trip up for the card, which will be shown live on DAZN beginning at 7 p.m., as part of the card headlined by WBA light heavyweight titleholder Dmitry Bivol defending against Joe Smith Jr.

If he gets the win, the only reason LesPierre would have to return to the office is if he catches the flu.